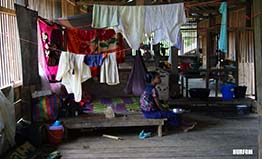 HURFOM calls on governments, ethnic armed groups, civil society organisations, donors, and the international community to end the human rights violations which are causing people to flee their homes, and to aid all refugees, asylum-seekers and displaced people.

According to the Global Peace Index there are currently 68 million refugees and internally displaced people in the world, the most since records began following WWII.

In Burma, refugee and IDP crises are escalating across the country.

There are gross violations of human rights happening right now in Rakhine, Kachin, and Shan states in particular.

Over 700,000 ethnic Rohingya have been driven from their home in Rakhine State since August 2017. The UN described the attacks as ‘a textbook example of ethnic cleansing’. Human Rights Watch documented widespread gang rapes carried out by members of the Burmese military against Rohingya women and girls, as well as killings, arbitrary arrests, and mass arson in hundreds of Rohingya villages carried out by Burmese security forces. The Burmese military has denied all accusations. Some 40,000 Rohingya women and girls living in refugee camps in Bangladesh are pregnant and due to give birth in the coming weeks. As the monsoon rains hit, hundreds of thousands of Rohingya refugees currently living in refugee camps are in danger from flooding; several fatalities have already been reported.

In Kachin State, the conflict between the Burmese military and the Kachin Independence Army has escalated since January. A number of civilians have been reported killed, and thousands have fled their homes since the start of the year, according to the OHCHA. The UN estimates that there are now around 103,000 displaced people in camps and settlements in Kachin and northern Shan states as a result of the conflict.

HURFOM stands in solidarity with all displaced people in Burma and surrounding countries.

While these gross human rights violations are causing hundreds of thousands to flee their homes around Burma, and must be addressed as a priority, it is important also to remember the ongoing plight of people who have been displaced for years. IDP camps in Mon State – where some people have lived for decades, and to which ever more recently-displaced people continue to move – have been neglected, and their funding has been cut in recent years. 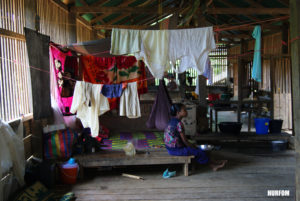 Until the government addresses the root causes of displacement, people will continue to be forced to flee their homes, and the safe, voluntary return of displaced people will be not be possible.

Land confiscation is a major reason many people leave their homes. Land confiscations have increased since government reforms started in 2011, as the government has encouraged inward investment and megaprojects. Encouragement of megaprojects and inward investment has encouraged human rights violations, as well as increasing food insecurity and forced migration.

“I lost ten acres of cashew-nut plantation. They [the army] ordered the residents to move out. But the army hasn’t done anything with my land. They haven’t built any buildings. They just destroyed the cashew-nut plants. … Earlier, when a company built a road to the seaport I also lost my land [because of the construction]. I got compensation that time. But I didn’t get any compensation when the army confiscated my land.” U S—, April 2017

Many people flee their homes because of having to do forced labour for the Burma army.

“Back in our village we were abused by the Burmese soldiers. They were violent and forced us to do porterage. We couldn’t make a living so we decided to leave the village. The porterage took one or two months, so poor families found it very difficult to make a living.” Daw A—, April 2017

One woman told us how the Burmese military forced even mothers with new-born babies to cut rocks for the railway, and how people were sexually abused and beaten, sometimes to death.

“When they were building the railway from Ye to Tavoy, the Burmese military forced us to work on the railway. We had to cut through rock to make way for the railroad. Even mothers with new-born babies had to go and work for them, and had to take their own food. If we did not go to work they would beat us. The soldiers abused the girls. They would take off their longgyis at night. All of my family were beaten by the Burmese soldiers. My father was beaten so hard he could not chew food and vomited blood. My father passed away because of that injury.” Ma K—, April 2017

Others told us how they fled because of army torture.

“I’ve been living here [in Halockhani] for 16 years. In the past, I had been appointed as a village administrator by the Mon community, so when the Burmese army came to the village, they tortured me. … If I had stayed in the village I would have lost my life.” Nai K—, May 2017

Displaced people we interviewed are clear about what they want for the future.

Housing, property and land rights must be acknowledged and restored. The root causes of displacement, including the impunity for human rights violators and the lack of rule of law, must be addressed before there can be safe and voluntary return for displaced people.

As a priority, HURFOM calls on governments, aid agencies, and the international community to restore aid to the IDP camps and resettlement sites.

Aid has been cut in recent years. Daw H—  told HURFOM that she has lived in Halockhani for the past 20 years. “We were supported with rice at the beginning. But they cut the support later. They haven’t supported us for the past two years.” 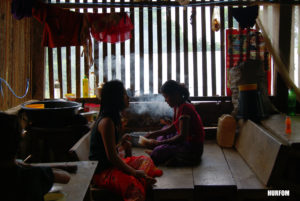 To the Burmese government to:

To the Burma army to:

To Ethnic Armed Organisations to:

To the international community and donor community to:

The United States is Quitting the UN Human Rights Council. Here’s Why That’s...

International Day in Support of Victims of Torture, 26 June 2018
Scroll to top