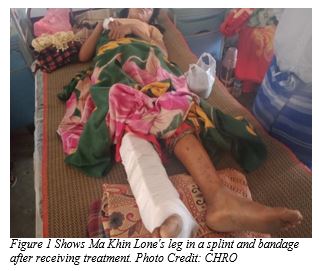 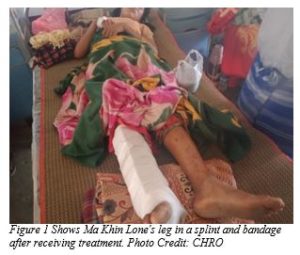 Ma Khin Lone (22) stepped on the landmine while tending to crops at her farm on the morning of 17th Jan. She suffered a broken leg in the explosion. A daughter of U Aung Win from Nga Shar Village, located some 29 miles away from Paletwa Town, Ma Khin Lone was immediately taken to Paletwa Civil Hospital.

In a separate incident, ten days earlier on 7th Jan, the victim’s mother, Daw Hawih Tin sustained an injury to her right leg and face when a landmine exploded under her feet while searching for food in the forest close to her village. She was taken to Paletwa Hospital but was later transferred to a civil hospital in Sittwe, Rakhine State, as her injuries were too serious to be treated at the hospital in Paletwa.

“The family is facing serious financial difficulty since they rely on subsistence farming for their livelihood. The mother’s treatment and hospital costs were supported by funds raised from private donations,” said a Paletwa Town resident who agreed to speak to CHRO.