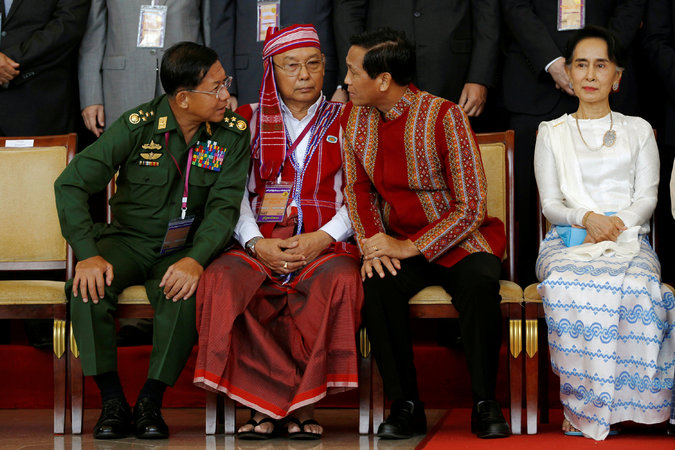 “Without Justice there can be no Peace”
Civil society expectations from the 21st Century Panglong Peace Conference
Today the Government will host the second session of the 21st Century Panglong Peace Conference in Naypyidaw. As civil society organizations (CSOs) have been barred from the Union Peace Dialogue Joint Committee (UPDJC)-led political discussions between the Government, Tatmadaw and ethnic armed organizations (EAOs), ND-Burma has put together a summary of its 14 member organizations’ hopes, expectations and criticisms of the peace process. Our members’ key recommendations are as follows:

● Include all ethnic armed organizations in the political dialogue in order to make Panglong all-inclusive.
● Include civil society organizations in the political dialogue to benefit from their local expertise and community trust.
● Ensure any final peace deal commits to remove the Tatmadaw’s immunity clause from the 2008 Constitution in order to end impunity.
● Ensure any peace deal includes language acknowledging that human rights violations have been committed by all sides and that the Government will need to provide redress for victims.

“We welcome the efforts for peace. But as long as Panglong is not inclusive, peace is very far”

Each of ND-Burma’s members said that they welcomed the peace process and stressed their desire for it to succeed. However, member organizations also argued that lasting peace could not be found under the current architecture of Panglong due to its lack of ‘inclusivity’. This was in reference to the Government’s exclusion of EAOs that have not signed the Nationwide Ceasefire Agreement (NCA), as well as civil society, from the core political negotiations of Panglong.

All members called on the Government to include all EAOs in the UPDJC-led political discussions, regardless of whether they have signed the NCA or not. Currently, nonsignatory EAOs have been invited as ‘special guests’ to Panglong, allowing them to submit papers to the and attend ceremonial meetings. At the time of writing the Northern Alliance of seven EAOs had decided to take up the invitation and attend as ‘special guests’, whereas the seven members of the United Nationalities Federal Council(UNFC) had not. These two groups of non-signatories account for 80% of rebel troops in Burma.

Members also highlighted the fruitlessness of peace talks if heavy fighting continues in northern Burma. The Kachin Women’s Association of Thailand (KWAT) in particular criticized the Tatmadaw’s ramping up of offensives against Northern Alliance member EAOs in advance of the Panglong conference. KWAT General Secretary Moon Nay Lin called this a “callous policy designed to pressure non-signatories into signing the NCA.”

Members also criticized the fact that non-signatory EAOs have not been permitted to hold national level political dialogues. Angshuman Choudhury of the Institute for Peace and Conflict Studies has highlighted the deadlock this can create as certain EAOs do not wish to sign the NCA without consulting their ethnic support base.1 The KWAT has echoed this sentiment and urged the Government to respect EAOs as representatives of Burma’s ethnic nationalities, regardless of whether they have signed the NCA or not.

The All Arakan Students’ and Youths’ Congress (AASYC) also criticized the fact that national level political dialogue in Arakan State had been blocked by the Government, citing ‘sensitivities’ in the region. The AASYC said that this was a violation of the NCA as it prevented the signatory Arakan Liberation Party (ALP) from holding a national level political dialogue, while also preventing the Arakanese people from submitting their voices to the peace process.

Our members also lamented the fact that civil society is only allowed to participate in peace talks through the Civil Society Forum, which is held in parallel to Panglong but limited to discussion on taxes, the environment, and religious affairs. Security and political issues are off the table.

This is despite the fact that CSOs, including the majority of ND-Burma members, are often deeply embedded in conflict-affected communities, providing civilians with humanitarian assistance and essential services. These organizations have both expertise and the trust of their communities. For example, the Palaung Women’s Organization operates a mobile medical clinic for those in remote locations without adequate healthcare, the Tavoyan Women’s Union provides reproductive health training to those who do not have access to it, and the Assistance Association for Political Prisoners (AAPP) provides education to ex-convicts.

“When it comes to adopting the changes agreed in the peace process into the Constitution I believe people may vote no as they will not feel like they have ownership over what has been agreed,” says Mr. Yawnghwe.2 The Tavoyan Women’s Union summarised it as follows: “We fully support the spirit of Panglong, but it will never build lasting peace if it is just negotiations between those who hold guns.”

Indeed, academic research has consistently shown that the inclusion of civil society in peace-making helps achieve peace deals that last. One study showed that CSO involvement in a peace process reduced the risk of a return to violence by up to 64 percent.

“The 2008 Constitution only provides protection to the military. Panglong is our platform for changing that” Tavoyan Women’s Union

Our members unanimously agreed that lasting peace could not be found as long as Burma was under the 2008 Constitution and each organization saw Panglong as a forum in which constitutional amendments would be negotiated. However, members voiced their concerns over the fact that the Government and Tatmadaw were insisting on a finalized peace deal before any changes to the Constitution could be made.

Though previously campaigning for constitutional change and saying that a democratic transition without under the current charter was mere “window-dressing”, the NLD leadership now also insists the country must see national reconciliation before the Constitution is modified.4 The NLD Speaker of the House stated this explicitly last June and Daw Aung San Suu Kyi echoed his remarks during a recent visit to London.

ND-Burma’s members have pointed out that the current Constitution makes no mention of federalism or self-determination for Burma’s states, which results in a lack of trust from ethnic nationalities, who fear discussions at Panglong may be cosmetic. Indeed, the KWAT voiced its concern that the Government was using the Panglong name for political purposes without respecting the spirit of the original agreement, which enshrined “full autonomy in internal administration for the Frontier Areas.”

A recent Government decision to allow ethnic states and regions draft their own constitutions was cautiously welcomed by members, who anticipated that this would enable previously excluded civil society voices to provide valuable input. However, member also criticized the fact that states’ charters were in no way permitted to challenge the 2008 Constitution. The AASYC said: “We are concerned that while Burma is under the 2008 Constitution it will be impossible for states to draft constitutions based on genuine federal principles which guarantee their right to political selfdetermination – including the all-important right to control natural resources.”

Members also highlighted the fact that trust would be impossible as long as the Tatmadaw was guaranteed total autonomy over its affairs, including legal immunity.5 Moon Nay Lin from the KWAT said: “The Tatmadaw has long used the immunity clause in the Constitution to commit grave human rights violations with impunity, with the most systematic abuses occurring in ethnic nationality areas. As long as this clause is not removed from the Constitution, we can have no trust that these violations will not continue.”

“Without justice there can be no peace”

ND-Burma’s members unanimously agreed that lasting peace could not be achieved without all those in positions of power and trust acknowledging and providing redress for systematic human rights abuses. Members highlighted the fact that without recognition of the abuses that have been committed, people had no guarantees that the violations would not recur and trust would be impossible as a result. As any peace agreement reached would serve as the basis for changes to the Constitution, members said that they would continue to push for language relating to recognition and redress in any peace deal.

Our members also argued that institutional reform was key to stitching together a durable peace deal. The Assistance Association for Political Prisoners (AAPP) argued that disarmament, demobilization and reintegration (DDR) on the side of EAOs – what

Burma expert Bertil Lintner has dubbed “unconditional surrender” – had to happen alongside security sector reform (SSR) on the Government’s side.6 Only through institutional reform would it be possible to begin to re-build trust following decades of systematic abuse by security forces in Burma.

Providing victims with redress also makes economic sense: research has shown that implementing post-conflict justice mechanisms can increase the amount of Foreign Direct Investment (FDI) a country receives, as it signals a concrete commitment to peace.7 A recent slowdown in foreign investment in Burma must at least partially be attributed to the re-escalation of conflict in a number of areas and the Government’s refusal to discuss transitional justice.

“We need to be farsighted, courageous enough to take risks in the interest of the generations to come”

In her speech commemorating 70 years since her father’s first attempt at peace, Daw Aung San Suu Kyi said that to succeed, “we need to be farsighted, courageous enough to take risks in the interest of the generations to come.” Acknowledging the horrific abuses that have been perpetrated by all those holding guns in Burma will take great courage indeed, but it is the only way lasting peace can be found.

The Place of Reconciliation in Transitional Justice