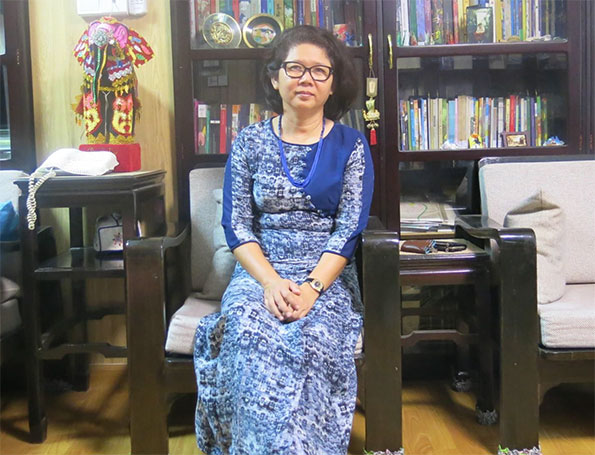 “Without identifying the wound, how can we heal the wound?”

ND-Burma sits down with surgeon, writer, human rights activist and former political prisoner Ma Thida (Sanchaung) to discuss the need for a reconciliation law, why development is not enough to relieve grievances, and how five decades of dictatorship have made everybody into a criminal.

This interview has been edited for clarity. You have talked a lot about the psychological impact mass human rights violations and dictatorship have had on society in terms of fear and called for apologies for former political prisoners. Can you tell us a bit more about that?

What we need is national reconciliation. But in order to get national reconciliation we should not forget about the past. The very first part should be to admit what has happened in the past. To acknowledge where there has been wrongdoing, who is responsible for it, and acknowledging the suffering of people who have been wronged. That’s the most important thing. Without  identifying the wound, how can we heal the wound?

I wish to have a law on reconciliation. The first part should be how we identify what happened in the past, who were the responsible people, who were the victims, how we should acknowledge the suffering, and how we should overcome it. It might not necessarily take action for every single person, but it should be part of the healing process. So only after this we should move to reconciliation. Otherwise it is not logical for me. But my idea is not very popular.

In order to have sustainable peace we will have to have a long process. It cannot be finished by 2020. We have a Myanmar Peace Centre, which is now the National Reconciliation and Peace Center – it just changed its name but the process is the same. So how many peace centres do we need in order to get sustainable peace? Everything depends on the executive: there are some people from the legislature but it’s not legitimate and the process totally depends on the people in power. If we have a [legal] bill we don’t need to worry about the government changing as the law will prevent the people in power from having full authority.

There should be two parts to the process: acknowledging the past and working out how to make the peace process legitimate.

You say if we don’t acknowledge the wound we can’t heal it. Do you think there’s any possibility of sustainable peace without acknowledgement?

I’m not sure. What I believe is simple: not every person can easily forgive and forget. The experiences of these five decades are very varied. Not everybody can overcome their psychological bitterness or grievances easily. For me it’s ok: I have written my prison memoir,  I have overcome this kind of bitterness through Vipassana meditation. So when I’m looking for an apology, it’s not just for me, but we need to acknowledge that some groups of people, for example some ethnic groups, do have collective grievances and this cannot be easily erased by having good infrastructure.

“we need to acknowledge that some groups of people, for example some ethnic groups, do have collective grievances and this cannot be easily erased by having good infrastructure.”

A lot of people confuse transitional justice with development. Would you say this is not enough?

It is not enough. That’s why we need to truly acknowledge, to show our sympathy and empathy for their suffering.

A lot people still have the desire for revenge, which is not naturally released. It is like the safety valve on a pressure cooker, if it is not released it will explode. People have so much anger, so much bitterness, the words they use, the way they behave, everything is overwhelming. For me this shows the hidden psychology, the desire to take revenge. But people cannot take it out on those who are responsible, so they  turn on each other. That is pretty unhealthy. What we’re looking for is healthy peace, not unhealthy peace.

“A lot people still have the desire for revenge, which is not naturally released. It is like the safety valve on a pressure cooker, if it is not released it will explode.”

You said your ideas are not very popular. Can you elaborate on that? Who are they not popular with?

Not just the army, not just the people in power, but the grassroots as well. More or less everybody has had bitter experiences in their own way in this very violent system. Since people have been in pain for so long, they have become numb. They cannot even feel the pain and they think they have overcome it, but they are just numb.

In this transition period, people are overwhelmed by the new political infrastructure. Because of the 50 years of dictatorship people have adapted to the authoritarian behaviour and lifestyle. So that’s why I think people are also still not yet ready to admit their wrongdoing, because throughout five decades of authoritarianism the way the dictators keep everybody silent makes everyone become a criminal. That’s why people don’t want to disclose. So then they just say “the past is the past, let’s forget about it and move forwards.” But psychologically they know what good they’ve done and what bad they’ve done. They still feel the pain but they don’t want to admit. That’s the psychology of every person in my society.

That’s why when I talk about this it’s not just about the dictators. For example in our Constitution, Article 445 defends the dictators of the past, but it’s wanting to protect the psychology of the whole society. That’s why I say “let’s be courageous to say we are in pain.” Or to find out what our pain is. Otherwise we cannot move forward.

“Since people have been in pain for so long, they have become numb. They cannot even feel the pain and they think they have overcome it, but they are just numb.”

Daw Aung San Suu Kyi does not seem to be very interested in any form of acknowledgment or transitional justice. Do you think that’s fair to say?

I’m not sure. The way she conducts talks with the grassroots in Panglong and other places, I think the intention of these kinds of talks is to acknowledge or explore in some way. But it is hard. Even though people now have the chance to express themselves they are not yet accustomed to this kind of culture so they cannot be good speakers, commentators, or participants. We need to train them.

“Even though people now have the chance to express themselves they are not yet accustomed to this kind of culture so they cannot be good speakers, commentators, or participants.”

How do you think the military can be convinced this has to be done and that it is in their interest as well, especially if they want to continue playing some kind of role in Burmese society?

How realistic do you think these proposals are?