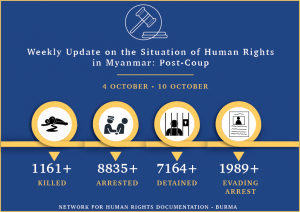 A grave milestone was passed in September – by the end of the month, almost 100 people had been killed by the senseless violence of the Myanmar junta, including a toddler and several seniors. ND-Burma members are risking their lives to document the ongoing human rights abuses which are being carried out by the regime. The Chin Human Rights Organization (CHRO) has provided regular on the ground updates which highlight the urgency of the atrocities taking place. Compounded with an Internet shutdown, civilians are fleeing. Those attempting to return to retrieve belongings from their villages risk being killed in the crossfire. Under the cover of darkness, the junta has proven they are more likely to commit widespread, systematic violence. In Chin State and Magway region, the state-sponsored crackdown is intensifying as the flow of information is being prevented and weaponized.

In addition, the Human Rights Foundation of Monland has observed an increase in arbitrary arrests and abductions, particularly of young people. Targeted violence against women and girls is also on the rise, with the whereabouts of women human rights defenders and journalists unknown. Checkpoints and warrantless raids are exacerbating an already worsening situation. Weak justice systems and a complete lack of trust in the junta has made it harder for locals to have any hope in their well-being.

Despite the mounting evidence and atrocities being committed, the international community continues to be slow to act. There are many lessons to be learned over the decades of support from the civil war in Myanmar, and yet intentional leaders continue to be seemingly mystified by the junta’s lack of willingness to compromise or negotiate. The delay in meaningful consequences has only emboldened the regime to perpetuate human rights violations with impunity. Countries including India and Russia are still providing highly advanced weapons to the junta which are being used to destroy and demoralize civilian livelihoods. Between February and September 2021, 206,000 people were displaced internally due to armed clashes and insecurity.

Victories such as the Burma Bill which was introduced by New York Democratic Party representative Gregory Meeks is part of a greater effort by Myanmar’s civil society organizations which sanctions against those responsible for the attempted coup. The bill notably calls on the UN and the US government to classify the miliary’s persecution of the Rohingya, a genocide. The French Senate also announced a resolution to recognize the National Unity Government as the formal, legitimate government.

The Chin Human Rights Organization (CHRO) documented several cases of ongoing assaults against civilians in Mindat, Thantlang and Hakha, including a civilian who was shot and injured and injured by the junta when he attempted to deliver food to a family member in Thantlang. The majority of residents have fled, though those trying to return to retrieve belongings are being shot at and turned away. The arrests, and deaths of civilians are ongoing as part of the junta’s war on terror.

The Myanmar junta has sent reinforcements to Kachin State as clashes between the Kachin Independence Army intensify. Fearful villagers have abandoned their homes and left to seek safety in monasteries and neighbouring areas. The regime is continuing their senseless violence.

According to the Karenni Human Rights Organization (KHRO), over 200 civilians, including 30 volunteers assisting displaced villagers were arrested by the junta. The youngest detainee is only 15 years old, and the oldest a senior who is over 50 years of age. Aid workers in Kayah State have been targeted for their efforts to support IDPs. Last month, junta soldiers shot at a vehicle attempting to deliver food rations. Fifty homes in Kayah were destroyed during a three-day rampage spree by the junta who shelled and looted civilian properties. An elderly civilian was also killed in his home. Since May, over 130 000 have been displaced in the State.