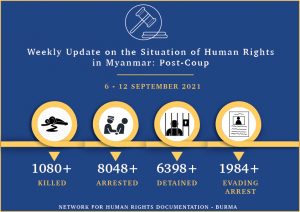 Despite seven months of harrowing violence and state-sponsored atrocities perpetrated with impunity against innocent civilians, the people have not lost sight of their unwavering commitment to dismantle the junta. On Tuesday, 7 September the acting President of the National Unity Government (NUG), Duwa Lashi Li, declared war against the Myanmar armed forces. ‘D-Day’  has been well received by civilians who have been suffering under the military’s rule for months. Even with the anticipated increase in violence and further risks civilians face, it seems the majority agree that “there is nothing worse than life under military rule.” The NUG encouraged people to stock up on food, medicine and to only travel if necessary – in anticipation of increased check points by the military.

In response, Zaw Min Tun, the junta spokesperson accused the NUG of appealing to the international community in anticipation of the 76th session of the UN General Assembly on 14 September. Countries in attendance must decide which authority is the representative of Myanmar in the meetings to come.

The decision by the NUG is significant as it shows defiance not only against the junta, but also to the Association of Southeast Asian Nations (ASEAN) and other international bodies who have failed in their obligations in relation to the human rights situation in Myanmar. Prior to D-Day, the ASEAN Special Envoy had called for a four-month ceasefire to allow for the flow of humanitarian aid – which the junta hastily agreed to. The NUG questioned the ceasefire agreement which was seemingly brokered between the junta – without any consultation of the NUG or the Committee Representing Pyidaungsu Hluttaw (CRPH). The Myanmar Army has a history of regularly violating ceasefire agreements.

Fighting has already intensified in urban and rural areas against the junta’s military forces. In Yangon, as pharmacies and shops flooded with customers ‘panic buying’ military jets flew over the city and soldiers took defensive positions in several shopping malls.

Several ethnic armed organizations (EAOs) and People’s Defence Forces (PDF) expressed their commitment to the nationwide offensive against the junta including the Chin Defense Forces, the Kachin Independence Army and the Karen National Union. The Mandalay Student Union also expressed enthusiastic support of the uprising by vowing to be at the forefront of the fight against the junta.

The Myanmar junta has killed over 100 civilians in Chin State since the coup including 14 children and seven women. The regime has also refused to return the bodies of at least seven to grieving families. The Chin National Organization has been documenting human rights and has called on the UN to take action for crimes against humanity. Religious buildings continue to be destroyed by the junta across the country. Junta troops looted and destroyed a church and a Buddhist monastery in Mindat Township.

Since the NUG declared war on the junta, Chin defense forces have warned their communities against the onslaught of increasing violence.

Karenni State has been plagued by mounting state-wide violence. According to the Progressive Karenni People Force (PKPF), there have been sixty-clashes between the junta and Karenni resistance groups since the coup. This has resulted in 83 civilian casualties which includes members of the People’s Defense Forces, and IDPs. PKPF adds that 120 others have been abducted and over 120 000 internally displaced.

Four junta soldiers were killed in an ambush by the Karenni Army (KA) and Karenni Nationalities Defence Force (KNDF) in Demawso Township on 7 September. Reports are once again circulating of an increase in violence anticipated since D-Day was declared.

In Pekon Township, southern Shan State, a couple was forced by the junta to walk in front of the regime and guide them. They were used as human shields to protect themselves in any ambush by People’s Defense Forces. This is becoming a more common occurrence as civilians are trapped in the crossfire and left without any choice but to obey the soldiers commands.

On 1 September, the Myanmar junta launched an offensive against the Pekon People’s Defence Force and the Karenni Nationalities Defence Force.