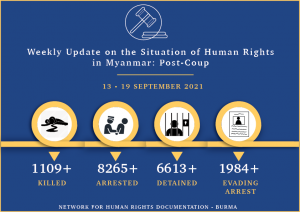 Pressure remains on the United Nations as members meet at the UN General Assembly (UNGA) to discuss among other things – who will be Myanmar’s permanent representative. Civil society organizations have issued statements calling on the UN to recognize and support Ambassador U Kyaw Moe Tun as Myanmar’s Permanent Representative at the UN General Assembly. To recognize the murderous regime that is the Myanmar Army would be a grave insult to the people of Myanmar – in particular the thousands of families who have loved ones in prison for exercising their rights to peaceful protest. In seven months, the junta has waged war on civilians in the country who have overwhelmingly rejected the military’s politics and justification of their attempted coup. The UNGA has previously adopted resolutions which condemned the military’s abhorrent use of violence against unarmed people. In addition, the UN Security has expressed concern over the increasingly volatile situation. Further, to recognize the junta in the midst of past criticism and calls for democracy to be restored would seriously call into question the concerns the UN has for the civilians in Myanmar. The human rights situation in the country has quickly become a nightmare for every day civilians who are quite literally fearing for their lives.

Among the many declining freedoms amid the junta’s sprawling censorship is that of expression and association. Amid ongoing rising tensions between the Myanmar Tatmadaw and the armed defence forces which have emerged in light of the coup, Internet shutdowns have become a tool for the junta to violate human rights.  The blackouts in various parts of the country have set off alarms, particularly for communities living in conflict zones. Internet in Hpakant, Kachin State has been inaccessible since August and recently mobile Internet and some forms of Wi-Fi has been cut off in townships of Sagaing Region and Mandalay. Since the coup, the junta has illegally amended state laws which protect civilian privacy. The shutdowns have made local people more fearful. There is a reliance on technology and shared communications to relay warnings of oncoming attacks. Civilians have a right to live freely and safely, which includes being able to access information.

Fighting between resistance armed groups and the Myanmar junta has continued to take casualties from both sides. With combined forces of the Chin National Army and the Chin Defence Force, a Tatmadaw outpost was taken over in Thantlang township which killed 12 Myanmar soldiers. Chin State has been one of the hardest hit since the coup. A new briefing paper by the Chin Human Rights Organisation called the situation in Chin State a ‘humanitarian crisis.’ The fighting has forced over 1000 civilians in recent days to the Myanmar-India border.

On 18 September, at least one civilian was killed and over a dozen homes burned in Thantlang as the junta shelled villages.

For civilians in Kachin State, offensives between Kachin armed groups and the Tatmadaw can come at any moment. In recent weeks, villagers have been killed for simply walking past regime bases and being targeted by the junta. Since August, the military has cut Internet access in Hpakant as offensives increase as violence becomes increasingly more volatile. A young woman in Tanai township was shot in the head during a battle with the Kachin Independence Army and the junta. She was running to her car to escape when she was struck.

Magway Region has been hit particularly hard with violence. As the armed resistance movement grows, the Tatmadaw too has increased their operations to silence and suppress anyone who they deem a threat. At least 18 unarmed civilians were violently tortured and killed in Gangaw Township. An 80-year old man was among those who was killed with a shot to the head and his arms tied behind his back. Those who attempted to fight back and defend their village were young and ill-equipped with weapons that matched the juntas. Twenty-seven homes were also deliberately set on fire by the regime in a Magway village. At least 70 soldiers and 20 local civilians and PDF members were killed in recent attacks in Saw, Magway Region.

Update on the Situation of Human Rights in Myanmar Statement by Michelle Bachelet,...
Scroll to top