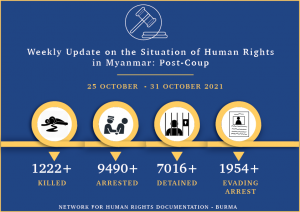 Human Rights Watch and the Associated Press released detailed reports of the torture innocent civilians in Myanmar have been subjected to. While these tactics are not new, the junta’s lawlessness is in full swing leading the joint secretary of the Assistance Association for Political Prisoners, Ko Bo Kyi to state that in many ways, the military has become ‘even more brutal.’ Torture tactics include mock executions, beatings, and electrocution. Women are targeted with physiological warfare and sexual violence and assault. A transgender activist and writer who was detained by the junta was forced to endure humiliation tactics and was sexually harassed and beaten with gun stocks. Hot water was poured all over her body.

These accounts from survivors are a terrifying glimpse into the horrors that exist within the walls of the junta’s interrogation centers. They also demand action. Many did not leave the walls of the prison they were confined to. They are tortured to death, and their families denied answers and the bodies of their loved ones.

While the Association of Southeast Asian Nations (ASEAN) opened a three day summit without the presence of the junta, civil society organizations have urged ASEAN to take the next logical step – which is recognizing the National Unity Government as the legitimate governing body. Despite barring the junta from attending, ASEAN has still nonetheless met with coup leaders and sided with them at times of contention. Bo Hla Tint, who has been designated the NUG ambassador to ASEAN, has said that he is willing and open to have a dialogue to ‘restore democracy in Myanmar.’

The junta’s lack of cooperation and flagrant disregard for human rights continues to set a worrying precedent. In outgoing remarks, the former UN special envoy, Christine Schraner Burgener, said that she hoped that the international community would not give up on Myanmar as the country spirals deeper into civil war. The junta had barred her from entry despite several attempts for dialogue and access to the country. Stepping into the role is Noeleen Heyzer who has experience working in Myanmar including coordinating the emergency response to Hurricane Nargis in 2010. Many challenges lie ahead but she has been welcomed by civil society and the NUG who are eager to work alongside her to dismantle the regime and their state-sponsored brutality.
CHIN STATE

Since September, the terrorist junta has scorched over sixty homes in Chin State as military operations continue to expand. In addition to burning villages, livestock have been killed and possessions looted from civilian homes. The Myanmar military has denied all accounts of arson and theft, claiming instead that it is the people who burnt down their own homes. The Chin Human Rights Organization has stated on multiple occasions that the regime’s crimes are all in violation of international law, including setting fire to at least 300 homes in the State since August.

Meanwhile, the crackdown in Chin State continues to intensify. With more than 90% of the population Christian, the regime has burned down churches and fired artillery shells to traumatize the population.  As fighting broke out in Falam between the Chin National Front and the junta, villagers began to flee in anticipation of worsening outbreaks. On 29 October, as of 7:00 pm. over 100 houses, including religious buildings are reported to have burned down in Thantlang. CHRO reiterated its calls to the UN Security Council to convene an emergency meeting as junta reinforcements arrived in Falam.

Earlier this month it was reported that Myanmar army officers and soldiers located near the Salween river looted a cargo vessel carrying urgently needed materials for vulnerable populations in Karen State. Soldiers were also heard indiscriminately firing. Meanwhile, offensives are continuing against Karen civilians who are fearful of the increasing presence of soldiers in their areas.
The Myanmar junta continues to use Karen villagers as human shields, threatening to torch their homes if they attempt to flee. In Yaw Thit Village, approximately 60 soldiers from LIB 556 and 560 have established a base. The junta is also stealing civilian livestock to eat and shooting indiscriminately all day and night. Given the circumstances unfolding along the Thai-Myanmar border, the National Unity Government has appealed to Thailand for cross-border humanitarian aid and COVID-19 relief.

The junta’s assaults on fundamental freedoms continue with violent attacks on innocent civilians. A woman in Pangsai was seriously wounded when she was struck by a piece of shrapnel while conflict waged in northern Shan State. She is in critical condition. Rival armed groups are regularly fighting each other and the Myanmar junta. Two civilians in Kyaukme township were also injured when fighting broke out and artillery mortars struck a 60 year old man and his 18 year old grandson. In an attempt to forge legitimacy, the junta has forced civilians to attend pro-military rallies in eastern Shan State.