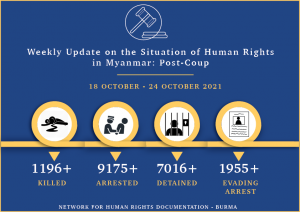 On October 18th and 19th, the Myanmar military junta announced they would release over 5000 political prisoners who had been detained since the attempted coup. The decision to do so was highly politicized as it came during the traditional Thadingyut festival in Myanmar, and by no coincidence, shortly after the Association of Southeast Asian Nations (ASEAN) declined to extend an invitation to the military junta to upcoming summits later this month. The junta has completely and utterly failed in their responsibility to protect the civilian population. Despite the ‘Five-Point Consensus’ which the junta had agreed to fulfill, in fact, none of their commitments have been followed through. As stated by the United Nations Special Rapporteur, Tom Andrews, the junta is seeking funds, weapons and legitimacy from the international community. Their inability to overwhelmingly secure their demands speaks to their lack of credibility, which the Myanmar Generals so desperately crave.

In what proved to be further evidence of the junta turning its back on their promises, shortly after political prisoners were released, reports emerged that dozens were rearrested. According to the Assistance Association of Political Prisoners (AAPP), 110 political prisoners were re-arrested soon after release since the 18 October announcement. Just a few months ago in June, the regime claimed they released over 2000 prisoners, when in reality, less than 400 were verified by AAPP. The military has also not provided any lists of those who were freed. It is imperative that governments around the world do not take the junta’s amnesty as a sign that they have changed their tactics. Quite the contrary, these are the same patterns the regime has deployed for decades. It is crucial that the international community not be fooled and continue to put pressure on the regime to return power to the democratically elected government.

The attempted coup has not brought the ease and comfort of transitioning into authoritarianism that the Generals anticipated. Instead, the people have largely refused to be silent and are continuing to protest as well as amplify calls to the international community for targeted sanctions, and a global arms embargo. Burma Campaign – UK called on the UN Security Council to urgently hold a meeting as the human rights situation looks to worsen due to the junta’s increasing military operations in Chin State, Sagaing Region and Magwe, North-Western Burma. The National Unity Government has said that foreign non-state armed groups have been ‘settling’ into the state and are being supported by the junta to try and dismantle, and weaken civilian-led defense forces.

According to the United Nations Office for the Coordination of Humanitarian Affairs, over 20 000 civilians have been forcibly displaced in Chin State alone, due to ongoing clashes between the junta and armed civilian defense groups. Attempts to deliver aid have been challenging as local and international groups have experienced brutal push-backs from the regime, hampering their attempts. Travel and security concerns are discouraging locals from making the effort. Several displaced populations who attempted to return to retrieve food and materials from their villages in recent weeks have been targeted by the regime. Some have been killed, or just barely managed to escape.

Worries have grown that the civilian impact of the offensives will worsen as the Tatmadaw’s highly equipped artillery threatens the safety of residents.

Several Myitkyina based journalists were released from prison where they were unjustly being detained by the junta. They were arrested for covering the peaceful protests by civilians earlier this year. According to Kachin News, Myitkyina News Journal reporters Aje and Christopher, were arrested on 13 April, and Myo Myat Pan, who was arrested on 14 April. Chan Bu of The 74 Media and La Raw of Kachin Waves, were both arrested on 29 March. The junta is still actively engaging in brutal warfare in Kachin State, including artillery shelling and indiscriminate firing.

COVID-19 is continuing to spread quickly and have devastating impacts on the population. In Hpruso Township, 100 people have tested positive for the disease. The pandemic has crippled the livelihoods of those already struggling to survive amid increased fighting between the junta and civilian defense forces. In Hpurso Township alone, over 4000 people have been displaced. Throughout the State, over 85 000 are internally displaced. Doctors from the Medics from Karenni Nationalities Defence Force are attempting to treat displaced, sick villagers in the region.

AAPP statement on the ruthless arrest of 88 student leader, Ko Jimmy aka Kyaw...