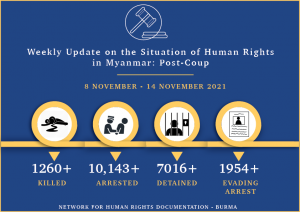 The Myanmar military is using innocent civilians as political tools in order to make themselves appear more legitimate. Over the last week, a series of high-profile National League for Democracy (NLD) leaders have either been arrested, or sentenced to long sentences in an attempt to weaken party morale.

Detained veteran student activist, U Kyaw Min Yu (Ko Jimmy), a member of the 88 Generation Students Group was arrested at the end of October where he later suffered a violent interrogation in military custody. He was then charged with high treason and terrorism. The five charges he faces could see him face 30 years in prison if convicted, with the possibility of the death penalty.

Former NLD Chief Minister, Nang Khin Htwe Mying, 67 was found guilty on five separate charges in a military court. She was handed a maximum of 15 years for each case – which brought the total to 77 years in prison.

U Win Htein, who has been sentenced to two decades in prison for sedition by the junta, is an 80 year old patron of the NLD in declining health who was transferred  from a Naypyitaw detention centre to Obo Prison in Mandalay.

As more charges are laid, ousted politicians are still being detained and family members taken hostage in their place. Win Myint Hlaing, 51, who represented Taungdwingyi Township in Magway’s regional legislature was taken away with his brother on 8 November and has not been heard from since.

Meanwhile, since the attempted coup, the junta has continued to crackdown on former government officials who have rejected the regime and remained loyal to the NLD. Over the last 90 days, the military has seized approximately 70 properties of NLD lawmakers and other party members who have joined the National Unity Government or People’s Defense Forces.

Despite all the efforts to weaken the resistance movement and Spring Revolution, efforts to dismantle the junta have not wavered. The arrests and targeted assaults on the people’s freedoms are only signifying the fragility of the junta and their desperate attempts to eliminate competition to appear stronger. People continue to overwhelmingly reject everything that the military stands for.

Satellite imagery showed the devastation and destruction perpetrated by the military junta in Chin State where homes and churches were burnt to the ground. The regime continues to deny their involvement but photos and testimonies from survivors speak the truth.

As resistance forces continued to fight to defend their territory, the Chinland Defense Force (CDF) in Mindat township stated that over a week and a half, a Myanmar military convoy was repeatedly attacked and nearly 60 soldiers were killed.

The wave of atrocity crimes in Chin State has led to challenges documenting evidence of the war-path left behind by the Myanmar junta. An ongoing internet shutdown has made it even harder. Organizations are taking huge risks to attempt to collect critical documentation.

Communities in Kachin State are reeling from the aftermath of targeted airstrikes by the military junta. Livelihoods have been forcibly put on hold as the regime’s presence evokes fear and uncertainty. Since March, multiple airstrikes have displaced thousands. Many displaced villagers have left the IDP camps and returned home, fearing that they would contract the COVID-19 virus in close quarters. Yet many of their needs remain unmet as conflict and the pandemic, as well as inflation, has put basic items out of financial reach for local people.

Shan State is among the many areas which continues to be faced with the brutality of the  junta as ongoing offensives threaten their survival. In the last two days, scorched earth tactics forced nearly 40 000 residents in Shan State and Sagaing region. In Pekon township, southern Shan State there were 10 000 people from 20 villages seeking refuge.

Villagers also reported the rape of a local elderly woman in northern Shan State after soldiers stole food from her home. The 62-year old was in her home with another woman when three soldiers approached her home. After one left to feed the livestock, the soldiers returned and raped the woman.