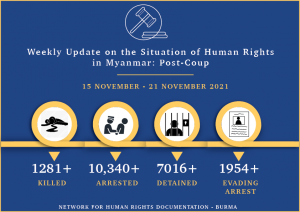 After nearly six months in detention, detained US journalist Danny Fenster was released by the military junta through the help of negotiations between former US Diplomat, Bill Richardson under terms which remain undisclosed. Days before, on 12 November the same authorities who deported him, also sentenced Danny to 11 years in prison on violations of immigration and unlawful associations laws. The severity of the sentencing was called ‘baseless,’ ‘unjust,’  and ‘the harshest possible under the law,’ by Danny’s employer, Frontier Myanmar. His release comes after months of trials within the prison and endless calls for all journalists and political prisoners to be freed – none of whom should have ever been imprisoned to begin with.

Danny was taken away by security forces on 24 May while waiting to board a flight home when he was arrested based on false allegations that was working for Myanmar media outlet, Myanmar Now. His detainment and subsequent release highlights the injustices that the military junta has taken to suppress free speech and press freedom. Since his release, Danny has said he is committed to highlighting the plight of the dozens of remaining journalists behind bars and pledged to advocate for their freedom. They too are facing outlandish charges and face the possibility of long jail sentences.

While news of his release was overwhelmingly welcomed, it is nonetheless critical that Burmese press, human rights activists and civilians who have been unjustly imprisoned are also granted amnesties and negotiations on their behalf to ensure their freedom is granted.

The junta has taken significant steps to have a stronghold on media outlets across Myanmar as it attempts to eliminate an environment of the free press altogether.  Since February, the media has been warned to not call the attempted coup as such. Journalists were arrested while documenting peaceful protests, which forced dozens into hiding. Many still remain on the wanted lists of the junta, and their families are targeted by being taken hostage. The worrying situation and declining media landscape has been compared globally as among the worst in the world.

It is with the utmost urgency that the stronghold on the press in Myanmar is relinquished and that all efforts are made to ensure the freedom of journalists unjustly behind bars. As a hallmark to any democratic society, free press is a guiding principle which the junta has outright discouraged and actively disbanded. The path the junta has taken is on a dangerous course which must be reversed, or further risk a deterioration of media values and even more dangerous space for journalists. It is therefore imperative that the country be under civilian control to restore the dignity and integrity of muted professions by the Myanmar military.

The military junta has been accused of raping two women in Chin State while raiding a village in Tedim township. A 27-year old victim was raped in front of her husband who was held at gunpoint, according to residents. She had only recently had a baby. Later that night, the woman’s pregnant sister in law was also raped. Thin Yu Mon, the director of the Chin Human Rights Organization, called the incident “disgusting and extremely inhumane.”

Offensives by the military junta and increased presence of soldiers are dangerous for civilians. Yanghee Lee of the Special Advisory Council for Myanmar and former United Nations Special Rapporteur on the situation of human rights in Myanmar stated: “Junta forces in Chin State have plundered rice stocks, destroyed farms and killed livestock in an attempt to starve the local population. Across northwest Myanmar people are in urgent need of food and medical aid.”

An escalation in fighting in Karen State has local civilians worried for their safety. According to the Karen National Union (KNU), since the beginning of November, 32 Myanmar junta soldiers were killed, and 56 wounded in clashes. The KNU has stated that the increase in fighting is due to the ongoing expanding military operations of the military junta who are taking advantage of the coming dry season to transport their supply of food and ammunition.

The military junta set fire to more than three dozen homes in a village in Pekon Township, southern Shan State. Officers from the Karenni Nationalities Defense Force noted that many homes were torched intentionally by the regime. Following the destruction of properties, local villagers fled once the regime set up their base in the area. In addition to homes, a church was also damaged by shelling.

A new flash report, “Access Denied,” released by Fortify Rights analyzed the atrocities being committed against innocent civilians by the junta in Kayah State, including the blocking of life-saving aid. According to accounts in the report, human rights violations have been escalating including torture, raids and scorching of villages. Aid workers had also been targeted as arbitrary arrests continued.