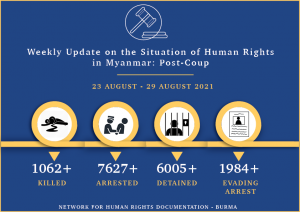 In the seven months which have passed since the junta seized power in an attempted and unlawful coup, the situation of human rights has continued to decline. Activists and journalists have been oppressed through violent tactics and arbitrary arrest. With over 1000 civilians killed by the junta’s murderous crackdowns, the military indeed has blood on their hands. Despite the harrowing number of civilian lives lost in conflict and while participating in anti-coup activities, the Myanmar junta has plans to deploy even more troops to ethnic areas including Karen, Kachin and Kayah States. The fighting will have devastating impacts on displaced communities who have already been forced to flee from their homelands routinely. According to the most recent humanitarian snapshot by the United Nations High Commissioner for Refugees, there are 189,000 internally displaced persons (IDPs) in Myanmar as of 16 August, due to armed conflict and unrest since the coup.

Amid the turmoil which continues to embody the state’s social and political space, the junta maintains their unjust rule is legal. Leaders of the National League for Democracy, including State Counsellor, Aung San Suu Kyi, remain in custody of the junta and are being denied access to their lawyers, with countless court dates postponed. Meanwhile, the same old tactics are ongoing when for example, a raid by the junta in Yangon resulted in over 30 young people being detained.

In a concerted effort by civil society to show solidarity in marking the four year anniversary of the Rohingya Genocide Remembrance Day, 43 Myanmar organizations expressed their commitment to urging the full restoration of Rohingya rights. Pressure must remain on the international community to pursue legal courses of action against the junta through various international referral pathways. ND-Burma Coordinator, Ko Han Gyi, remarked: “The genocide committed against the Rohingya four years ago is consistent with the systemic and brutal violence that is a hallmark of the Myanmar military. The National Unity Government acknowledged the crimes against the Rohingya by using a statement expressing sadness at the ‘horrendous violence, gross human rights violations and massive displacement that the Rohingya people have suffered…’

Though the violence appears to be never-ending, Myanmar soldiers are defecting. At least 2000 soldiers and police have joined the Civil Disobedience Movement and related Spring Revolution activities. Police in Kayah State have also moved to strike with hundreds of officers. The Karenni State Police has over 300 who’ve defected from the junta’s Ministry of Home Affairs, with a spokesperson remarking: “As a long term vision, we aim to make it a model police force for others in the country.”

KACHIN STATE
The Internet has been cut off in Hpakant Township, Kachin State by the Myanmar junta. The blocking of online services was met with confusion from locals who weren’t sure why it was shut off, or when it would resume. Civilians suspected that it was a sign of increasing military operations to come as an increased presence of soldiers has sparked fears in Kachin communities.

KAYAH STATE
According to the Karenni Civil Society Network (KCSN), there are 120,449 internally displaced persons who have been impacted by the attacks by the Myanmar junta and the Karenni Army. Within that number, half (55,265) are in Demawso Township. Fighting between the Tatmadaw and the Karenni Nationalities Defence Force specifically has displaced nearly 70% of Demawso’s 80,000 residents.

The KCSN Assistant Coordinator remarked: “As the Burma Army continues to conduct military operations in Karenni State, IDPs face many hardships. Some have to keep moving from place to place to escape the offensives.”

Fighting is spreading to various brigades controlled by the Karen National Liberation Army. A senior officer remarked that coup leaders are responding to a series of successful attacks by the People’s Defense Forces. The set retaliations by the junta will attempt to ‘wipeout’ PDFs in 6th and 7th Brigades. Calls for humanitarian aid in civilian areas are being amplified as military operations expect to displace more civilians.

MYANMAR CSOS CALL FOR THE FULL RESTORATION OF ROHINGYA’S RIGHTS AND AN END...