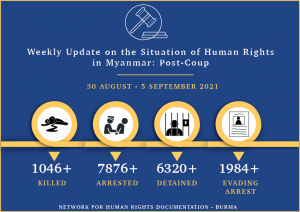 Myanmar junta soldiers are steadily abandoning their posts with the regime and choosing to stand with the people alongside the Spring Revolution. Approximately 2000 soldiers have defected since the coup with the highest ranked defector being an army colonel. The National Unity Government (NUG) has offered to provide protection for junta defectors. Many of those who are leaving the Tatmadaw say that they are ‘ashamed’ to have been affiliated with the murderous regime. While the number is seemingly low considering the size of the Tatmadaw, it is significant because this is a new precedent in the country’s armed struggle.

Freedom of expression and subsequent attacks on the press continue to dilute the environment of free speech in Myanmar. Journalists like Danny Fenster, the managing editor at Frontier Myanmar, have been unlawfully detained without reason for over 100 days. His family has appealed for his release and the many other political prisoners who remain in junta custody. Since the coup, laws have been amended by the military to attempt to justify their attacks on the press. Among these include the Penal Code which has been used against journalists. One-hundred journalists have been arrested, with 46 in prison who are subject to harassment, torture, severe beatings and psychological warfare. In ethnic areas, the impacts of censorship are being felt as Hpakant township in Kachin State surpasses two weeks since the Internet shutdown.

South Korea voiced its support for democracy in Myanmar and openly rejected the junta and endorsed the National Unity Government. South Korean officials also called for an end to the military’s human rights violations and unlawful arrests. Meanwhile, the National League for Democracy continues to face outlandish charges by the junta. Senior officials who have been detained, including ousted State Counselor and regional state officials. If found guilty, they could face up to 15 years in prison. Families have called the situation ‘unbelievable’ as deaths, arrests and raids by the junta are ongoing.

Civilian assaults are ongoing where Sagaing region in particular is targeted with mounting violence, intimidation and threats by the junta. Thousands of residents from ten villages in Tanze, Sagaing fled following an invasion by the military. Property was destroyed and several were arrested in their clearance operations. Since the raid, four civilians have been killed, three disappeared and 12 arrested in Tanze Township. In a separate incident in Mon State, a 27 year old pregnant woman was shot and killed while returning home with her husband who was fishing. The firing was seemingly indiscriminate and indicative of the impunity deeply entrenched in the Myanmar junta.

Religious monuments and places of worship outside the Buddhist faith are being targeted in Chin State where 95% of the population is Christian. Churches continue to be violently destroyed and looted, including hymn books and scriptures. During raids in Chin State over the last week, the junta stole valuables, destroyed homes and looted valuables in Mindat and Falam townships in Chin State. According to local residents, 50 of the 55 homes in Wa Kauk village were raided.

The Myanmar junta has sent in more reinforcements to Karen State, which has put civilian livelihoods at risk as clashes fuel further uncertainty. Following the increase in troops, weapons and supplies, security forces clashed with the Karen National Union. The combined threat of fighting with Karen armed groups, the junta and Border Guard Force has forced residents to run to find safety, though the fears they face are a looming threat over their security. A villager who had escaped three times said: “What else can we do? We are afraid of being caught in the shooting.”

Military casualties and hundreds of civilians have been forced to flee Lashio in northern Shan State. Clashes have been intensifying in the region since the end of August. More than 800 civilians are sheltering in Mongko Township, with at least 17 junta troops killed in the crossfire. A local source remarked that the military fires heavy artillery, and the local civilians don’t see it coming. Four civilians were killed during the heavy exchange of gunfire, and a Ta’ang village was burnt down.

In addition seventeen Myanmar Army soldiers were found in Muse District in an abandoned area. Two women were also found, deceased and with evidence of gunshot wounds.