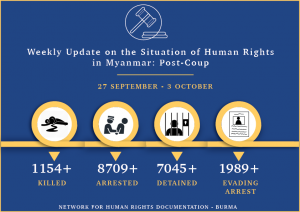 Eight months have now passed since the attempted coup in Myanmar. Every day, the country plunges deeper and deeper to a point of no-return. The value of the local currency is at an all-time low and internet shutdowns in 25 townships have stifled the already deteriorating human rights situation. Against the backdrop of darkness, the junta is more emboldened to commit grave violations. The junta has cut off internet access in several townships in northwestern Myanmar including Gangaw, Htilin and Myaing in Magway Region, and Falam, Kanpetlet, Matupi, Mindat, Paletwa, Tedim, Thantlang and Tonzang in Chin State.

Chin State, Kayah State and Sagaing region have been primary targets for the Tatmadaw as emerging civilian defense forces show no signs of abating. In several cases documented by ND-Burma affiliate member the Chin Human Rights Organization, two senior civilians were killed by the junta when their car came under attack by the regime while trying to retrieve their possessions after fleeing. Another was found dead, with a bullet wound to his head.

The National Unity Government (NUG) has called for a ‘defensive war’ against the illegal junta. The NUG made the announcement earlier in September following months of a brutal onslaught of violence perpetrated by the regime in an attempt to squander dissent. A devastating projection by the UN Food Program says Myanmar is on-track for ‘extreme deprivation’ with 1.2 million jobs lost since the coup.

An ongoing displacement crisis in Myanmar is a contributing factor to the grave sense of loss civilians are reeling from. Over 200 000 people fled their homes in the first six months of 2021. Since February, an estimated 2 million have been impacted by the crisis and are in urgent need of humanitarian assistance including food, shelter and medicine. The surge in COVID-19 cases and a deepening distrust has done little to curb fears and anxieties.

If one thing is abundantly clear in the time that has passed, it is that the junta has failed in their unjust attempt to seek legitimacy. Citizens reject the powers of the regime who only know how to rule through force. The international community and United Nations has a responsibility and moral obligation to declare the junta what it is – an unlawful, terrorist organization.

The ongoing violence in Chin State has forced thousands to neighbouring borders to seek safety. Those who remain face the prospects of arrest, torture and death if confronted by the junta. After fighting broke out in Thantlang following an ambush by the Chinland Defence Forces, casualties had not been confirmed. Civilians in the region said gunfire could be heard for approximately 30 minutes. After the ambush, the junta responded by open firing on the town where 18 homes were destroyed. A pastor was killed and nearly all the residents fled.

The bodies of several civilians found in Kanpetlet of Chin State were discovered with bullet wounds. Two of the bodies were burned and thrown into a ditch. The Internet shutdown in much of the State has made it more plausible for the junta to evade responsibility for their crimes.

The junta is also continuing to violate civilian rights by laying landmines in civilian areas of Kayah State. As a result, innocent villagers are being severely injured and killed while traveling in town. The Karenni Nationalities Defense Force has defused approximately 30 junta-planted landmines and unexploded artillery shells.

Intensified fighting in Kayah State led to two civilians being killed during clashes in Demawso Township. Soldiers have been setting fire to villager homes and ransacking their belongings. Around 200 soldiers continue to occupy the area.

Clashes between rival Shan armed groups and between the junta and People’s Defence Forces has resulted in civilians being killed in the crossfire and forcing them to flee. Indiscriminate firing and shelling in northern Shan state left one nine year old boy dead after his home was struck in Monekoe Township. Another woman was hit with shrapnel in the head and was recovering with serious injuries.Fifteen vehicles with junta reinforcements arrived two weeks ago in Monekoe. Shan armed groups have rejected calls for a ceasefire due to ongoing disputes over land and territory.
Download PDF
https://nd-burma.org/wp-content/uploads/2021/06/hr-st-up.jpg 441 1500 ND Burma https://nd-burma.org/wp-content/uploads/2020/04/ndbLogo-296x300.png ND Burma2021-10-04 09:53:352021-10-05 09:59:42Weekly Update on the Situation of Human Rights in Myanmar: Post-Coup (27 September to -3 October 2021)