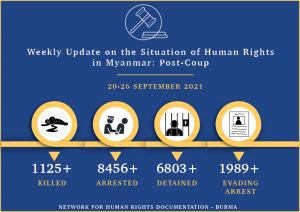 Increasing attacks on civilians have devastated communities across Myanmar. The International Day of Peace which was marked on 21 September included sentiments calling for an end to war from various human rights groups. The Karen Women’s Organization wrote on their Facebook page: “Peace is when everyone including women, men and children can live happily. It means having access to opportunities to improve themselves and their communities without facing threats to their safety and security.” The Karen Human Rights Group noted  the violence being used against civilians in Karen State which include “airstrikes and ground attacks that are indiscriminate in nature.” Every day since the coup, violence has continued to force destruction upon innocent civilians. Buildings of worship have been burned to the ground. Buddhist monks supporting the pro-democracy movement have been killed in their temples. Families have been torn apart and forced to flee at a moment’s notice.

Relief workers are putting their lives on the line as they risk their safety delivering aid to vulnerable populations in need. The junta opened fire on a vehicle carrying food and medicine for IDPs in Demawso, Kayah State. Raids are also ongoing, as informers leak information on the status of civilian’s whereabouts. In Yangon, warrantless raids remain frequent, where at least 35 people were arrested and one killed by junta security forces over the course of a week. The regime is responding to the growing guerilla attacks across urban and rural areas, and attempting to violently crack down on dissent.

The disregard for human life is growing stronger each day, and yet the international community remains too slow to act. The junta has proven that they are ill equipped to protect the people of Myanmar and safeguard their rights and freedoms.In an address to the Human Rights Council, Michelle Bachelet, UN High Commissioner for Human Rights said “accountability remains crucial to any solution going forward.” Last week, the Myanmar kyat fell to a record low, marking yet another sign of how life under the junta is disrupting the social and economic fabric of the country. In addition, freedom of expression continues to dwindle under the junta’s unjust seizure of power where according to Freedom on the Net 2021 – Myanmar fell by 14 points on internet freedom. This is the steepest decline in one year. And when help from the United Nations was offered for greater humanitarian access in the country, specifically to expand the response to COVID-19, the junta appointed health minister rejected assistance. Civilians refuse to allow the coup succeed, including by boycotting bills to the junta. According to the National Unity Government, over 97 per cent of customers in Yangon and Mandalay have not made their payments. Nationwide, 80% of citizens are doing the same. Their refusal to be governed by a notoriously brutal regime once again highlights the spirit and resistance of Myanmar people.

Chin State remains embroiled in a deadly conflict, forcefully waged upon them by the illegal junta. In the State capital city, Hakha, civilians say there has been ‘shooting and bombings’ every day since the beginning of the month. The junta has been scorching villages and indiscriminately firing. Over one thousand Thantlang residents have fled to the Myanmar-India border to seek shelter as they fear violent confrontation from the junta.

A Christian pastor was among those shot and killed during intensified clashes of Chin defense forces against the Myanmar Army in Thantlang. He was killed while trying to put out fires that the junta had intentionally sent ablaze. The junta also cut off his finger to steal his wedding ring, and looted his belongings. The Internet has also been shut off by the junta in major areas of Chin State.

Civilians are fearful of the growing presence of the Myanmar junta in their areas as over 200 soldiers and more than 40 military vehicles arrived in Mongkoe, Kachin State. Villagers in the State are among the over 3 million in need of urgent humanitarian assistance.

Junta commander in Chief, Senior General Min Aung Hlaing was met with protests by dozens of youth when he traveled to Myitkyina, Kachin State who were against a visit by a dictator with no regard for Kachin civilians or their environment. Parts of Kachin State are among the five states and 22 townships of the country where the Internet is not accessible.

For those sheltering in Demawso, Kayah State, junta artillery shells reportedly ‘fell like rain’ which forced resistance groups to withdraw in their offensives against the junta. Fighting lasted four hours and led to injuries and a death from the Kayah defence forces.​The situation for internally displaced persons in Kayah State is worsening as the number of IDPs and positive COVID-19 cases grows. Those delivering aid are risking their lives to do so as the junta seeks to target aid workers responding to the crisis. It was reported this week that 40 IDPs in Kayah State were infected with COVID-19 from Myanmar junta soldiers.
Download PDF
https://nd-burma.org/wp-content/uploads/2021/06/hr-st-up.jpg 441 1500 ND Burma https://nd-burma.org/wp-content/uploads/2020/04/ndbLogo-296x300.png ND Burma2021-09-27 09:37:552021-09-28 09:43:35Weekly Update on the Situation of Human Rights in Myanmar: Post-Coup (20-26 September 2021)