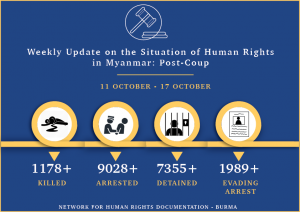 The decades of lies, denials and fabrications of the truth are catching up with the Myanmar junta. What the people on the ground have known and vocalized to the international community is being amplified in all diplomatic chambers.

On October 15th,  Southeast Asian foreign ministers met for an emergency meeting on potentially barring junta-military chief, Senior General Min Aung Hlaing for failing to adhere to commitments made to the Association of Southeast Asian Nations (ASEAN) bloc at a summit meeting in Jakarta on 24 April earlier this year. Myanmar civil society organizations have called for the junta to not be invited to the ASEAN Summit on 25 to 28 October because of the regime’s proven unwillingness to cooperate with domestic, regional and international accountability mechanisms intended to curb and end the indiscriminate violence which Myanmar is engulfed in.

To ASEAN’s credit, at the meeting, member countries decided not to invite the military junta, and opted to instead invite a ‘non-political representative’ from Myanmar. The decision emerged to ‘uphold ASEAN’s credibility,’ despite longstanding criticisms that ASEAN’s policy of ‘non-interference’ failed to hold the junta accountable. In response, the Myanmar Ministry of Foreign Affairs attempted to defend their commitment to the Five-Point Consensus by outlandishly declaring that they were working to preserve ‘peace and tranquility,’ and ultimately accusing ASEAN of not being flexible or showing understanding to their situation.

Tensions between ASEAN and the junta appear to be growing, especially as the Special Envoy, Erywan Yusof, postponed his trip to Myanmar because he was not allowed to meet with all political parties. He was specifically denied any interaction with National League for Democracy leader, Daw Aung San Suu Kyi who has been detained since the attempted coup. A timeline of ASEAN’s interactions with the junta indicate the hesitation of countries such as the Philippines, Thailand and China to condemn the coup for fear of protecting their own authoritarian interests in their respective states. However, as the months have passed it has become abundantly clear to the bloc that the junta’s lack of will or interest in cooperating through progressive dialogue has amounted to more frustration.

Internally, the Tatmadaw has shown increasing signs of fragmentation. Record numbers of soldiers are defecting. The People’s Soldiers is a new group of defected Myanmar military soldiers who have joined the resistance movement in various forms. This week they issued a statement which said that the Generals committed treason and breached military law by forcing the President of Myanmar to forcibly resign.

Civilians in Chin State are living in a state of ongoing panic and fear due to the increased junta presence. The Tatmadaw is exercising all efforts to weaponize their response to the Chinland Defense Forces and local armed resistance groups. As reported by the Assistance Association for Political Prisoners, on October 11, a 29 year old and 34 year old from Falam Township, Chin State were killed by the junta. On the 13th, their bodies were discovered with bullet wounds to their faces and upper bodies.

In Kanpetlet, residents say that they are living in constant fear: Everything is uncertain and clashes can happen at any time.” Intensified offensives have forced the majority of the town to flee to safety. Religious minorities are also being targeted. Chin rights groups say there have been at least 20 cases of Christian churches, leaders and volunteers being caught in the crossfire of attacks.

In Kayah State, human rights abuses are increasingly rampant. Civilians have been targeted and as a result, their livelihoods are in grave threat amid their desperation for survival. As reported by the Assistance Association for Political Prisoners, two brothers who had been displaced by violence were arrested while returning to their village in Demawso Township, Kayah State to take food. The junta soldiers shot both brothers, Kyaw Hein died and Daw Minit was injured on his head.

Displaced villagers in Hpruso township are in dire need of emergency aid and support. The junta has denied the flow of aid, and life-saving materials such as food, water and medicine.

Civil society organizations in Shan State have expressed the vulnerabilities being protracted from ongoing fighting has led to gaps in urgently needed food and medicine for displaced populations. Clashes between the Restoration Council of Shan State and the Ta’ang National Liberation Army have made it nearly impossible for villagers forced to flee to return home. The Tatmadaw is also arresting youths and targeting them for alleged ties to detonations on military businesses, including Mytel communication towers. According to reports, the junta has been shooting indiscriminately at people on the street, which has only contributed to growing fears throughout the state.

Air KBZ engineer dies in prison after being accused of tampering with passenger...
Scroll to top