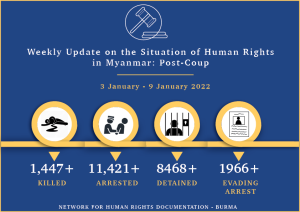 Myanmar has a message to Cambodian leader, Hun Sen: You are not welcome. His visit symbolizes support for the murderous regime who have killed, arrested and detained hundreds of innocent people with impunity.

The leaders of the military junta have been violently steering the country off course for decades. Since 1 February, their selfishness and violence has heightened fears and anxieties as older generations are forced to relive traumas and a younger population grapples with what the reality of military rule looks like. Hun Sen shaking hands with Min Aung Hlaing, a ruthless dictator does not nothing but seemingly accept the mass crimes of soldiers routinely violating civilian rights and freedoms.

Civil society has been vocal in their opposition to the meeting between the two leaders in which over 190 organizations issued a joint statement condemned Hun Sen for supporting the terrorist regime. The calls were supported by Cambodian human rights groups as well. Protests across Myanmar were attended by activists, human rights defenders and civilians  who echoed calls rejecting Hun Sen’s visit scheduled on 7 January.

Min Aung Hlaing has failed to act on commitments he made to the Association of Southeast Asian Nations (ASEAN) bloc, including halting violence against peaceful demonstrators, among other recommendations in the 5-Point Consensus. All efforts by ASEAN have been disappointing and have not led to any meaningful change. The fact that ASEAN chose to not invite representatives of the military to several meetings has not deterred the junta from their war path.

The General Strike Coordination Body released a statement also denouncing Hun Sen’s visit on the grounds that it ‘ignores the will of the Myanmar people.’ While visiting, ousted civilian government leaders, including Aung San Suu Kyi, are not allowed to meet with the Cambodian officials.

The message being sent is clear, and must be heard. Cambodian is also riddled with a past of mass atrocities which amounted to genocide. Hun Sen has governed without hesitating to also squander voices of opposition, and has also made an enemy of the free press. “Dictators supporting dictators,” will not bode well and risks setting a standard that these meetings are to be accepted.

ASEAN has an obligation, as does the rest of the international community, to cut all business ties with the criminal regime and engage in a constructive dialogue with the National Unity Government.

The Chin Human Rights Organization (CHRO) has reported the deliberate burning of Thantlang town,  making it the 18th time the junta has deliberately scorched the area since 9 September. CHRO has been documenting the widespread human rights violations being perpetrated in Chin State. In Thantlang alone, over 10 000 people have been displaced. According to CHRO, as of 3 January, over 700 structures, including seven churches and a dozen religious buildings have been intentionally set on fire since 9 September.

As well documented by the media and rights groups, Chin State had known only peace  for many years until a strong resistance movement emerged after the attempted coup. Despite ongoing threats by the illegal junta to cooperate, or face violent threats to their lives and infrastructure, the Chin people have shown great courage in the midst of such horrors. Evidence and documentation of orders for soldiers to ‘clear the town’ must be taken seriously by the international community to hold the regime to account.

Fighting between the military junta and the Ta’ang National Liberation Army (TNLA) in northern Shan State intensified in a suspected retaliation after two TNLA soldiers were shot and killed by unidentified gunmen. Six locals who were caught in the crossfire and all from the same family, were injured when an artillery shell landed on their home. Three children under the age of five also sustained injuries.

Fighting in Shan State has forced many civilians to flee their homes, prompting the Committee for Shan State Unity Committee to issue a statement calling on all stakeholders to find a solution to end violence and keep civilians safe.

The Karenni National Progressive Party announced that they are committed to exposing the junta’s widespread human rights violations by creating a documentary. One quarter of the population in conflict-torn Kayah (Karenni) State has been forcibly displaced by the Myanmar military’s violence. The junta has committed serious violations which have forced the most vulnerable to the brink of survival.

The announcement comes as more harrowing evidence emerges of the massacre where more than 30 people were killed in Kayah (Karenni) State, including women, children and the elderly. During a press conference, a doctor who carried out post-mortem examinations of the remains called the crimes against the victims said they were “murdered in the cruelest and most inhumane manner I have ever seen in my entire life.”

Over the weekend, the Kayah (Karenni) capital city of Loikaw was violently assaulted by junta armed forces in clashes which killed at least four civilians and displaced over 1000. The civilian armed resistance in Kayah (Karenni) State has been met with brute force from the Myanmar military. The ‘scorched-earth’ tactics being used are indicative of a worrying tactic of the junta to eliminate opposition, even at the cost of innocent civilian lives.