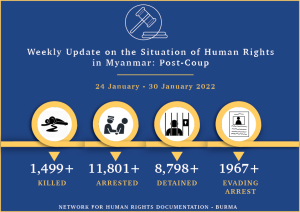 As the one year of the coup approaches, Amnesty International declared “If the international community continues to drag its feet on the grave human rights violations including lethal violence targeted at protestors that we have seen in Myanmar this past year, many more people will suffer and this human rights crisis could worsen.” The international community has ignored these warnings for nearly 365 days. It is unacceptable that such inaction has followed the mounting calls from voices of activists and communities on the ground who have clearly communicated their needs, in addition to taking great risks to document the horrors of their situation. For too long, they have waited for action and for their lives to be protected. Indeed, the international system has failed them in all of their obligations to act with intention.

Ahead of the United Nations Security Council (UNSC) meeting with a minister from Cambodia (the current Association of Southeast Asian Nations Chair) and the UN special envoy for Myanmar Noeleen Heyzer, over 280 organizations including ND-Burma and several member organizations, called for the UNSC to address the deteriorating humanitarian situation and take urgent steps to protect civilian during this time of crisis. Human Rights Watch also called on the UNSC to ‘abandon their timid approach to their Myanmar military’s mounting atrocities and replace mealy-mouthed statements with tough action.’ These are all reasonable requests with overwhelming evidence of the junta’s crimes against humanity and war crimes which warrant immediate action.

As of 31 December 2020, there were 980 000 refugees and asylum-seekers from Myanmar in neighbouring countries. Between January 2020 and December 2021, over 775 000 people were internally displaced within Myanmar. This significant growth in displacement speaks to the harrowing violence being deployed by state-backed forces. The Myanmar Army is acting with lawlessness emboldened by impunity due to the lack of consequences they have faced. However, it cannot be denied that their onslaught of grave atrocities has not forced civilians to submit to their dictatorship and authoritarianism. By the regime’s own account – they are failing in their offensives and the growing number of Tatmadaw defections speaks to fragments within the junta itself.

The families and friends of two volunteer Kachin teachers who were killed seven years ago by the military junta are still waiting for justice. Maran Lu Ra and Tangbau Hkawn Nan Tsin were volunteering with the Kachin Baptist Convention when they were raped and stabbed to death in January 2015. The Myanmar Army destroyed evidence of their crime and there has yet to be any accountability for the young women. Since their death, dozens of civilians in Kachin State have been killed by the military junta, especially since the attempted coup. The sense of solidarity across Kachin State is strong with commitments to ‘defeat the military dictatorship.’

Fighting in Karen State has forced thousands of people to flee. The Myanmar junta is planning to further increase their offensives against Karen armed opposition groups, making the situation for internally displaced people even more uncertain. Thailand’s Prime Minister, Prayut Chan-o-cha, told the United Nations Secretary-General’s Special Envoy for Burma, Noeleen Heyzer, on January 17, 2022 that displaced villagers would not be pushed back. However, in stark contrast to these comments, there are reports that displaced people are being pressured by Thai authorities to return to Karen State. This is increasingly worrisome as fighting in Lay Kay Kaw has taken place steadily for about one month. The one peaceful town has now become a battlefield. Reassurances for safety for those who have returned have not been fulfilled. On 3 January, artillery shelling killed a woman and injured three others who returned to Palu Lay village. IDPs are in desperate need of medicine, food and adequate shelter. Karen civil society organizations have largely filled the gaps in the provision of these materials but more support is needed.

On 27 January, the Karen Human Rights Group reported that a landmine planted by LIB #285 at K’Wer Village, Lermulah Township killed a mother and her six year old son.

Civilians in Kayah (Karenni) State have been deprived of their humanity as unrelenting fighting makes the future more uncertain for civilians. The crimes perpetrated in Kayah (Karenni) State have devastated livelihoods. Details of the Christmas Eve massacre in particular in which the junta burned alive several dozen civilians attempting to flee violence continue to emerge. The victims included 26 males and five females. Family members have recounted endless calls that went unanswered to the victims because they were caught in the junta’s merciless attack.

Ethnic Revolution Organizations are among those who have called on the international community and the Association of Southeast Asian Nations (ASEAN) for a no-fly zone against the military junta, and to take greater steps to ensure civilian safety zones. This includes the Karenni National Progressive Party. Civilians have been targeted at IDP camps, as was the case when three people were killed and seven injured during an airstrike by the junta launched at a refugee camp in eastern Kayah (Karenni) State. Karenni police officers have also called for the dictatorship to be dismantled and have demanded justice for victims by ensuring the regime is put on trial at the International Criminal Court for crimes against humanity.

Worse yet – the bodies of six people, including women and children, were found mutilated in a septic well. The victims include three 17 year old boys and a 16 year old boy. A 63 old woman was also found with her 23 year son with evidence of torture on their bodies including bullet and stab wounds.