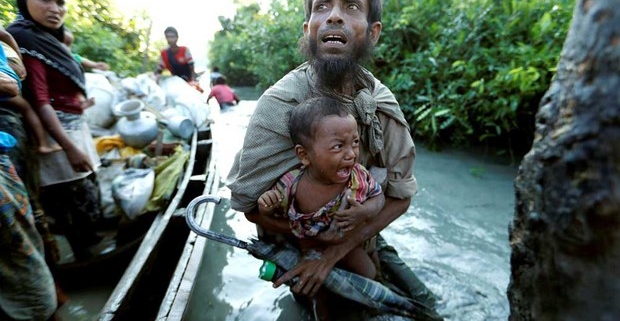 The move will bring greater scrutiny on the Myanmar military, says a Rohingya activist.

The United States has declared as a genocide the Myanmar military’s 2017 deadly crackdown against the Rohingya Muslim minority that killed thousands and forced an exodus to neighboring Bangladesh, Secretary of State Antony Blinken announced Monday.

Human rights activists welcomed the move as overdue and essential for stepping up pressure on the military, and making it accountable for crimes against humanity. According to American investigators, the military was responsible for atrocities including mass killings, gang rapes, mutilations, crucifixions, and the burning and drowning of children.

Blinken said that as of Monday, the United States had concluded that other than the Holocaust, genocide had occurred eight times – the eighth time against the Rohingya.

“I have determined that the members of the Burmese military committed genocide and crimes against humanity against Rohingya,” Blinken said in remarks at the U.S. Holocaust Memorial Museum in Washington on Monday.

“The attack against Rohingya was widespread and systematic, which is crucial for reaching a determination of crimes against humanity.”

Blinken said that among the sources for the determination was a joint report published in November 2017 by the museum’s Simon Skjodt Center for the Prevention of Genocide and the human rights group Fortify Rights. The report was based on a survey of more than a thousand Rohingya refugees living in Bangladesh, all of whom were displaced by the violence in 2016 or 2017.

“Three quarters of those interviewed said that they personally witnessed members of the military kill someone. More than half witnessed acts of sexual violence. One in five witnessed a mass casualty event, that is, the killing or injuring of more than 100 people in a single incident,” Blinken said.

“These percentages matter. They demonstrate that these abuses were not isolated cases. … This demonstrates the military’s intent went beyond ethnic cleansing to the actual destruction of Rohingya.”

Following Blinken’s announcement, New York-based Human Rights Watch said that the U.S. needed to coordinate its “long overdue action” with other countries to pursue justice for the mass crimes committed against the Rohingya.

“The U.S. government should couple its condemnations of Myanmar’s military with action,” John Sifton, Asia advocacy director at Human Rights Watch, said in a statement. “For too long, the U.S. and other countries have allowed Myanmar’s generals to commit atrocities with few real consequences.”

The rights watchdog said that to deter future abuses, Washington should impose tougher sanctions on the foreign currency revenues the Myanmar military makes from oil and gas revenues, and increase the enforcement of existing sanctions.

“The military utilizes the bulk of these revenues to support its expenditures, which include extensive purchases of arms and attack aircraft from Russia, China, and other countries,” the group said in its statement.

“By formally declaring a genocide took place against the Rohingya, the U.S. is firmly acknowledging the scope and horror of the junta’s violence,” the group’s Executive Director Kyaw Win said in a statement Monday.

“This declaration must be followed by further action. The junta must be completely cut off from the world, deprived of cash flow and weapons, and resisted until they fall from power.”

In 2018, U.N. investigators found that Myanmar’s military carried out mass killings and gang rapes of Muslim Rohingya with “genocidal intent.” The rights group Doctors Without Borders has estimated that at least 6,700 Rohingya died in the 2017 crackdown.

But to date, the U.S. government had described it as “ethnic cleansing” – not using the “genocide” designation, which carries more legal weight.

Under Article 2 of the 1948 United Nations Convention on the Prevention and Punishment of the Crime of Genocide, genocide is defined as “acts committed with intent to destroy, in whole or in part, a national, ethnic, racial or religious group.”

The atrocities were committed during the tenure of the civilian government of Aung San Suu Kyi who in December 2019 defended the military against allegations of genocide at the International Court of Justice in The Hague. The Nobel Peace Prize winner and one-time democracy icon now languishes in prison – toppled by the same military in its Feb. 1, 2021 coup.

Myanmar, a country of 54 million people about the size of France, recognizes 135 official ethnic groups, with majority Burmans accounting for about 68 percent of the population. The Rohingya ethnicity is not recognized.

The Rohingya have faced decades of discrimination in Myanmar and are effectively stateless. They have been denied citizenship. Burmese administrations have refused to call them “Rohingya” and instead use the term “Bengali.”

The 2017 crackdown was triggered by a Rohingya insurgent group’s attack on police outposts in Myanmar’s Rakhine state, leading to a disproportionate military response that caused about 740,000 Rohingya civilians to flee to neighboring Bangladesh – what the military and Aung San Suu Kyi, then the civilian ruler of Myanmar, called a “clearance operation.”

But a State Department-commissioned investigation found that the Rohingya were in a highly precarious situation in the months and years leading up to the attacks on the police stations, and their situation was fast deteriorating, according to Daniel Fullerton of Public International Law & Policy Group, who managed the probe.

“The collected data revealed years-long patterns of gradually worsening violence and widespread human rights violations targeted against the Rohingya, which began to dramatically increase in severity and frequency in the year leading up to the major attacks of 2017,” Fullerton said in testimony at a U.S. Commission on International Religious Freedom hearing last May.

The military’s retributory attacks for the Rohingya insurgents’ August 2017 assault on police posts was swift – and brutal.

Blinken spoke of the planning that went into pre-attack preparations – such as military personnel “blocking exits to villages before they began their attacks, [and] sinking boats full of men, women and children as they tried to flee to Bangladesh.”

He said that the “immeasurable pain wrought by every heinous abuse” ripples outward from the individual victims to the survivors and to the wider community.

Therefore, he said, the U.S continues to provide significant support to help meet the humanitarian needs of Rohingya and all affected by their persecution. He said Washington had provided nearly $ 1.6 billion since 2017 for Rohingya refugees’ shelter and education, specialized mental health and for the psychosocial support for the victims of trauma.

Blinken said he wanted to “recognize the exceptional generosity of Bangladesh” in hosting over 900,000 Rohingya refugees, and the South Asian country’s recent efforts to vaccinate this stateless community against COVID-19.

In Dhaka, Bangladesh’s Home Minister Asaduzzaman Khan Kamal on Monday welcomed the Biden administration’s decision to declare the military’s 2017 oppression of the Rohingya a genocide.

“The U.S. announcement would help restore the civil rights of the Rohingya in Myanmar and speed up their repatriation,” he told BenarNews.

“The international community and all people should know about the genocide and other inhuman atrocities committed against the Rohingya in Myanmar.”

In no-man’s land on the Bangladesh-Myanmar border, Dil Mohammad, a Rohingya leader, said Washington’s declaration was a positive development.

“The massacre of the Rohingya in Myanmar is a classic example of genocide. The international community believes it but they did not officially recognize it,” the Rohingya leader in Bandarban district told BenarNews.

“If the international community speaks in one voice against the brutality of the military, the decades-old genocide and atrocities targeting the Rohingya would cease and our return to our homeland be ensured.”

The designation of the Rohingya expulsion campaign as genocide follows the January 2021 decision by Blinken’s predecessor, Mike Pompeo, who determined that China’s mass incarceration and coercive birth control policies toward the Uyghur minority in China’s northwestern Xinjiang region constituted genocide.