Washington has condemned the Myanmar junta’s horrific use of violence in Chin State and called for urgent international action to hold the Myanmar military accountable for its brutality. The United States (US) intervention comes after regime forces shelled the Chin State town of Thantlang again last Friday, destroying over 160 houses and buildings including two churches.

On Sunday, US State Department spokesman Ned Price said in a press statement that such brutal actions by the military regime against people, their homes and places of worship lays bare the junta’s complete disregard for the lives and welfare of civilians.

“These abhorrent attacks underscore the urgent need for the international community to hold the Burmese [Myanmar] military accountable and take action to prevent gross violations and abuses of human rights, including preventing the transfer of arms to the military,” the spokesperson said in the statement. 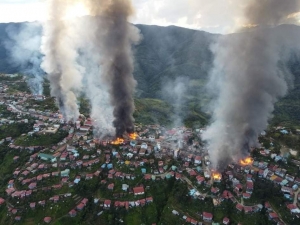 At least 164 houses out of 2,000 homes in Thantlang burned down after junta artillery strikes on Friday. The fires started after the bombardment and engulfed the town until Saturday morning, as the town’s residents have largely fled and any attempt by people in surrounding villages to extinguish the fires would have been a risk to life, according to the Chin Human Rights Organization (CHRO).

The majority of Thantlang’s population had already evacuated the mountain-top town due to earlier artillery strikes. Around 20 buildings burned down in late September after junta shelling, while a Christian pastor who tried to help put out the fires was killed by regime troops.

Many people in Thantlang have now lost not only their homes, but all their belongings.

Junta forces also deliberately torched houses after the artillery strikes, according to local resistance groups. The shelling is said to have started after a soldier who was looting a shop was shot dead by civilian resistance fighters.

During the latest bombardment on Friday, the Church on the Rock and the Presbyterian Church caught fire, along with a building attached to the Thantlang Baptist Church, the largest congregation in the town, CHRO said in their statement. Save The Children also reported that their office was destroyed in the blaze. The London-based charity said in a statement that it is concerned for the safety of 20 children and their teachers in an orphanage located at the entrance of the town.

Junta spokesman Major General Zaw Min Tun disputed the reports and accounts by locals of the military’s role in Thantlang’s razing as “groundless”. He accused local People’s Defense Forces of setting fire to the houses.

Salai Issac Khen, a former Chin State municipal minister under the ousted civilian National League for Democracy government, condemned the military’s shelling of Thantlang, saying that the regime will have to take responsibility for the horrific act.
“It is not easy to build a house in mountainous Chin State. Chin people have no reason to burn down their houses,” the former minister wrote.
Dr. Sa Sa, an ethnic Chin and the parallel National Unity Government’s Minister of International Cooperation, said he was shocked by the sheer level of brutality and the cruel disregard for humanity displayed by the junta forces. 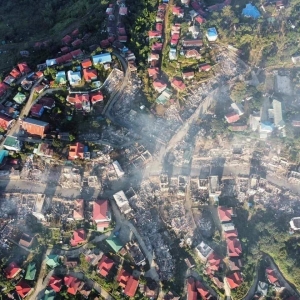 He said his homeland has been subjected to an extreme campaign of violence and terror for standing strong in the struggle for democracy and freedom.

“Without the support and intervention of the international community, the fires lit in Chin State by the murderous military regime will engulf the entire nation,” Dr. Sa Sa said in a urgent appeal letter.

The minister called on the international community to take immediate and decisive action to cut off the junta’s access to money, financial services, fuel, weapons and ammunition and, most all, international legitimacy.