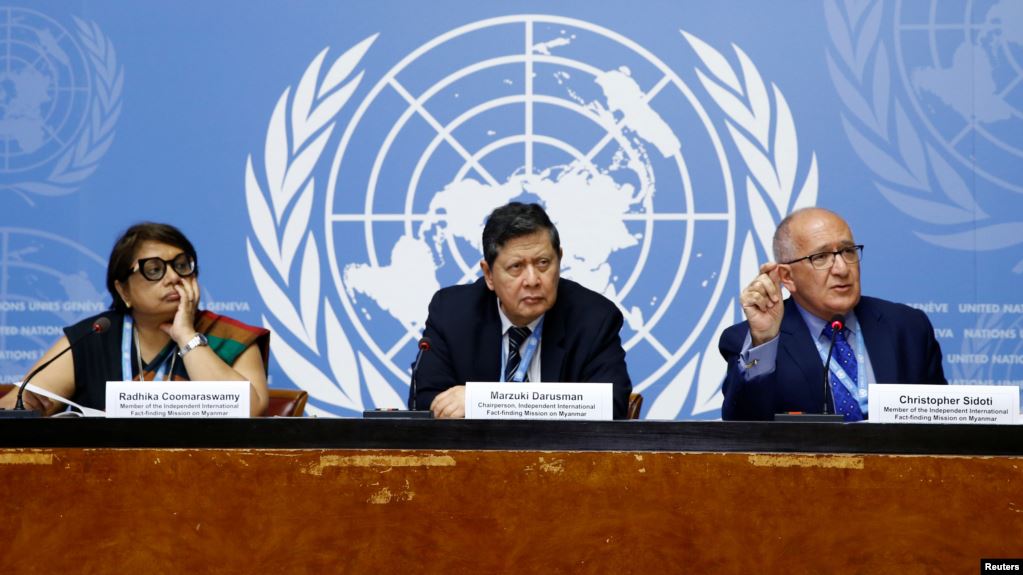 GENEVA (5 August 2019) – The U.N. Independent International Fact-Finding Mission on Myanmar urged the international community on Monday to sever ties with Myanmar’s military and the vast web of companies it controls and relies on. The Mission said the revenues the military earns from domestic and foreign business deals substantially enhances its ability to carry out gross violations of human rights with impunity.

The report, for the first time, establishes in detail the degree to which Myanmar’s military has used its own businesses, foreign companies and arms deals to support brutal operations against ethnic groups that constitute serious crimes under international law, bypassing civilian oversight and evading accountability.

The Mission said the U.N. Security Council and Member States should immediately impose targeted sanctions against companies run by the military, known as the Tatmadaw. It encouraged consumers, investors and firms at home and abroad to engage with businesses unaffiliated with the military instead.

The Mission also called for the imposition of an arms embargo, citing at least 14 foreign firms from seven nations that have supplied fighter jets, armored combat vehicles, warships, missiles and missile launchers to Myanmar since 2016. During this period the military carried out extensive and systematic human rights violations against civilians in Kachin, Shan and Rakhine States, including the forced deportation of more than 700,000 ethnic Rohingya to Bangladesh.

“The implementation of the recommendations in this report will erode the economic base of the military, undercut its obstruction of the reform process, impair its ability to carry out military operations without oversight and thus reduce violations of human rights and international humanitarian law, and serve as a form of accountability in the short-term,” said Mission Chair Marzuki Darusman.

The Mission’s report exposes two of Myanmar’s most opaque enterprises, Myanmar Economic Holdings Limited (MEHL) and Myanmar Economic Corporation (MEC), both of which are owned and influenced by senior military leaders. Among them are Commander-in-Chief Senior General Min Aung Hlaing and Deputy Commander-in-Chief Vice Senior General Soe Win, both of whom the Mission previously said should be investigated and prosecuted for genocide, crimes against humanity and war crimes.

MEHL and MEC own at least 120 businesses involved in everything from construction to pharmaceuticals, manufacturing, insurance, tourism and banking. Both companies, along with at least 26 of their subsidiaries, hold licences for jade and ruby mining in Kachin and Shan states. International human rights and humanitarian law violations, including forced labour and sexual violence, have been perpetrated by the Tatmadaw in northern Myanmar in connection with their business activities.

“Given the extent of Tatmadaw involvement in jade and ruby mining in northern Myanmar, businesses and consumers should conduct heightened due diligence to ensure that they are not purchasing, selling, trading or otherwise using gems produced or sold by enterprises owned or influenced by the Tatmadaw,” said Mission Expert Radhika Coomaraswamy.

The investigative report follows recommendations the Mission’s Experts made last year after documenting how Myanmar’s armed forces brutally violated the human rights of ethnic groups nationwide. The 2018 report focused heavily on “clearance operations” against the Rohingya in Rakhine State that began on 25 August 2017, when security forces killed thousands of Rohingya civilians, raped and sexually abused women and girls, and burned their villages to the ground.

The 111-page report, released Monday in Geneva, contains five annexes that list military businesses and foreign and domestic businesses that contribute to or benefit from the Tatmadaw and its operations.

While it is clear that Myanmar authorities must be held accountable for the human rights violations they perpetrated, the report emphasizes that concrete action must also be taken to address corporate responsibility to respect human rights in Myanmar.

The report details how 45 companies and organizations in Myanmar donated over 10 million dollars to the military in the weeks following the beginning of the 2017 clearance operations in Rakhine State. So-called “crony companies” with close links to the Tatmadaw later financed development projects in Rakhine State that furthered the military’s “objective of re-engineering the region in a way that erases evidence of Rohingya belonging to Myanmar.”

“Officials of these companies should be investigated with a view to criminal prosecution for making substantial and direct contributions to the commission of crimes under international law, including crimes against humanity,” Mission Expert Chris Sidoti said.

The report named two companies, KBZ Group and Max Myanmar, which helped finance the construction of a barrier fence along the Myanmar-Bangladesh border “knowing that it would contribute to the suffering and anguish associated with preventing the displaced Rohingya population from returning to their homes and land.”

The report found that at least 15 foreign firms have joint ventures with the Tatmadaw, while 44 others have some form of commercial ties with Tatmadaw businesses. These foreign companies risk contributing to, or being linked to, violations of international human rights and humanitarian law. At a minimum, they are contributing to supporting the military’s financial capacity. All companies doing business in or buying goods from Myanmar should conduct heightened due diligence to ensure they are not benefiting the Tatmadaw.

“The Mission’s findings from this investigation provide the international community with a more complete understanding of Myanmar’s human rights crisis; one that should compel the international community and individual States to take a coordinated multilateral approach to accountability, justice and ending the human rights crisis in Myanmar,” said Mission Expert Radhika Coomaraswamy.

“The revenue that these military businesses generate strengthens the Tatmadaw’s autonomy from elected civilian oversight and provides financial support for the Tatmadaw’s operations with their wide array of international human rights and humanitarian law violations,” said Mission Expert Christopher Sidoti.

Mission Chair Marzuki Darusman said: ”Removing the Tatmadaw from Myanmar’s economy entails two parallel approaches. In addition to isolating the Tatmadaw financially, we have to promote economic ties with non-Tatmadaw companies and businesses in Myanmar. This will foster the continued liberalization and growth of Myanmar’s economy, including its natural resource sector, but in a manner that contributes to accountability, equity and transparency for its population.”

The Fact-Finding Mission will present its final report to the UN Human Rights Council in September 2019.

The full report on the economic interests of the Myanmar military, its annexes, supporting materials and summary translations in Myanmar language, Jingpho (forthcoming) and Rohingya can be accessed at: https://www.ohchr.org/…/EconomicInterestsMyanmarMilitary.as…