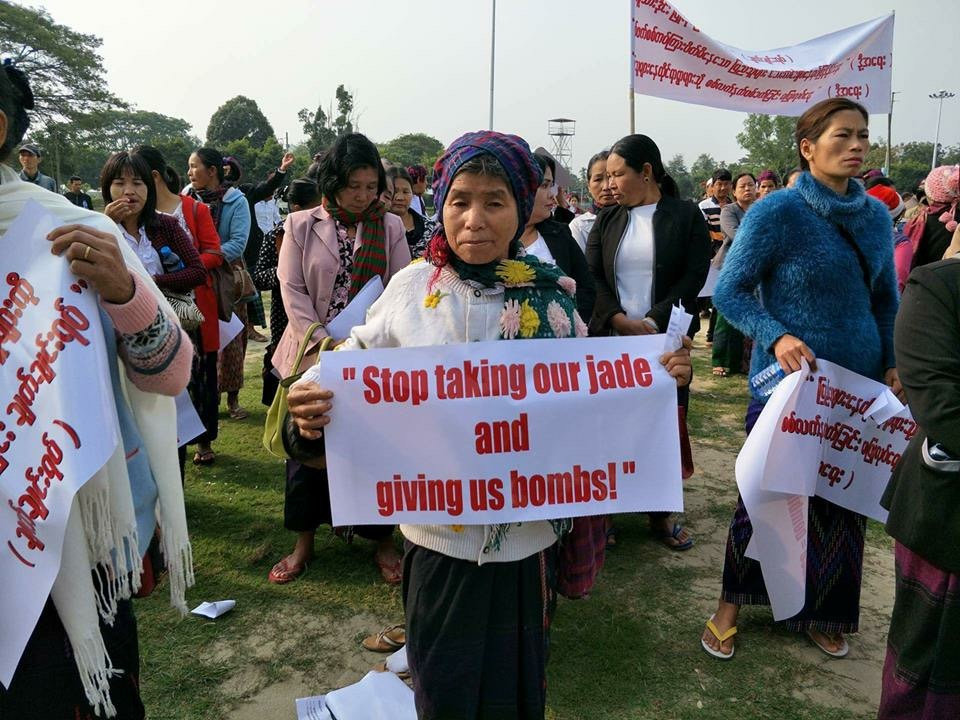 The New Mon State Party and Lahu Democratic Union signed the Nationwide Ceasefire Agreement (NCA), bringing the total number of signatories to 10. The New Mon State Party said it had faced government and military pressure to sign, including increased militarisation of their area, withholding of development money, and having their offices raided.

The government pushed the next session of the Panglong Peace Conference to May.

Reuters published its findings of the investigation being conducted by journalists Wa Lone and Kyaw Soe Oo before they were arrested in a suspected case of entrapment in January. The investigation found evidence that government security forces together with Buddhist villagers had executed Muslim civilians and burned their homes – often with people still inside. This included the ten men found in a mass grave in Inn Dinn in December. The investigation was based on interviews with Buddhist villagers and members of the security forces, some of whom were willing to speak on the record. Soon after, the government began bulldozing dozens of Muslim villages in Rakhine State in a suspected effort to destroy evidence of atrocities. An Amnesty investigation in March found that security forces were building military bases where Muslim villages had once stood.

The government has said it investigated the killings at Inn Dinn and found that seven soldiers, three policemen and six Buddhist villagers were guilty of executing the men (who the government maintains were terrorists). The accused civilian and police will be tried in a civil court, but it remains unclear what action will be taken against the soldiers, who are free from civilian oversight.

In advance of a meeting of EU foreign affairs ministers, over 100 UK MPs signed a letter urging the British Foreign Secretary push his European counterparts to back a referral of Burma’s Commander-in-Chief Min Aung Hlaing to the International Criminal Court. EU ministers agreed to look into activating targeted restrictive measures against senior military officers responsible for rights violations.

The Burmese government told the UN Security Council now was “not the right time,” for a visit to the country.

Some 5,000 people rallied in the capital of Kachin State to call for a pause in military offensives to allow about 2,000 people trapped in a conflict zone to seek refuge. The conflict has been accompanied by human rights violations such as arbitrary arrest, forced labour, and killing. Two Kachin IDPs were found dead in March after last being seen in military detention in January; the police said it had opened a murder investigation into the case.

The EU called for an end to the fighting and pressed the government to fulfil its international obligations to protect civilians. In discussions with Kachin political parties the EU also said it was reconsidering providing food aid to Kachin IDPs.

Eight villagers in Southern Shan State were given a ten-year sentence for supporting NCA-signatory the Restoration Council of Shan State/ Shan State Army – South (RCSS/SSA-S). The accused had been detained by the military since July last year for allegedly failing to provide information about the armed group.

Muse Township in Shan State, an active conflict area, has issued a ban on ethnic soldiers receiving medical treatment in state hospitals, which is a violation of the Geneva Convention.

Four men have been held as suspects in the killing of NLD legal advisor U Ko Ni in January 2017, with one having been released on bail. A group of people have appeared at the trialwearing t-shirts bearing the slogan “Eat well before you die”, which is considered warning of impending revenge in Burmese. The military has denied involvement, despite ex-military officers being suspected of having ordered the killing.

A trial of eight protesters who were shot by police in January started in a makeshift court in a Rakhine prison due to concerns about security and the health of the suspects, who had not fully recovered from their gunshot wounds. The detainees had previously been shackled to their beds by authorities to make sure they did not escape questioning. The men had joined thousands protesting the banning of a memorial event to mark the fall of the Arakan kingdom, which ended with 7 demonstrators being killed by police.

A Rakhine MP and an author have been charged with high treason for allegedly fuelling the January protests. The author had reportedly given a speech the day before the protest erupted criticising the government for treating the Rakhine people like “slaves” and calling for armed struggle.

A former administrator in Mrauk-U was murdered at the end of January, with four suspects currently being detained. The accused claim the murder was ordered by members of the Arakan Army, which has denied the allegation.

Amendments to Burma’s controversial protest law were examined in parliament, causing concerns that there will be a further crackdown on freedom of expression in the country. The changes included a requirement that sources of funding are identified and that people encouraging others to join demonstrations which could harm the country’s “security” and “public morality” are jailed. The amendments were approved in March.

Student activists condemned the government’s support of a university’s decision to dismiss 56 students after they held a protest demanding an increase in the education budget. The Ministry of Education initially said the students could be re-accepted if they pledged not to protest again – an offer they refused and a representative of the All Burma Federation of Student Unions slammed as “the very ugly action of a government that came to office shouting democratic slogans.” The students were ultimately allowed to return to university without having to sign the pledge.

A spokesman for the Arakan National Party was released after serving an 18-month sentence for having published a statement accusing the military of having committed human rights violations in Rakhine State. He had been charged under Section 505 of the Penal Code, which criminalises statements that can cause “fear or alarm”.

The Dawei Special Economic Zone (SEZ) has once again been accused of grave human rights violations including forced evictions, a lack of transparency, and environmental destruction.

Government plans to create two giant parks protecting 1.3 million acres of mountainous jungle in south eastern Burma could prevent 16,000 Karen refugees on the border from returning. An advocacy group said no further action should be taken until refugees have been consulted and their right of return guaranteed.

Ethnics want the government to finally release accurate data from the 2014 census so minorities can be better supported with services such as healthcare and education.

women and the LGBTI community. Our members are:

1. All Arakan Students’ and Youths’ Congress