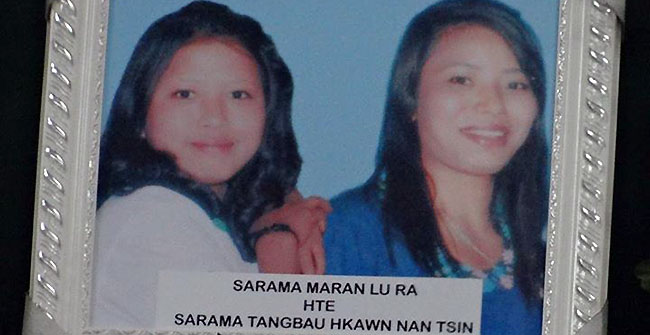 Three years of uncertainty over murder of Kachin school teachers

On the three year anniversary of the rape and murder of two Kachin schoolteachers in Shabuk Kawng Kha, Kachin State, the Network for Human Rights Documentation – Burma (ND-Burma) calls on the government to launch a fresh investigation into the case, which remains unsolved in spite of significant evidence implicating government soldiers.

In the early hours of January 2015, screams were heard from the church compound where Maran Lu Ra and Nan Tsin were staying while working as voluntary teachers for the Kachin Baptist Convention. Local villagers went to investigate but left after hearing sounds coming from the bathroom. The bodies of the two young women were discovered the next morning, bearing marks of physical and sexual assault. Maran Lu Ra and and Tangbau Hkwan Nan Tsin were 20 and 21 years old, respectively.

A police investigation into the case failed to detain a single suspect and civil society has accused the authorities of a deliberate cover-up to protect government soldiers from Light Infantry Battalion (LIB) 503, who had arrived in the village the day before the murder and were occupying a number of houses near the church compound.

An investigation conducted by ND-Burma member the Kachin Women’s Association in Thailand (KWAT) and the NGO Legal Aid Network found evidence incriminating soldiers, including: military boot prints found outside the women’s home; ten soldiers who left the village shortly after the murder took place and have never been questioned; a villager in whose house the military commander was staying being sent away without explanation just before the crime was committed; and 5.3 million kyat (approx USD 4,800) being given to each of the victims’ families by the military.

The same investigation found that police had also failed to follow basic protocol when gathering evidence and interviewing suspects, undermining the validity and impartiality of the inquest. Physical evidence was collected haphazardly and in such a way that it could have been tampered with and final DNA results were never released. Police also tortured a local man and pressured him to confess to the crime by offering material and financial support.

The military also wielded considerable control over the police inquiry, with soldiers taking over the crime scene and required anyone wanting to enter to having to gain permission from the military first. Only 28 out of the 40 soldiers temporarily stationed in the village were questioned by the police, with none of the examinations taking longer than 5 minutes. Information gathered by police following interrogation of villagers was passed directly to the military.

The military has threatened legal action against anyone who accuses its troops of involvement in this case. The commander of Light Infantry Battalion (LIB) 503 also directly threatened villagers, saying: “Our military column has 20 mortar shells. If we are targeted as suspects, the entire village will be fired at and burnt down.”

“Three years after these young women were murdered, not a single member of the Kachin community has forgotten what happened, and calls for justice are only growing fiercer. As the government’s peace process falls apart, it should finally start addressing the pain of local communities, as opposed to just negotiating with those holding guns. It is not too late to try and heal past wounds to find national reconciliation.”

ND-Burma has been collecting data on human rights violations since 2004 and our database holds some 6,000 cases that have yet to see justice. There have been a few instances of the military charging low-ranking soldiers with having committed abuses and we hope the military’s admission of extrajudicial killings at Inn Dinn in Rakhine State will pave the way for further acknowledgements of rights violations.

Independent investigation by the two arrested Reuters journalists has forced the military to admit to extrajudicial killings. Foreign governments, international bodies, human rights organizations, and Daw Aung San Suu Kyi’s government should now pressure the army to come clean on the many other abuses that have been committed across the country. Acknowledging the victims of the past is the only way to build a peaceful future.