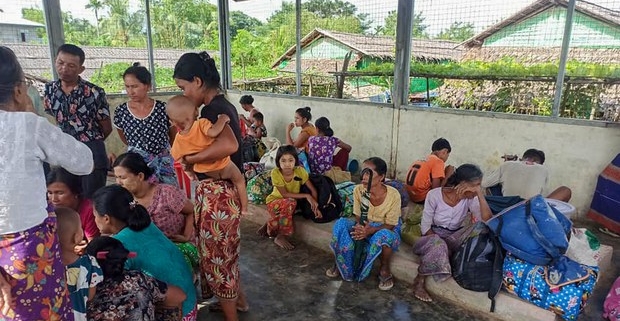 The latest clash was sparked by a military attempt to break through an AA position along a supply route.

The people, from Rathedaung township in the northwestern part of the state, were forced to leave their homes when a junta column attempted to break through an AA position along a supply route that goes through Ku Lar Chaung village, a resident of the area told RFA’s Burmese Service on condition of anonymity for security reasons.

“There’s a place called Yay Soe Chaung Byuhar in the north of Rathedaung.  The AA intercepted the military that came along this supply route yesterday,” said the source.

“We heard four junta soldiers were killed. And this morning, they came to get the bodies. We heard a lot of gunfire and explosions of heavy weapons this morning,” the source said.

RFA has not yet been able to independently confirm any casualties.

The Myanmar army has occupied most of the area since 2019, after a series of battles with the AA. More junta troops are now stationed in Ma Nyin Taung village near the battle site, sources said.

Thein Nu from Pyain Taw village told RFA that she and her family fled across the river about an hour after the fighting started at 7 p.m. She said the clashes lasted until around midnight.

“We escaped the fighting by crossing the river in a boat,” Thein Nu said. “We couldn’t worry about other families because we were so afraid. We just fled taking our children and the elderly.

“The river was so wide, but we just crossed it because we were scared. We were afraid that we’d be shot at from the air like in the past. We were also afraid that they might fire at us from a ship. A plane was circling in the air and we were frightened,” she said.

People in the area were also forced to flee fighting in 2019. They remained in refugee camps near Rathedaung for more than two years.

A fierce battle also broke out between the junta army and the AA in Rathedaung township on Aug. 13, and the Rathedaung-Maungdaw-Buthidaung road was closed indefinitely by the military.

Local villagers said the commander of the military’s light infantry regiments 536, 537 and 538, based in Rathedaung, demanded that the AA leave its camp in Pyar Chaung Gyi village on Aug. 25.

Residents also told RFA that the junta bombed suspected AA camp sites in the northern part of Maungdaw township, along the Let Pan and Wai Lar mountains on the Myanmar-Bangladesh border on Saturday, Monday and Tuesday.

They said the AA has also launched attacks on the junta military camp on Kha Moung Seik Byuhar hill since Aug. 25, and the junta side has suffered many casualties.

Neither side has released any information about the fighting.

AA spokesman Khine Thukha told RFA on Monday that the AA was defending civilians in the area.

“Whether the fighting will be more intense or not depends on the activities of the Myanmar army,” he said.

“If they launch more attacks, we will retaliate. The Burmese army has been targeting mainly the Rakhine people in Rakhine state and imposing various restrictions on the people,” Khine Thukha said.

The Myanmar military has opened up to 15 checkpoints along the Ann-Sittwe road and has strictly limited travel and the flow of goods, the AA said.

RFA tried to contact Hla Thein, attorney general of Rakhine and the junta’s spokesman in the region, about the situation, but he did not respond.

Pe Than, a former representative of the People’s Assembly in Rakhine, said the fighting might be more intense than it was two years ago.

“In the past, there were clashes, but it was not about capturing camps. Now, the AA side is gradually taking over the border guard camps and the Burmese military has been gradually retreating,” Pe Than said.

“The junta troops only have air support. They get their food rations only from the air. They can only fire their heavy weapons from afar. That’s all they can do. The ground troops are all surrounded. So this is no longer an ordinary battle. It’s meant to take over territory. It all started from the north,” he said.

The junta’s army and AA troops were engaged in the townships of Maungdaw and Mrauk U as well as in Paletwa township in Chin state and the fighting has gradually expanded, according to Pe Than. He said at least 10 junta camps, including border guard stations, have withdrawn.

After a truce that lasted a year and a half, fighting between the two sides erupted again in July. Residents said more than 10,000 people have fled their homes in Rathedaung township and more than 700 in Mrauk U township as a result.

In a statement Wednesday, the AA claimed that it had captured a military camp near milestone No. 40 near the Bangladesh border area despite heavy resistance.

It said fighting has been going on in that area since the beginning of August and that the military has fired about 300 to 400 rounds of heavy weapons into the area between milestones No. 34 and No. 39.

The statement also said that the junta has recently used helicopters and jet fighters to bomb the area.

The camp fell this morning at 9:12 a.m., the statement said, and 19 junta soldiers, including Police Capt. Soe Soe Paing, were captured or killed. The AA was also able to seize weapons and ammunition.

The AA acknowledged in the statement that it suffered some casualties but didn’t say how many. The AA said it discovered fresh graves of junta soldiers who had been killed in earlier clashes.

The statement also said that there was a skirmish Tuesday night on the road about 700 meters (half a mile) west of Ma Nyin Taung village in Rathedaung township and another clash Wednesday afternoon at a spot about 500 meters west of Myeik Wa village in Paletwa township of Chin state. Both sides suffered casualties, according to the statement.

At least one civilian killed as clashes in northern Rakhine continue