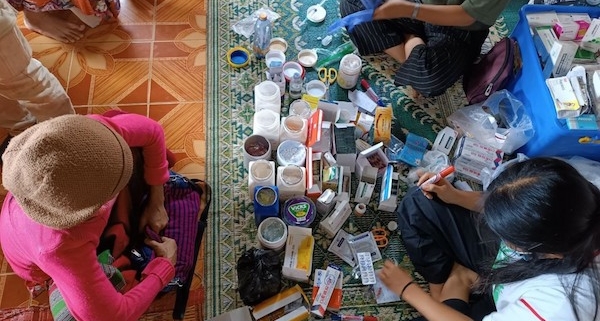 As UN aid agencies line up to sign deals with the junta, local groups fighting “for victory and humanity” continue to be the country’s real saviours

The recent rush of UN agencies to sign memorandums of understanding (MOUs) with Myanmar’s military junta has raised important questions about who is really carrying the burden of humanitarian assistance in the country—international aid agencies, or local relief groups engaged in resisting the regime?

In a recent paper, Hugo Slim, a UK-based expert on the ethics of humanitarian aid, offers some valuable insight on this issue, which has been the subject of often passionate debate in Myanmar. Titled “Humanitarian resistance: Its ethical and operational importance,” this paper examines the respective roles of local civil society organisations and activist groups participating in the Spring Revolution on the one hand, and UN agencies and the INGO aid community on the other.

There is growing frustration on both sides. Those who work for international aid agencies, especially foreign nationals, feel that they are being unfairly criticised for trying to assist vulnerable populations. While they lament that this may mean making “many hard and unpleasant compromises in order to serve higher humanitarian imperatives,” as one such individual put it to me recently, they insist that this is necessary in order to function in a very complex situation.

On the other side, local activists feel that they are speaking for most in Myanmar when they say that the country has been largely abandoned by the international community—not least by the UN and its humanitarian agencies. Looking back over the past 19 months, what they see is the failure of UN agencies and INGOs to provide aid where it is needed most. Only a trickle of aid has come into the country, and it has only reached areas where the regime has allowed them to operate.

In Slim’s terminology, this is a dispute between what he calls the  “local humanitarian resistance community” and the community of “conventional international humanitarian agencies.” The first term in particular is helpful in understanding the core of the disagreement, because it highlights the emergence of an alternative to more traditional thinking about the place of humanitarian relief work in the context of conflict.

Since its attempt to seize power in February of last year, Myanmar’s military has faced protests, civil disobedience and armed resistance; in response, it has unleashed harsh, indiscriminate, large-scale and systematic violence. Its sole aim is to crush dissent at any cost, and its inability to achieve this goal has only made it more brutal. Currently in control of less than 50% of the country’s territory, and vulnerable to attack even in areas where it has a strong presence, it routinely deploys jets, helicopters and ground troops to carry out “clearance operations” anywhere that it cannot impose its rule. The result has been a huge and growing humanitarian crisis.

This crisis has been created by the junta, and nobody else. As it continues to worsen day by day, week by week, the people of Myanmar have responded with an impressive display of what Slim calls “humanitarian resistance,” which doesn’t just address immediate needs, but also recognises that inflicting suffering on the civilian population is not just an unfortunate side effect of the country’s conflict, but an integral part of the military’s strategy. Thus, no amount of international aid will help as long as the regime continues with its systematic dislocation of civilians and destruction of their property and livelihoods.

KNU says more than 150,000 displaced in its territory

Within Myanmar, local humanitarian resistance groups enjoy the trust and appreciation of the general population, while international aid agencies are increasingly regarded with frustration and even anger. Conversely, people outside of the country, who have little knowledge or recognition of the value of resistance humanitarianism, continue to hold the international agencies in high esteem, if only because these agencies have been so skillful at promoting themselves on the world stage.

There are a number of reasons that many in Myanmar take such a dim view of international agencies. One is that they are seen as remote, top-down organisations. They are also far less numerous and diverse than local, grass-roots groups. But perhaps the most important reason is that they see themselves as obliged to remain “neutral” and “non-partisan”—unlike local humanitarian resistance groups, which, according to Slim, “simultaneously [take] sides for human life and human freedom” and “combine a desire for victory and humanity.”

In his paper, Slim looks at Myanmar and Ukraine as examples of humanitarian resistance in action. In both countries, he sees evidence of how the humanitarian response to their respective political crises aims to serve “the cause of victory”:

“In Myanmar, people committed to the resistance are boycotting government institutions and have either created new associations for the rescue and relief of people suffering from the dictatorship’s violence and increasing poverty, or they are surging existing social and religious institutions for the same effect. In Ukraine, where an entire nation is fighting for survival against outside aggression, people have come together en masse as volunteer auxiliaries to dramatically expand the provision of food relief, emergency housing and education, social work, civil defence and ambulance and fire services.”
03.Jpg

According to Slim, “All these welfare activities combine a humanitarian and a resistance purpose in the same activity. Being a resistance humanitarian in Myanmar or Ukraine means playing your part in the struggle. Working as a medic, a firefighter or an emergency teacher is experienced and understood as a valuable form of civil resistance.”

The fact that many see their humanitarian activities as part of a political struggle in no way detracts from the effectiveness of their efforts, says Slim. Indeed, he observes that humanitarian resistance has had a “significant” impact in terms of meeting people’s needs:

“Tens of thousands of people have been rescued from Ukrainian cities under Russian attack by informal groups using their own cars and covert routes in a continuous relay of rescue runs. These rescuers see their humanitarian work as part of the political struggle against the Russian invasion. In Myanmar, hundreds of thousands of people are being helped with food, healthcare and emergency education by rescue committees and relief committees formed by people from the [Civil Disobedience Movement] who have left their government jobs to work for alternative, resistance institutions.”

Unlike international aid organisations, which are relatively generously funded by donor countries, the local humanitarian resistance community is primarily financed by members of the public who are in many cases struggling with hardships of their own due to the economic fallout of the coup. An energized and self-organised diaspora is also making a contribution.

Another difference is that local humanitarian resistance work relies heavily on volunteers, whereas international aid agencies are mostly staffed by well-paid professionals. Expats employed to do international aid work typically follow a career path that takes them from one “crisis spot” to another. Most currently working “on Myanmar” do so from a safe distance—from neighbouring Thailand or even farther afield. And while they can expect to advance in their careers even under these circumstances, many humanitarian resistance workers actually inside the country have had to abandon their professions to oppose the injustice and repression of the military regime.

Needless to say, “resistance humanitarians” don’t just sacrifice their careers—they also risk their lives. On numerous occasions people providing aid have been arrested, tortured and imprisoned. Some have been killed.

Meanwhile, conventional humanitarian agencies have been struggling to respond to the suffering in Myanmar. Their mode of operations requires the explicit or implicit consent of the regime, which has hugely restricted what they can do. But beyond this, they have also been constrained by their own bureaucratic character, which makes them extremely slow and expensive, as well as prone to self-censorship.

In short, there has been an enormous disproportionality between these two very different aid communities, in terms of their cost, effectiveness, and risk. This raises the question of which side actually receives the most money from international donors. The answer, of course, is that almost all funding flows to major agencies or organisations, while virtually none reaches groups engaged in humanitarian resistance.

This is not a new situation. It has long been the case that local groups have had to operate on shoestring budgets, while international aid agencies have been far more lavishly funded. This has been a source of some resentment among local aid groups, but most have hesitated to speak out about it, as they see the international aid agencies as being at least potential allies against the real enemy—Myanmar’s repressive military.

More recently, however, many have become more outspoken about this disparity, as they watch multiple UN agencies hasten to sign MOUs with the junta. In effect, according to those who are now witnessing this spectacle from the trenches of Myanmar’s ongoing humanitarian catastrophe, these agencies have broken their long-held principle of neutrality by reaching agreements with a regime that has no legitimacy in the eyes of the country’s people.

This cannot be defended as pragmatism. A genuinely pragmatic approach would be one that involves deals with both the regime and with the National Unity Government and governing entities in liberated ethnic territories. This would enable a more fair and balanced distribution of aid into areas that are currently being served almost entirely by humanitarian resistance organisations.

At this point, there are few in Myanmar who believe that the UN agencies are primarily motivated by a desire to deliver aid more effectively. Rather, they are seen as acting mostly out of institutional self-interest. Meanwhile, resistance organisations and networks continue to do what they have been doing to save the country from the coup regime. They need to be noticed, recognised and supported by donor countries. Yangon-based UN agencies and INGOs will not provide for them.

Igor Blazevic is a prominent human rights campaigner based in the Czech Republic. He is a lecturer at Educational Initiatives, a training program for Myanmar activists, and a senior adviser with the Prague Civil Society Centre.

AN OPEN LETTER FROM 567 CIVIL SOCIETY ORGANIZATIONS CALLING FOR LEADERS OF THE...