Blog
You are here: Home / Blog / News / The United States is Quitting the UN Human Rights Council. Here’s Why T... 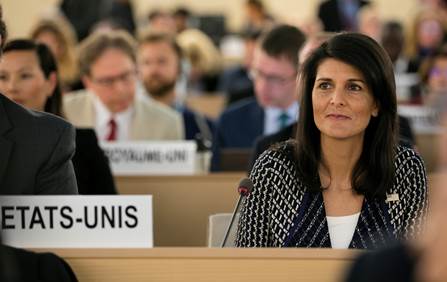 One day after being criticized by the top UN human rights official for its policy of separating children from their parents at the border, the United States announced that it is withdrawing from the main UN human rights organ, the Human Rights Council.

The timing is eyebrow raising, but this was not an entirely surprising decision.  One year ago, Nikki Haley visited the Human Rights Council in Geneva and issued an ultimatum: unless the Council reformed to her liking, the United States would pull out.

By withdrawing from the Human Rights Council, the United States is ceding yet another tool of American global leadership

Haley’s criticisms of the Human Rights Council are as old as the Council itself. When the Council was created in 2005, then UN ambassador John Bolton lobbied successfully against the Bush administration joining it. After the 2008 elections, the United States opted to join, concluding that it could better steer the work of the Council from the inside, including defending Israel, rather than from the sidelines.

Evidence suggests that this approach tangibly advanced American interests at the Council.

A report last year by the Council on Foreign Relations examined the work of the Council in years in which the United States served as a member and the years in which it did not. It found that Israel-specific resolutions decreased by more than half once the US joined the Council. The CFR report also shows how country-specific mandates were added to the Council’s to-do list when the US was on the council, compared to the years in which it was not. This move by the US is intended to discredit the UN Human Rights Council. In fact, the Council has a decent record of upholding human rights around the world.

Israel and Palestine are not the sum of the work of the Human Rights Council. Rather, in its 12 years of existence, the Council has amassed a decent track record, both of investigating specific human rights abuses and global norm setting.

In 2011, with strong support from the United States, the Human Rights Council passed an historic resolution that equated LGBT rights with human rights. This had the effect of mainstreaming LGBT rights into the broader UN human rights portfolio. This included giving then-secretary general Ban Ki Moon the breathing room he needed to more robustly engage in LGBT rights issues, even though some more conservative UN member states remained adamantly opposed. (In 2015, he was awarded the Harvey Milk award for his work on behalf of LGBT rights).

The Human Rights Council has also been a platform for constructive engagement on issues that are otherwise paralyzed by big power rivalries at the Security Council. Syria is a good example here. With the Security Council unable to take any action, the Human Rights Council approved creating a commission of inquiry to document human rights abuses committed in the context of the Syria conflict. Every six months, the Commission of Inquiry releases a new report detailing abuses and identifying perpetrators. This obviously has not stopped the slaughter in Syria–but it has created robust documentary evidence of crimes committed in Syria that could be used in future war crimes proceedings. It is also a demonstration that, despite inaction at the Security Council, the United Nations can still be a player on these key global issues.

The Council has also routinely shined a spotlight on neglected human rights issues, such as regime abuses against its citizens in Eritrea and Belarus. It is the only UN entity that consistently maintains focus on human rights abuses by regimes that are not on the radar of the news media or are of particular interest to powerful forces at the UN.  In these situations it does its job–and does its job well. Again, to quote the CFR report:

“Two successive terms of U.S. membership on the UN Human Rights Council (UNHRC), before the mandatory one-year hiatus, have improved the body’s performance in several ways. These improvements include strengthening the council’s commitment to country-level action, fortifying norms that underpin fundamental freedoms and assist at-risk populations, rebalancing the human rights agenda, and building momentum for the defense of civil society.”

To the extent that US withdrawal from the council serves to undermine the council itself, the people who will suffer will end up being Eritreans and Belarusians who are being oppressed by their government.

US and International Human Rights Groups Do Not Support this Move

The American decision to leave the Human Rights Council is being criticized by human rights and humanitarian groups that have long standing commitments to upholding human dignity around the world.

Forfeiting the U.S. seat on the UN Human Rights Council only serves to empower actors on the Council, like Russia and China, that do not share American values on the preeminence of universal human rights – an assertion backed up by evidence from the 2006 U.S. Council withdrawal. Further, no other likeminded country seeking to occupy the United States’ former seat can realistically match Washington’s global diplomatic and political footprint. In short, without strategic U.S. engagement at the Council as a member, the U.S. loses a platform to influence the course of human rights globally for the better and the victims of human rights abuse globally will fall prey to the machinations of governments that will take advantage of this strategic vacuum.

These groups work day in, day out to promote human rights around the world and they argue that the US withdrawal is harmful to their cause.

That is because this decision is antithetical to US interests and serves to undermine an already fragile global human rights regime. The United States doesn’t stand to gain much from leaving the Human Rights Council and the Trump administration is committing yet another unforced error by ceding this platform for upholding human rights around the world.

Human rights are not a luxury