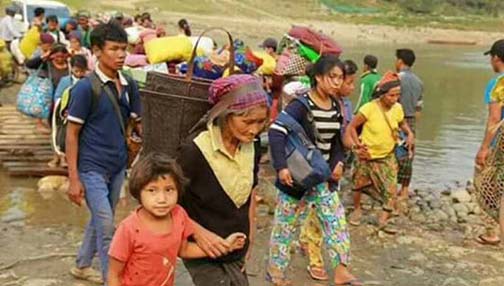 Today is the 7th anniversary of renewed war in the Kachin region. On June 9, 2011, the war between the Kachin Independence Army (KIA) and the Burma Army (BA) was reignited after a combined force of the BA’s 437th Light Infantry Regiment and 348th Light Infantry Regiment troops launched an attack on the KIA 15th Battalion’s Bumsan post in Sanggang, located near Taping hydropower plant in Momauk Township. It effectively ended the 17-year ceasefire that had been in place since 1994.

Lance Corporal Gawmo Chang Ying, a KIO liason officer in Sanggang was arrested, tortured and killed by BA troops. At the request of the KIO’s Central Committee, Chang Ying’s body was returned to KIA troops on June 10, 2011, and it was found that he had suffered multiple bruises, stab wounds, and bayonet wounds. Chang Ying had reportedly been shot three times even after death.

The KIO requested the BA to stop sending troops and transporting military hardware to the Kachin frontlines following the Sanggang incident, but the BA ignored the KIO’s request. On June 12, 2011, the KIO Central Committee gave orders for KIA forces to open fire on BA troops as a defensive measure. According to KIO official sources and local frontline updates, there have been 3862 clashes between the two sides, which involvedsoldier on soldier combat, artillery and landmine attacks, from June 11, 2011 to May 31, 2018. 1. An estimated 124 innocent civilians have been tortured, killed by BA forces.

3. About 300 innocent civilians have been rounded up and imprisoned.

4. 78 received permanent injuries, as a result of suffering torture at the hand of BA troops.

It is likely that there are many more unreported cases of torture, rape and imprisonment. The following are the numbers KLN obtained from KIO official sources, and local aid organizations: Kachin local faith-based and aid organizations report that about 130,000 villagers and residents have been displaced since the renewed war began in June 2011. They are living in 165 camps in areas controlled by both the Burmese government and the KIO.

In 2018 alone, over 6,000 persons were internally displaced and forced to move to IDP camps. KLN has obtained some updates on the latest IDP situation. The following are the IDPs and camps added in 2017-18 due to BA offensives in central Kachin state. To date, 405 villages have been damaged in the Kachin region since the renewed war began in June 2011. From Jan to May 2018, about 50 villages were abandoned and the villagers forced to live in IDPs camps and relatives’ houses. The following is the latest list of abandoned villages in Danai, Sumprabum, Kamaing, Mogaung and Hpakant townships in 2018. Deaths and Injuries from landmines in 2018

The following is a list of civilians killed or injured in 2018.