Blog
You are here: Home / Blog / Resources / Member statements / Statement of the Ta’ang Community Based Organizations on Serious Human R... 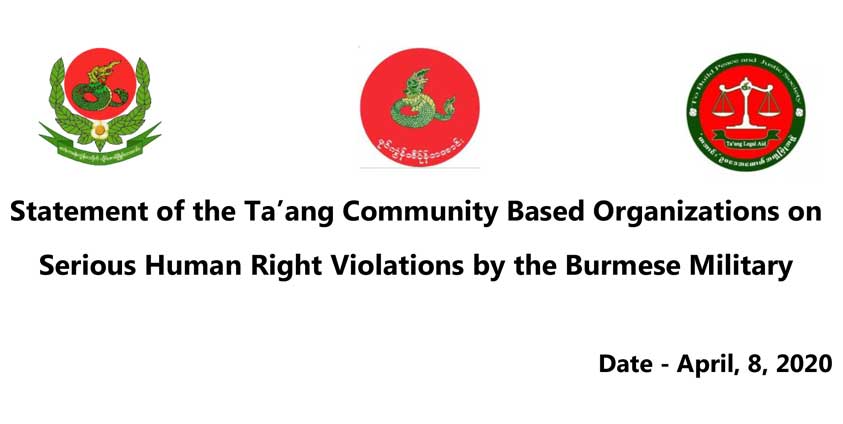 Date – April, 8, 2020
1. While the coronavirus pandemic is overwhelming the world, the Burma Army is committing war crimes with impunity in Northern Shan State,
including arbitrary arrest, torture and killing of innocent villagers. Ta’ang communities are now being threatened by both the pandemic
and these serious human right violations.
2. In March 2020 alone, there have been 18 cases of arbitrary arrest, torture, and forced portering – including one case when a villager used
as a human shield stepped on a land mine and died at the front line.
(a) On 25 March, 2020, 7 villagers of Pan Tin village, Moemeik Township, including a woman, chairman and secretary, were
arrested without any reason by troops of Burma Army IB 276, and they have not met with their family members till today. In addition,
the troops seized and destroyed villagers’ property, including phones. The Burma Army also checked the community, house by
house, without any reason.
(b)On 29 March, 2020, around 8 pm, troops of Burma Army, IB 251, forced the secretary and chairman of Moe Nwae village, Mantong
Township, in the Ta-ang self-administered zone, to be porters, leading the troops as human shields. While they were portering, the
chairman, U Kyaw Sar, 38 years old, stepped on a landmine and died immediately. The Burma Army provided about 3,000,000 Kyats
(2,300 USD) as compensation to his family.
(c) On 18 March, 2020, troops of Burma Army ID 99 also arrested without any reason ten villagers from Kyak Mann Village, Tarmonye
Sub-township, Kutkhai Township, and tortured them. The previous day, on 17 March, 2020, one villager from Saikhar village was also
arrested and tortured, then detained for 2 nights at the Monsi Burmese military camp.

3. Ta’ang community based organizations urge the Burma Army to release all of the detained villagers unconditionally. We also urge to
seek justice for the villager who died at the front line. We urge the Burmese government to hold the Burma Army accountable for their
war crimes, and immediately end all human rights violations in Ta’ang areas.

The Burma Army Must Immediately Halt Fighting & Adhere to A Global Ceasefire...
Scroll to top