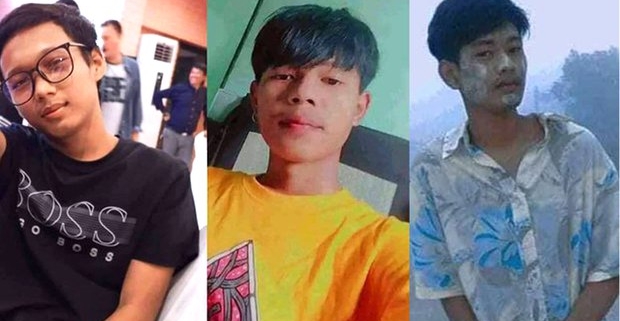 Some locals say the group may have been planting a mine for a resistance group.

Six Burmese high school students were killed in an explosion at around 5 p.m. on Saturday at a house in Yangon’s Kyimyindaing township.

They were aged between 16 and 17 and were all boycotting classes organized by the military council.

Five of them were identified as Aye Min Myat, Thae Naing Min, Kyaw Zaw Lin, Moe Hein Kyaw and Than Htike San. The other’s identity is not yet known.

A local, who did not wish to be named for safety reasons, said the blast happened near a drink shop on Pont Pyoe Yae street around 100 yards (91 meters) from the local police station.

“The children went to play football at around 4.30 p.m. There is a shop called Phyoe Wai where they gather to play. The shop sells Kaung Yae [a local alcohol] and cold drinks.”

“The parents were taken to see the bodies on Saturday and they are trying to get them back.”

Another local told RFA she had watched the children grow up.

“I don’t know if they were UG [underground] or not,” the local said.

“I saw their scattered bodies picked up and taken away in zipped bags. The families have not seen the children and nobody could go near the incident. The mine explosion even shook my home. Locals don’t know who planted the mine,” she told RFA.

Nearly 100 junta troops arrived after the blast in vehicles and boats. Another anonymous local said the troops took the bodies away for investigation. Locals said Phyoe Wai, the 22-year-old shop owner ran away.

Residents said the street was blocked until Saturday morning and some houses in Set San Ward were searched by troops.

On Saturday some residents from the ward were arrested, but the exact number is not yet known, a resident told RFA.

A recent blast in the area was caused by a bomb being tested in a school by members of the Pyu Saw Htee, a pro-government militia, but a leader of the local Dark Shadow anti-junta group, Chan Nyein Thu, said some of the young men who died in this blast may have been helping anti-government forces.

“I knew one of the young men in the group and in the past he had asked for mine-making materials so he seems to have been helping out. Some people said he was a Phu [a member of Pyu Saw Htee] when his picture appeared online. I posted it back on my account saying he is not Pyu, but UG,” he said.

“I have tested [a mine] and it accidentally exploded. If a mine explodes while being tested, only two things can happen, losing your life or being arrested,”, the Dark Shadow leader told RFA.

On April 27, junta troops arrested and shot at 14 young members of Dark Shadow in Kyimyindaing, killing one man.

“UG are hiding and carrying out their moves and have to set the mines in rooms,” he said. “If they have to plant a mine, the ammunition is inside and there are models of how to put it in a mine. But they only use materials available in their neighborhoods so there are accidental blasts and some mines can’t be touched when they are activated. Some mines also need to be deactivated. In other words, inadequate materials in production have become dangerous for them.”

RFA has not been able to verify whether any of the six youths was UG or whether they were planting a mine.

Workers from hotbeds of resistance to Myanmar junta say they face discrimin...
Scroll to top