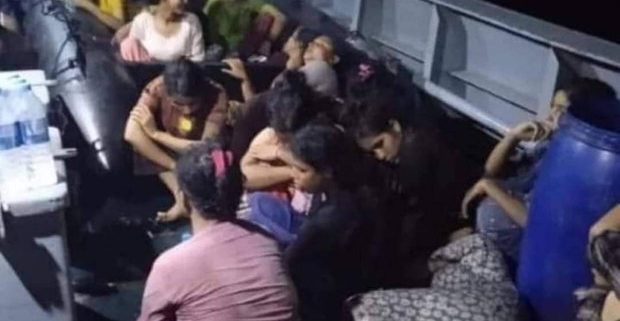 There were 59 survivors although a baby has reportedly since died.

Six bodies have been discovered along with 59 ethnic Rohingya survivors on a boat floating near an island off Myanmar’s Ayeyarwady delta region.

Local residents told RFA the Coast Guard went to stop the boat on Monday after reports it had been drifting for several days in the sea near Gayatgyi island, which lies just off the coast.

One of the residents, who declined to be named for safety reasons, said that the Myanmar navy from nearby Ka Don was sent to arrest them.

“There were dead bodies on the boat. It seems the boat’s engine broke down and it floated in the sea for a long time and people died of starvation,” the resident said.

Residents said three men and three women had died, and there were 59 survivors. They said a child from the boat died after survivors were taken to the police station for Bogale township, but RFA could not verify this independently.

RFA called Maung Than, who is minister of social affairs and the spokesman for Ayeyarwady regional military council, but calls went unanswered on Wednesday.

It was not immediately clear where the boat had departed from and what punitive action may be taken against the surviving Rohingyas. In the past, Rohingya migrants have faced between three and six months in prison under Myanmar’s immigration law.

More than a million Rohingya Muslims used to live in the Buthidaung and Maungdaw areas on the northern tip of Rakhine State. Some 740,000 fled to Bangladesh to escape army scorched-earth operations in 2017 and live in squalid refugee camps there.

Of those that remained, hundreds were killed, including women and children and many villages were burned down.

The International Court of Justice in The Hague, Netherlands, is investigating the military for genocide in a case brought by Gambia. The U.S. State Department has already labelled Myanmar’s actions as genocide.

Even though five years have passed since that crackdown, stateless Rohingya refugees are no closer to returning to Myanmar.

Hundreds of thousands more Rohingya remain in Myanmar’s western Rakhine State, where their movements are more restricted.  Zarni Soe, a human rights activist based in the state, told RFA last week that their situation may worsen amid renewed fighting between the Arakan Army and junta troops in the north of the state.