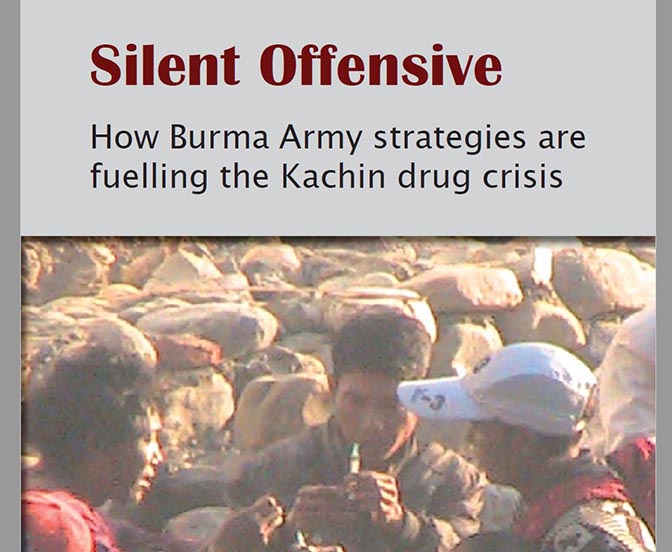 This report, based on interviews with Kachin drug users, their family members, drug sellers, and community leaders in eight townships of northern Burma, paints a disturbing picture of the drug crisis in Kachin areas. It shows how the renewed conflict against the Kachin Independence Army (KIA) since June 2011 is fuelling drug production and worsening existing drug abuse among Kachin communities.

A key factor causing increased drug production is the Burmese government’s policy of allowing its local militia to grow opium, and produce heroin and other drugs, in exchange for fighting against the KIA. As the Burma Army and its allies have progressively seized control of Kachin areas, drug production has been increasing.

In Kachin State, the main opium growing areas now are in Chipwi and Waingmaw townships, under the Burma Army and its Border Guard Forces 1001, 1002, 1003 and 1004, led by Zakhung Ting Ying, formerly a Kachin ceasefire group leader and now an MP in Burma’s National Assembly.

However, the UNODC does not identify the Chipwi area as a “high-risk” opium growing area. Only Waingmaw and Tanai in Kachin State were designated “high-risk” and included in the UNODC 2013 opium survey. This throws into doubt the UNODC’s estimate of a 10% reduction in opium cultivation in Kachin State from 2012.

In Kachin-populated regions of northern Shan State, the main opium growing areas are in Muse District under the control of the Burma Army and thirteen government People’s Militia Forces, three of whose leaders are MPs in the Shan State Assembly. The KIA had formerly enforced opium bans in some of these areas.

Thousands of acres of poppy fields are being cultivated in these government militia areas, and are being taxed not only by the militia but by other government officials. Despite the taxes, increased numbers of villagers are turning to opium cultivation, as the conflict has prevented them growing other crops, and has blocked transport and markets. This includes displaced villagers, who risk travelling back to their farms to plant opium, or else work as laborers on others’ fields.

Not only opium growing, but also heroin refining and methamphetamine production, is taking place with impunity in government militia-controlled areas. These drugs are flooding into Kachin communities, worsening existing problems of drug abuse and addiction not only in poppy growing areas, but also in towns, mining sites, and along trading routes.

Although opium has been grown and used traditionally by Kachin villagers for decades, there are now much higher rates of opium use among poppy farming communities than in the past. In some opium growing villages, children as young as five are smoking opium. IDPs resorting to laboring on poppy farms are also becoming addicted.

In and around urban areas, such as Myitkyina, Bhamo and Lashio, where heroin is cheaper than opium, and easily available, there are alarming rates of heroin use among youth. It is estimated that about a third of students at Myitkyina and Bhamo universities are injecting drug users.

Heroin use is also rampant in mining areas. Many Kachin men, young and old, migrate from towns and villages to find work in jade and gold mines, where the harsh working conditions and isolation encourage drug use. Local residents estimate that 90% of workers in Hpakant jade mines are drug users. Drugs remain readily available in Hpakant despite the conflict, which has disrupted large-scale mining since 2012.

Drug use is widespread at trading hubs and along transport routes to the China border. This includes not only opium and heroin, but increasingly methamphetamines or “yama.” At a timber trading site near Bhamo, it was estimated that 50% of youth were injecting drug users. Drivers on the Muse-Mandalay road, the main trading route to China, commonly use both heroin and “yama”. At some petrol stations in Muse, syringes and distilled water are given instead of small change.

Although increasing numbers of women, particularly in trading  areas, are taking “yama”, the majority of Kachin drug users are male. Gender inequality in Kachin society heightens the problems this creates for women family members. Already bearing the burden of all domestic work, women struggle to survive when husbands, sons and fathers not only stop providing income to the family, but sell off family possessions and even steal to feed their drug habit. Women have to look after drug users when they fall ill, and suffer verbal and physical abuse.

Some wives of drug users have had to travel to find work in China to support their families. As described by KWAT in earlier reports, Kachin women migrating to China are highly vulnerable to human trafficking. Some women interviewed by KWAT said they started using drugs when in China.

Poverty, exacerbated by the conflict, is also driving women to turn to drug dealing. One woman from Bhamo who could no longer farm due to land-mines planted in her fields, started selling “yama” to pay for her son’s medical costs. Another woman started selling heroin to pay for hospital costs of her husband, a heroin user.

Due to the government’s lack of political will to crack down on the drug problem, and widespread corruption, there is no strict law enforcement against drug dealing. Only small-time dealers and users are arrested. Impoverished women, who could not afford bribes to secure their release, have ended up with long prison sentences. KWAT documented three cases of pregnant women being sentenced for drug use and/ or dealing for terms ranging from 4 to 18 years; all gave birth in prison.

International NGOs responding to the drug issue are mainly supporting harm reduction programs, including needle exchanges. Local people have mixed feelings about this, as they worry that distribution of needles encourages drug abuse.

Many communities are therefore developing their own programs to address the growing problem of drug abuse. In towns, a number of local church groups have set up rehabilitation centres, and in rural areas, community groups have also started mobilizing against drugs.

Women are playing a leading role in these community efforts. Two years ago, a Kachin nurse called Esther set up a community group to campaign against drug abuse in Mong Baw, Muse District. Her group, which has about 200 members, holds public events in over 20 villages to raise awareness about the dangers of drug use, and helps users access medical care and rehabilitation services. They also pressure dealers to give up selling drugs by charging fines and handing them over to the police. The work has had some success – at least 12 dealers have been persuaded to stop selling — but is also extremely dangerous. Esther has received death threats, and a bomb has been placed at her home.

KWAT is concerned that the international donor community is not focusing on the role of the war, and particularly the anti-insurgency policies of the government, in fuelling the drug problem in Burma. Donors are increasingly providing aid directly to the government, including for counter-narcotics activities. However, this is simply emboldening Burma’s rulers to continue military operations against the ethnic peoples, including the Kachin, thereby perpetuating the war, and perpetuating the drug problem.

KWAT therefore urges all stakeholders, including international donors, to focus on finding a just, negotiated political settlement to the conflict as an urgent priority in tackling the drug problem in Burma.