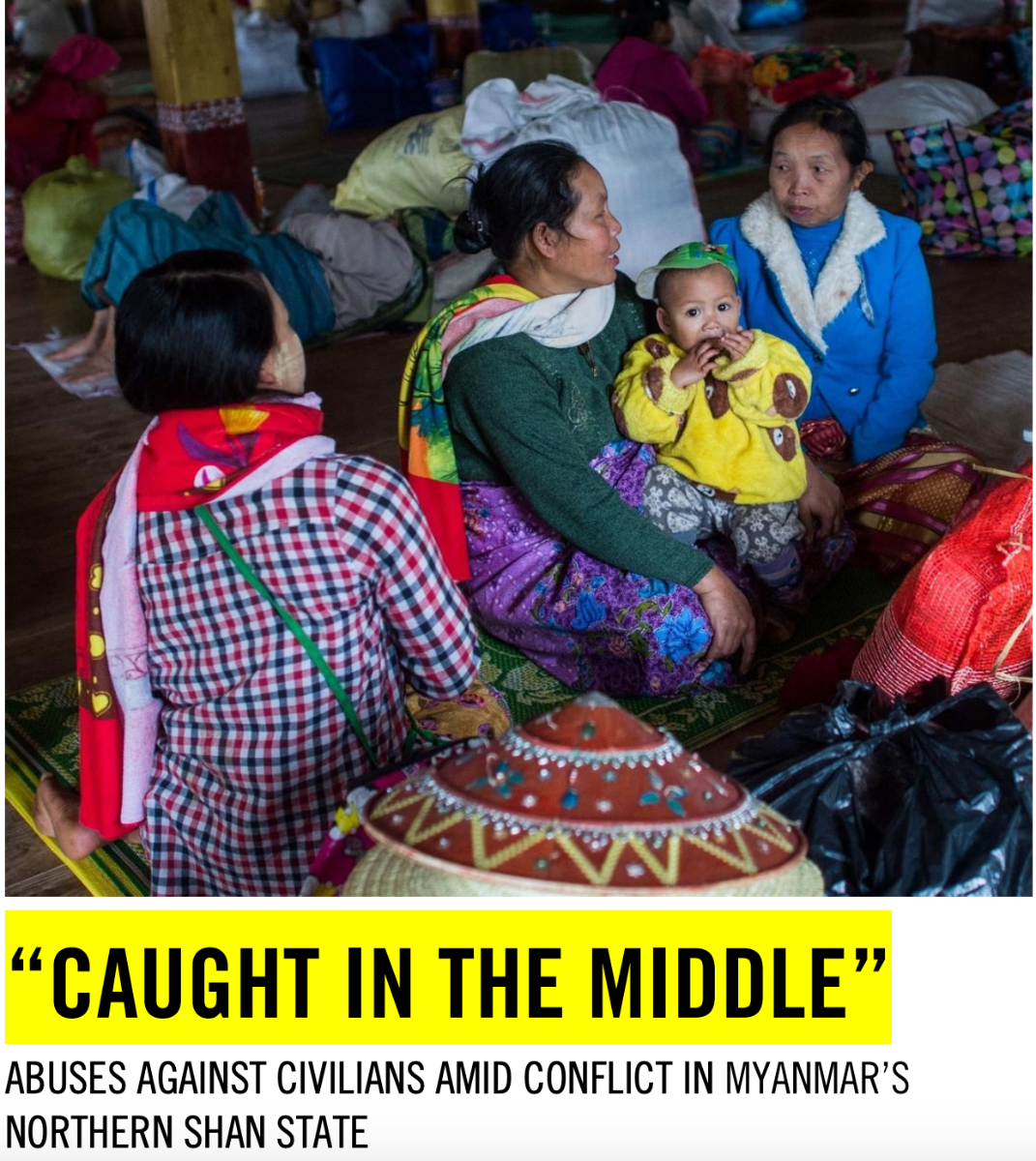 A worrying trend of disregard for human rights continued in October with civilian casualties mounting; predominantly in Rakhine State where tensions between the Burma Army and Arakan Army remain tense.  Several villages have been under a 9 PM to 5 AM curfew since April 2019 as conflict has intensified with villagers fleeing their communities to monasteries to seek temporary refuge.

According to the Rakhine Ethnic Congress, over 60,000 people have been displaced by the clashes since January 2019. This has prompted initiatives such as the Rakhine State Parliament approving a proposal urging the Rakhine State government to form an investigation committee to probe civilian deaths caused by the fighting. Fighting is particularly active in northern Rakhine townships including Kyauktaw, Ponnagyun, Rathedaung, Buthidaung, Mrauk-U, Minbya and Myebon.

Landmines continue to threaten livelihoods and the overall security of civilians in northern Shan State. This month one civilian died instantly and another seriously injured when a mortar exploded while they were working on their tea plantation in Kyaukme Township. Two Buddhist monks were also treated at a hospital when their motorbike hit a landmine in northern Shan State. The Burma Army and ethnic armed organizations continue to refute responsibility when civilians are killed or injured. Burma has not acceded to the Mine Ban Treaty, despite an initiative launched by the International Campaign to Ban Landmines in 2003. Last year, as an observer at the Mine Ban Treaty’s Sixteenth Meeting of State Parties, Ambassador U San Lwin claimed, ‘the Myanmar Armed Forces is no longer using the landmines while safeguarding the life and property of its people in internal conflicts.’

A timely report released by Amnesty International described the human-rights abuses committed in Shan State as ‘relentless and ruthless’.  The report also appeals to the United Nations Security Council to refer Burma to the International Criminal Court. In light of the intensifying conflict, Shan State human-rights defenders reported being ‘threatened’ over Facebook for their efforts in opposing social matters.

Isolated communities remain trapped due to fighting and are in need of support and resources. Various relief agencies are attempting to support them including international and local response teams. The disregard for human-rights abuses by security forces remains concerning and yet peace talks between the National Reconciliation and Peace Center with the Northern Alliance were again delayed. Comments from the United Nations Special Rapporteur to Burma, Yanghee Lee, were timely in which she reinforced strong calls for targeted sanctions.  Kachin IDPs specifically expressed safety and security concerns about ceasefire speculation between the Kachin Independence Organization (KIO) and the Burma Army.  The fears prompted one civilian from Mali Yang IDP camp resident, Sara Seng Hkawng to ask, “I want to ask, do we need to run again?”

Civilians Injured by Shelling in Rakhine

Five civilians were injured  by mortar shelling from the Burma Navy in Rakhine State’s Kyauktaw Township, in what the military called “an exchange of gunfire with Arakan Army troops.” Victims included a monk and a 13-year old novice monk who were seriously injured.

U Soe Naing, a 40-year-old villager in Rakhine was shot by the Burma Army for unknown reasons while riding his motorcycle to Kyauktaw bus-station.

In a related case, a 60-year-old male resident of Sin The Pyin village in Buthidaung Township was on his way to go fishing with four other villagers when he was fatally shot by soldiers stationed on a hill near the village. The victim was shot in the head and died on the way to Buthidaung Township Hospital.

In Kyauktan village in Rakhine State’s Rathedaung township, a 70-year-old woman died of a heart-attack when trapped in her village amidst ongoing clashes. Elderly civilians are one of the most at-risk groups in conflict settings.

IDPs who fled fighting between the Burma Army and the AA in northern Rakhine have taken refuge at Upper Myat Lay camp. Many fleeing feel there is ‘no hope of returning home.’ In a recent case, two children drowned while they were  running from violence in Mrauk-U Township, Rakhine State.

Rockets fired during clashes between the Burma Army and the AA in Rakhine State’s Kyauktaw Township resulted in the injury of a 70-year-old man and a younger man in a nearby village in artillery explosions.

Community leaders are continuing to put pressure on the authorities following the death of a 51-year-old Kachin IDP woman, Nan Htang. Kachin communities have accused the Burma Army of being involved in the killing, which took place in July 2019.

In northern Shan, a high risk area for landmines, a mortar blast hit two civilians. One died instantly and another sustained serious injuries and was being treated at a hospital in Kyaukme Township. Two monks were also injured in a roadside landmine in northern Shan.

A mother and her daughter both sustained injuries when fighting between the TNLA and the Burma Army erupted in Kutkai Township, northern Shan State.

Karen Activists Charged
Three Karen activists, Naw Ohn Hla, Saw Albert Cho and Sa Thein Zaw Min were sentenced to 15 days in prison for not complying with an order to delete the word “martyr” from this year’s commemoration. The Karen Human Rights Group released a statement condemning the arrests, and also criticized the Peaceful Assembly and Peaceful Procession Law which has been ‘repeatedly used to arbitrarily detain and arrest organisers of peaceful expression in Burma.’

In a related incident, police in Kyauktada Township opened a case of unlawful assembly against three female activists for organizing a protest at a courthouse in Yangon in support of the charged Karen activists.

Three girls were rescued from forced prostitution after residents of Mya Yee Nandar Apartments in Chanmyathazi Township found letters from the young women asked to be rescued from the locked apartment that they were being kept in. On the same day, five other women were rescued before they were trafficked to China as brides.

The escalation of human-rights abuses across Burma continues to unfairly undermine the safety and security of civilians. Burma’s leaders must take seriously their commitment to a peaceful democratic transition by holding perpetrators accountable and adopting transitional justice mechanisms to signal a way forward that is truly reflective of the needs of the people.

A new briefing paper was released by the International Commission of Jurists (ICJ) on October 21 that ‘calls upon Myanmar authorities to ensure that the right to freedom of thought, conscience, religion or belief and respect for culture and tradition are never used as pretexts to justify discrimination and violence in the country.’

Read more here in English. Available in Burmese is a Strategic Litigation Handbook for Myanmar.

ICJ also held a workshop on the investigation of potentially unlawful deaths in Nay Pyi Taw with 15 prosecutors and ten members of the Myanmar Police Force. The workshop was timely given the five-year anniversary of journalist, Ko Par Gyi, who was killed in custody – highlighting a need to reform the 1950 laws that perpetuates military impunity.

The Global Justice Center reported on coverage from Australian media outlet, the Conversation, which suggested that ‘Myanmar might finally be held accountable for genocide, but the court case must recognise sexual violence.’ The article called for countries to take a stronger stance and interest in reducing sexual and gender-based violence – which remains at the core of the Burma Army’s genocidal campaign.

The International Criminal Court released a 32-page document on the Situation in the People’s Republic of Bangladesh / Republic of the Union of Myanmar with representations of victims from Tula Toli – who are 86 individuals living in refugee camps in Cox’s Bazar. They were all forcibly deported from Burma to Bangladesh under extreme circumstances and exposure to violence.

Human Rights Watch (HRW) called on the Japanese government to ‘publicly hold Myanmar to account for military atrocities committed against Rohingya and other ethnic minorities.’ Deputy Asia Director at HRW noted Japan’s recent re-election to the UN-Human Rights Council and encourage the government to improve its human rights foreign policy, including by calling on Japanese companies not to contribute to rights violations in Myanmar.’

Meanwhile, in an encouraging step forward for universities across Burma, human rights law is now a compulsory subject for third-year law and international relations students. The decision comes as part of an agreement between the governments of Denmark and Burma to teach human rights at universities in the country.