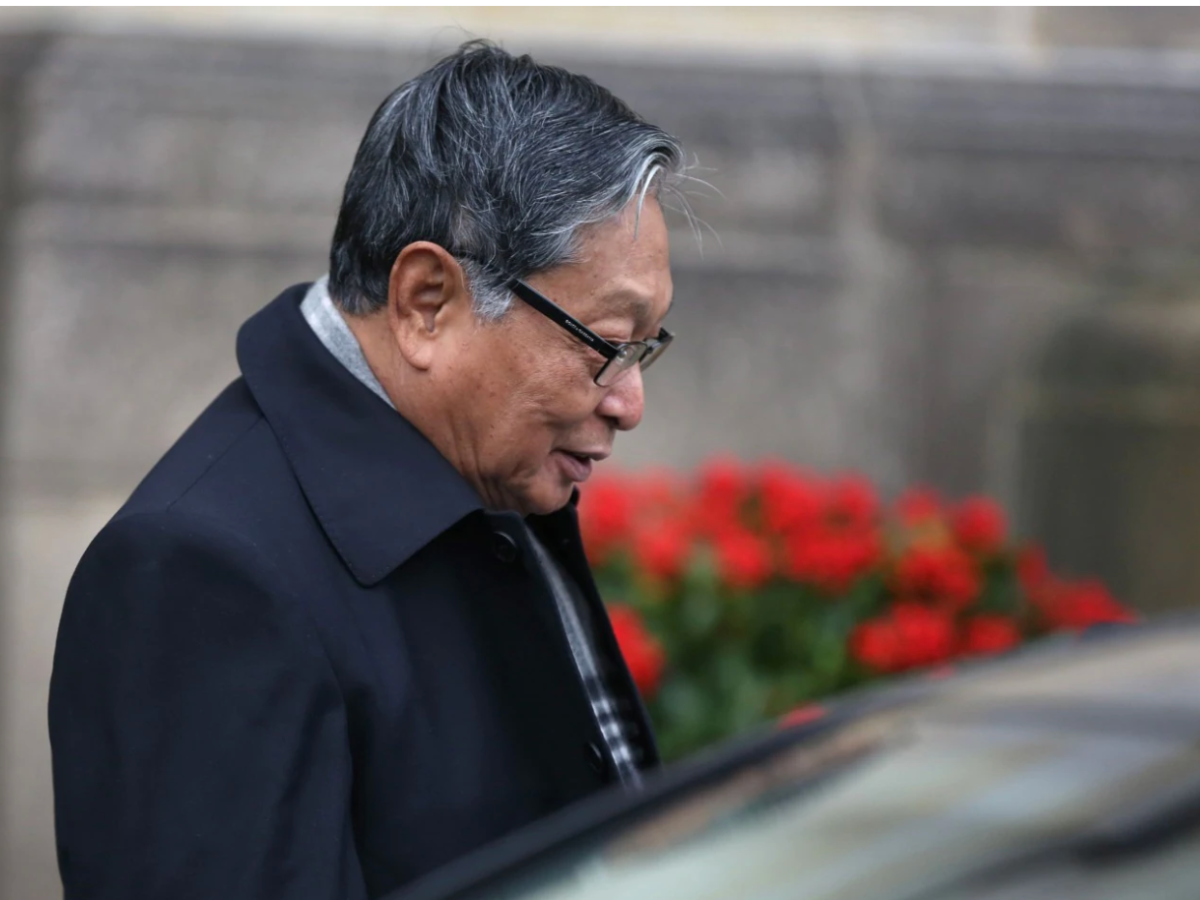 In a series of events expected to set the tone for the year, 2020 has so far shown no signs of the conflict abating, particularly in northern Shan and Rakhine States. A short video released by the Shan Human Rights Foundation demonstrated how the ‘4 cuts’ strategy used by the Burma Army for decades, continues to devastate communities impacted by clearance operations. In November 2020, Burma is set to be reviewed by the Human Rights Council at the Universal Periodic Review where it will be evaluated on its commitment to promote and uphold basic human rights. International protection mechanisms including invoking Right to Protect norms and humanitarian law will put pressure on power-holders who govern and rule with divisive tactics that fail survivors. While it is ultimately the decision of the country to accept or acknowledge the recommendations put forward, the integrity of victims depends on Burma taking their commitments seriously.

The end of January also marked the two-year anniversary of the death of prominent lawyer, U Ko Ni, who was murdered in broad daylight outside of Yangon International Airport. In the time that has passed since, there have been long and tireless calls for justice. A timeline from the Irrawaddy details the trial proceedings to date.

Commitments to the Peace Process

Meanwhile, a speech by Daw Aung San Suu Kyi urged commitment to Burma’s faltering and long-delayed peace process by calling for all negotiating parties to put the country first. Members of the Nationwide Ceasefire Agreement (NCA) met in Chiang Mai as the members leadership, notably General Yawd Serk, leader of the Restoration Council of Shan State encouraged members to continue working towards the goal of ‘building a federal Union.’ The Karen National Union has also rejoined the formal talks following suspending their participation for over a year. However, talks between government negotiators and representations of the 10-signees were delayed again until February. Much of the power in the negotiations remains entrenched in the control of the Burma Army through the 2008-Constitution. However, in a progressive step forward, more than half of Burma’s lawmakers have jointly proposed 114 amendments to the Constitution. If approved, the power of the military and commander-in-chief would be reduced significantly.

Continued Decline of Freedom of Expression

Freedom of expression continued to decline as youth-led rights organization, Athan, revealed that the military has filed nearly 50-lawsuits against journalists. An infographic on the Burma Army’s complaints violating freedom of expression under the current government can be found here.  In contrast, doubts to police reform were also echoed in two editorials from the Irrawaddy and Frontier Myanmar, both which questioned the loyalty of the police to the elected government.

Perhaps most significantly this month, the International Court of Justice (ICJ) ordered Burma to prevent genocide against the Rohingya by implementing emergency measures to protect Rohingya Muslims against violence. Prior to the verdict, 103 civil-society organizations released a statement welcoming long overdue repercussions against the Burma Army. Additionally, several human rights organizations welcomed the ICJ ruling including the International Karen Organization and the Kachin National Organization as well as 79 Burma organizations. The fixing of time-limits for the initial pleadings, which require Burma’s compliance, were released at the end of January.

The judgement was a direct blow to the Independent Commission of Enquiry (ICOE) which was the government led investigation tasked with scrutinizing human-rights abuses following the 2016 and 2017 attacks by the Arakan Rohingya Salvation Army (ARSA). The summary findings fed into the widespread belief that Burma’s justice systems are incapable of holding the Burma Army accountable as most of the blame was put on ARSA and even went as far as to state that Muslim villagers were burning their own homes to the ground. The report dismissed evidence of rape, which was another significant slight that many were reminded of during Aung San Suu Kyi’s failure to acknowledge crimes of sexual violence in Rakhine State during the ICJ trial.

Nonetheless, in what was a surprise to few, Burma rejected the ruling by the ICJ and are maintaining that they were responding to State threats undermined by Rohingya Muslim radical insurgencies. A stunning revelation by Frontier Myanmar showed that a staff member of ICOE also served on the legal team defending Burma against genocide allegations at the ICJ, in what suggests a serious conflict of interest.

The United Nations Special Rapporteur on Human Rights in Myanmar, Yanghee Lee, gave her end of mission press conference where she addressed a variety of issues, in which she offered concluding remarks stating: “Burma has the ways and means to change course from slipping back to dark, pre-transition days and to move forward as an inclusive, democratic, rights-respecting free nation.” 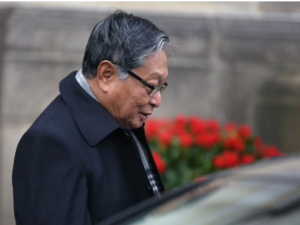 Photo:
The minister for the office of the state counselor of Myanmar, Kyaw Tint Swe, leaves the ICJ on Jan. 23.
Credit: Eva Plevier/Reuters

Coupled with an information blackout, civilian safety is compromised in conflict areas with regular explosions and landmines as clashes between the Arakan Army and the Burma Army. Instability has continued to threaten their safety and well-being.

Civilians forced to flee unstable conditions. Those caught in the cross-fire have been killed, injured or displaced.

Explosion Kills Children, Injures Others
Four Rohingya children died and six civilians were injured at the beginning of the month in a mine explosion in Batuhidaung township in an incident that left a community distraught at the loss of lives claimed.

Villager Shot Dead at a Police Checkpoint
One man was shot dead and another arrested in Mrauk-U during a checkpoint with the Burma Army. In a statement, the Burma Army claimed they had fired warning shots when the civilian failed to stop his motorbike.

Eight Civilians Injured in Mine Explosion
Eight people, including children under 12-years old, were injured following a landmine explosion in Rakhine. Landmines are regularly claiming the lives of victims who are traveling, or tending to their fields.

IDPs Forced to Leave Camp
The Burma Army continued to fuel tensions by forcing IDPs from Myebon township to leave their camp where more than 500 civilians were taking refuge from the fighting between the Arakan Army.

Two Women killed, Others Injured by Artillery Firing
During more clashes between the Burma Army and the Arakan Army, two Rohingya women were killed and seven others were injured after an artillery shell struck villages in Buthidaung Township.

Ongoing violence in Rakhine State has experts estimating that as many as
100 000 people have been forcibly displaced by the clashes between the Burma Army and Arakan Army since 2019.

Administrator Shot Twice While Traveling Home
A local administrator in northern Shan survived but sustained serious injuries when he was shot twice while traveling home from work by two armed assailants. Kyaukme remains an active conflict area where clashes between the RCSS and TNLA take place regularly.

TNLA Soldier Kills School Teacher in Northern Shan
The TNLA has committed to taking action against a member who killed a schoolteacher, over a personal issue when allegedly she refused to marry him.

IDP Camp Closure Looms as Villagers Raise Concerns
At the beginning of the month, a national-level policy discussion on the resettlement of Kachin IDPs was held where government representatives continue to advocate closing the IDP camp – despite concerns from civil society that IDPs are worried about not being able to reclaim land that was left behind. While members of the Burmese government insist that closures will happen “in line with international norms,” those working with IDPs are concerned nonetheless. There are approximately 100 000 IDPs as a result of armed conflict in Kachin and northern Shan State.

Leader of Kachin Literature and Culture Fined for Kachin State Protest
After the Kachin State government announced they would recognize the Jinghpaw Mungdaw Nhtoi only in Burmese, many protested. The man in charge of the Kachin Literature and Culture Association joined the protest and was fined 30,000 kyat (USD $20). Another staff member was also charged for violating Article 19 of the Peaceful Assembly and Demonstrations Act. The two men believe they were targeted specifically. 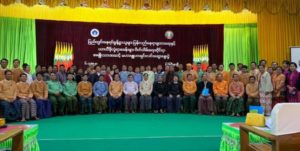 Activists Lose Appeal in Treason Case
A final appeal for Rakhine activists in a treason case was rejected by the Union Supreme Court. The Rakhine State government sued well-known lawmaker, Dr Aye Maung and writer, Wai Hin Aung under Article 122 and 5050(b) of the Penal Code and Article 17(1) and (2) of the Unlawful Associations Act after they gave speeches in 2018 stating that the NLD was treating Rakhine people ‘like slaves.’

Justice Sought Five-Years on for Brutal Rape & Murder of Kachin Teachers
Following the brutal rape and murder of the Kachin teachers in northern Shan State five years ago, the Kachin Baptist Convention remains determined to bring justice against the perpetrators. “We are hurt that the perpetrators remain free, but we expect to uncover their identities soon,” said Rev. Lagang Ze Hkawng, assistant secretary of the KBC, for which the two victims were volunteer teachers.

Young Girls Missing Likely Trafficked into China
Two young Kachin girls from northern Shan State who have been missing for two-months have likely been trafficked into China. Despite the Kachin Literature and Culture Organization’s attempts to open a case against the four detainees who allegedly transported the girls into China, the police rejected their appeal based on a lack of strong evidence.

In response to the ICJ verdict, there has been a series of explainers on what the ruling means. Some good points of reference can be found below:

The top UN court ordered Myanmar to protect the Rohingya. An expert explains what it means
By: VOX

International Accountability Mechanisms for Myanmar Series
By: Asia-Justice and Rights

ALTSEAN Burma also released a timely briefer on what the full implementation of provisional measures will be for people in Burma. It can be downloaded here.

In 2018, ND-Burma affiliate member, Progressive Voice, released a briefing paper in English and Burmese on international accountability mechanisms. It remains relevant and useful.

—
KWAT Releases New Report; Calls for Reforms to Justice
ND-Burma member, the Kachin Women’s Association Thailand (KWAT), released a report on how delays to justice have impacted communities in northern Shan State. The report can be read here.

—
TWO Shares Evidence of Human-Rights Abuses
According to ND-Burma member, the Ta’ang Women’s Organization (TWO), more than 200 residents experienced human rights abuses in seven Ta’ang ethnic-majority townships in Shan State in 2019. The majority of rights abuses targeted civilians through landmines where many were killed or injured. Others were used as guides, tortured, killed or had their homes robbed.

—
AASYC Releases Report on Mrauk-U Massacre
The All Arakan Students’ Youth Congress (AASYC) released a report on the Mrauk-U massacre which took place in January 2018 following the police crackdown in northern Rakhine where seven people died. The report is available in Burmese and can be downloaded here.

—
Press Release from TWU on Documentation Findings
A press release by Tavoyan Women’s Union (TWU), ND-Burma member, which revealed 149 documented human rights abuses over 14 months from November 2018 to December 2019. The majority of cases were domestic violence (92), followed by child-rape (46) and others including killing and human trafficking (11). The press-release can be read in Burmese here.

—
Statement by TSYU Condemns Use of Landmines
ND-Burma member, the Ta’ang Students and Youth Union (TSYU), released a statement on the impacts of landmines on civilians and war weapons in Ta’ang regions. TSYU denounces any use of landmines by armed organisations or the Burma Army. The statement notes several cases of civilians injured or killed while doing activities to sustain their livelihoods. Read the statement in Burmese here.

Woman Recovering in Hospital after Stepping on Landmine in Paletwa Township