At least six children were killed when Myanmar’s military launched air and ground assaults on several villages in Sagaing Region’s Depayin Township during school hours on Friday, according to local sources.

Residents of the area said that the attacks, which targeted the villages of Letyetkone, Thitton, and Nyaung Hla, also resulted in many other casualties. However, details were not available as most of the affected villagers were still in hiding, they said.

Most of the confirmed casualties were children studying at a school in Letyetkone, where junta troops also reportedly held teachers and students hostage before sending them to Ye-U Township, according to a statement released by Myanmar’s shadow National Unity Government (NUG) on Sunday.

Meanwhile, the anti-regime Depayin Township People’s Administration Team said that around 50,000 people living in villages along the western bank of the Muu River were forced to flee after the military used two fighter jets and two helicopters to carry out a series of surprise attacks on Friday.

In a statement, the group added that helicopters were also used to transport junta troops into the area to launch ground attacks.

A resident of the area said that the military aircraft appeared without warning and fired indiscriminately on the villages below.

“They just suddenly came out of nowhere and started shooting. The two helicopters hovered overhead and fired down on us. When the jets passed over us, there was nothing we could do but lie flat on the ground,” he said.

Another resident said the attacks were unexpected because there hadn’t been any recent clashes in the area.

“There hasn’t been any serious fighting around here lately, or any other significant incident. I think they’re trying to clear the way to bring troops in on the ground,” he said.

The military has carried out at least 10 aerial assaults in the area since late last year, when it began to rely heavily on air power to terrorise civilians amid fierce resistance from local defence forces.

“The revolutionary forces are very strong in this township and have a lot of control over the area. That’s why it’s not easy for military columns to travel here,” said the spokesperson for a local resistance group called Depayin Township Brothers.

According to the spokesperson, the timing of the latest attack made it inevitable that children would be killed.

“Many schools are operating in Depayin Township, and they decided to do this during school hours, so of course several children were hit,” he said.

In many other parts of the country under the control of the regime that seized power last year, schools remain closed due to boycotts by parents opposed to the return of military rule.

In its statement, the NUG said that it strongly condemned the “targeted attacks on the schools [as] an inhuman and brutal war crime” and a gross violation of children’s right to education. 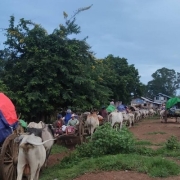 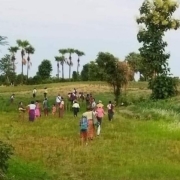 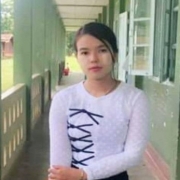 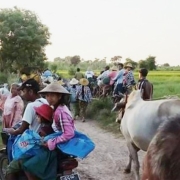 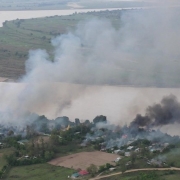