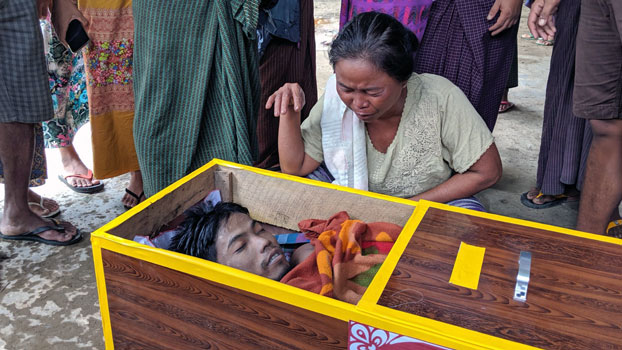 Rights experts are again criticizing the Myanmar military for possible international law violations after reports that another civilian died in custody amid fighting between national forces and the Arakan Army (AA) in western Myanmar’s Rakhine and Chin states.

According to RFA’s reporting, at least 14 persons died of injuries they received while in military or police custody or detention between March and July during the ongoing armed conflict. Seven were from Rathedaung township, six were from Mrauk-U township, and one was from Kyauktaw township.

Government soldiers have been rounding up men and boys in villages close to battles zones on suspicions of supporting the AA, an ethnic Rakhine military that is fighting for greater autonomy in the state, then holding them in detention and interrogating them.

The latest civilian to die at the hands of soldiers was Zaw Win Hlaing from Shwe Tun Phyu village in Mrauk-U township, who was arrested by soldiers on June 19 as he returned home from another village and was subjected to five days of interrogation. After he died on Monday, his mother told RFA’s Myanmar Service that her son said he was beaten with rocks while in custody.

Human rights groups at home and abroad have called on Myanmar forces to stop arresting, detaining, and torturing civilians suspected of being members of the AA or having connections to the rebel army. They say such detentions and deaths in custody by soldiers violate international human rights treaties.

Min Lwin Oo, a Myanmar lawyer with the Asian Human Rights Commission, said the Myanmar military gets away with abusive treatment of civilians by saying that its armed conflicts are internal issues in which other nations should not intervene.

“Claiming them as domestic issues that require no foreign intervention, they have been doing whatever they want,” he said.

“It has not been easy to refer the cases to the ICC [International Criminal Court] because the Tatmadaw [Myanmar military] quickly covered up the [crimes] it had committed,” he added. “But it is likely to face increased pressure and restrictions on the military leadership’s financial flows and arms imports.”

Rights groups and United Nations officials have called for the international tribunal to try military forces responsible for committing suspected acts of genocide against Rohingya Muslims in Rakhine as well as abusing other ethnic minorities in war zones in Kachin and northern Shan states.

Between December 2018 to the present, the Myanmar military has detained more than 90 civilians during the current conflict with the AA in Rakhine state, 36 of whom are still under investigation. Eight others have been released, while 45 have been charged, and three have been sentenced, according to figures released by government forces.

Myanmar military spokesmen Brigadier General Zaw Min Tun said earlier this week that if a person is tortured by troops, he or she can report it to the government’s information team which will set up an investigation group to look into the matter.

Myanmar is not a signatory of the United Nations Convention against Torture (UNCAT) that 170 other countries have signed, though the Myanmar National Human Rights Commission (MNHRC) has recommended that President Win Myint join the accord, said commission member Tin May Htun.

“More evidence will come out as the military violates more rights abuses,” said Nickey Diamond, a Myanmar human rights specialist at Fortify Rights. “The international community is now putting pressure on them.”

“There are also war crimes [soldiers committed] during fighting with the AA,” he said. “Arbitrary arrests and killings amount to war crimes.”

“Torture constitutes a human rights violation,” he said. “But it’s a little hard for us to point fingers since we don’t know exactly what has happened. … We are still gathering all the information we need and considering presenting it at the commission’s meeting in order to decide what to do.”

‘We want the truth’

Arakan National Party (ANP) vice chairwoman Aye Nu Sein said local politicians want to know the truth about what happened to those who died in detention.

“We want the truth to be revealed,” she said. “We’d like to help too, but who do we complain to, and who would take action if we did?”

The ANP, which represents the interests of the ethnic Rakhine people in the state, has issued a report urging investigations and punishment of those responsible for war-related killings under relevant laws.

In response to the comments by rights groups, Zaw Min Htun said the military can’t look into every accusation that comes its way.

“We can’t take action on every single issue,” he said. “International organizations have respectful conventions, but sometimes it’s like the fox in a fable accusing you or your father or your grandfather. In that sense, we can’t do anything, but we’re doing our best.”

In an interview with RFA last week, Yanghee Lee, the United Nations special rapporteur on human rights in Myanmar, said she was particularly worried about military atrocities that might occur during an army-imposed internet shutdown in the Rakhine conflict zone.

According to RFA’s reporting, at least 14 civilians have died while in military or police custody or detention since March 2019 during the Rakhine conflict. Here is a brief summary of each case:

March 14:  Hla Maung Win, 23
He was detained as he traveled to Mrauk-U Hospital to be treated for malaria. He was unconscious when the vehicle carrying him was stopped along with the driver and eight passengers. The driver who was later freed said Myanmar soldiers detained and questioned them. Hla Maung Win’s body was later returned to his family by men wearing police uniforms. RFA’s calls to police and the military about the case went unanswered.

April 10:  Zaw Myo Htun, 25, Thein Tun Sein, 40, and Maung Than Nu, 45, from Letka village, Mrauk-U township
They were arrested with 24 other villagers for questioning by the military. They died on Apr 11, 14, and 21,  respectively. The Myanmar Army later said one died of respiratory problems, another of drug addiction, and the third of suicide.

May 2:  Than Ge Aung, Zaw Lat, Than Oo, Kamwe Che, Tun Shwe Win, Maung Win, Aung Lin Zaw
Six died on the spot, and another died later from injuries after the Myanmar military shot detained men in a school compound in Kyauktan village, Rathedaung township. They were among nearly 300 villagers who were detained and questioned for allegedly having connections with an Arakan Army training camp nearby. The military said the soldiers had to open fire when some of the detainees tried to attack the guards, despite the firing of warning shots. Other witnesses denied there had been warning shots and said the chaos broke out when a mentally disturbed man had started yelling at night.

May 26:  Kyaw Hlaing, 43
He was among three men from Letka village in Mrauk-U township who were arrested by the military while they were collecting firewood on May 22. On May 25, the three men were transferred to the police station. Kyaw Hlaing died the next day from injuries he sustained during the questioning by the military, according to his relatives. His daughter said he had a badly swollen face and injuries to his body when she had seen him in the hospital. The military has not commented on the case.

June 24:  Nay Myo Tun, 23, a carpenter from Pauktaw Byin village, Mrauk-Oo  township
According to the military, he was arrested on June 20 along with seven others on suspicion of being members of the Arakan Army. The men were questioned at the Kyauktaw township police station. Nay Myo Tun’s family members heard from villagers that he had died in custody and that his body was in the mortuary of a local hospital. They subsequently retrieved his body. The military has not commented on the circumstances of the death.

July 1:  Zaw Win Hlaing, 28, from Shwe Tun Phyu village, Mrauk-U township
He died on July 1 following his arrest by the military on June 19. He had been transferred to police custody on June 24 and was subsequently sent to a hospital. Zaw Min Hlaing’s mother, who saw him at the medial facility, said her son told her he had been tortured during questioning. He said soldiers put rocks into a sarong (longyi) and hit him on the back and knees, and poked knives in his calves. He was taken to Kyauktaw Hospital after a court hearing on June 25, and because he was vomiting blood was later moved to Sittwe Hospital where he died on July 1. A military spokesman said he was unable to comment on the claims of torture. He said the military has rules preventing the torture of detainees.