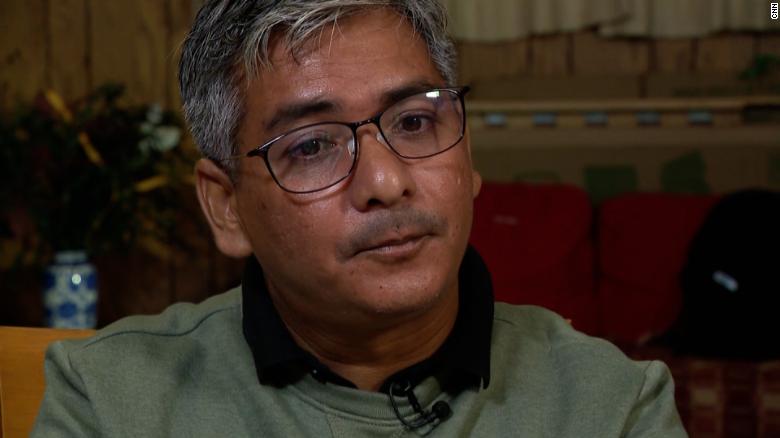 Hong Kong (CNN Business)Myanmar’s military junta is using torture to extract information from detainees on the whereabouts of senior opposition members and activist leaders, according to an American citizen and journalist who was recently released from a Yangon prison.
Nathan Maung, 44, was detained for more than three months in Myanmar before being deported to the United States on June 15. During that time, he said he endured two weeks in a secretive military-run interrogation center in the country’s biggest city Yangon.
Speaking to CNN Business on Wednesday from Washington, DC, Nathan Maung described his time in the facility as “hell” and said he prepared himself to die there, believing the soldiers would kill him.
He is one of more than 6,200 people arrested since Myanmar’s military, led by Gen. Min Aung Hlaing, seized power in a coup on February 1, according to advocacy group Assistance Association for Political Prisoners. The military overthrew the elected government of Aung San Suu Kyi and embarked on a bloody crackdown on dissent and on any perceived opposition to its rule. Mass street protests have been suppressed with deadly force.
Former inmates, lawyers and family members of those held have previously told CNN the detainees have been subjected to torture during interrogation and held out of contact from loved ones. Some — including members of the ousted National League for Democracy (NLD) Party — have died while in custody, their bodies showing signs of brutal torture.
CNN Business has reached out to Myanmar’s military for comment. 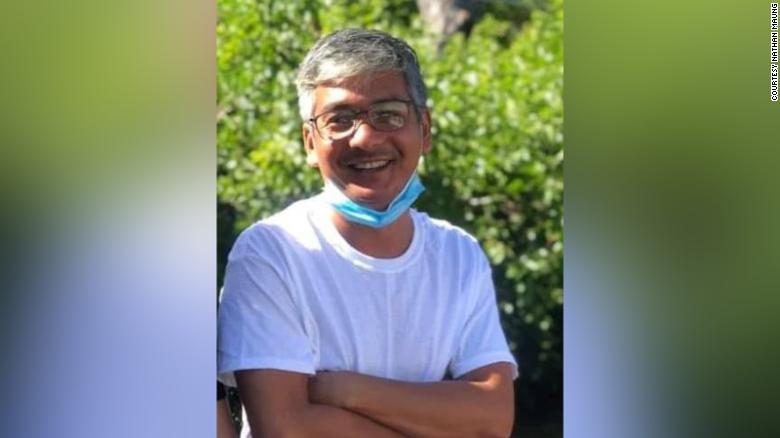 Nathan Maung was detained in Myanmar for more than three months.
Despite months of escalating violence, the junta has said it is using restraint against what it called “riotous protesters,” who it accuses of attacking police and harming national security and stability.
Nathan Maung is co-founder and editor in chief of the Myanmar online news site Kamayut Media. He was arrested on March 9 alongside co-founder and news producer Hanthar Nyein, 39, as security forces raided their office.
Though now living in the United States, Nathan Maung said he is “not happy” and feels an overwhelming guilt he was released because of his American citizenship, while his friend and colleague Hanthar Nyein, a Myanmar national, remains incarcerated in the notorious Insein Prison.
“We’ve been through the hell together. So, we should be released together,” Nathan Maung said, his voice cracking with emotion. “I really want him to know that we are not forgetting him. He’s not alone.”
Danny Fenster, another American journalist who was prevented from boarding a flight out of Myanmar on May 24, remains in detention, also in Insein Prison.

Nathan Maung knew something was wrong when a convoy of military trucks full of soldiers pulled up outside Kamayut Media’s office in Yangon. Security forces barged through the door and raided the office, seizing equipment and taking Nathan Maung and Hanthar Nyein with them as they left.
“They sent us to the interrogation center in Mingaladon,” he said, referring to a suburb of Yangon.
There, Nathan Maung said they were beaten, denied water for two days and food for three. They were handcuffed and blindfolded nearly the entire two weeks they were there, he said.
“They started with a blindfold and handcuffs and then started questioning. They kicked our face, hands and shoulder, all the time. For every answer, they beat us. Whatever we answered — whether correctly or incorrectly — they beat us. For three days, non-stop,” he said.
Nathan Maung said the facility had five houses and one big office. Within the buildings, he said, there were four interrogation cells. He said his blindfold was removed on his final day there so he got a look at the room and the buildings.
“In the room there is a CCTV camera, there’s no bed, only a small table and a chair so you sit all day and night,” he said. “You are blindfolded and there is no time to sleep. They won’t let you. They put the handcuffs in front so you can try and sleep like that, but every five minutes they show up and start the questioning.” 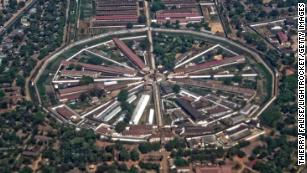 The Americans locked up in Myanmar’s notorious Insein prison
This torture carried on for eight days, during which the detainees would be moved between the houses and cells.
His colleague Hanthar Nyein bore the brunt of the torture, Nathan Maung said.
“Hanthar was badly treated because he was Burmese national. He had to kneel down on the ground for like two days. His skin was burnt with a cigarette,” he said.
Nathan Maung believes the soldiers were pressuring Hanthar Nyein to hand over his phone password, which would give them access to his encrypted communications and phone records with high profile opposition and activist leaders.
For days, Hanthar Nyein held out from revealing the password, offering them false numbers in the hope his phone would automatically lock anyone out of using it. But the final straw came when the guards threatened to rape him.
“Hanthar couldn’t stand for this and so he surrendered his password and they stopped beating,” Nathan Maung said.
Nathan Maung’s phone broke during the arrest. The beatings stopped for him on the fourth day, he said, when the soldiers discovered he was a US citizen.
“They stopped beating me and started asking questions about why the US government sent me and were giving me US funding, if I was working for the CIA — those kind of stupid questions,” he said. “I said no, I’m a journalist, no one gave me money.”
So, the line of interrogation focused instead on his media company Kamayut Media. He said the soldiers asked about budgets and finances. “They are looking for any fundraising or where we got it,” he said. 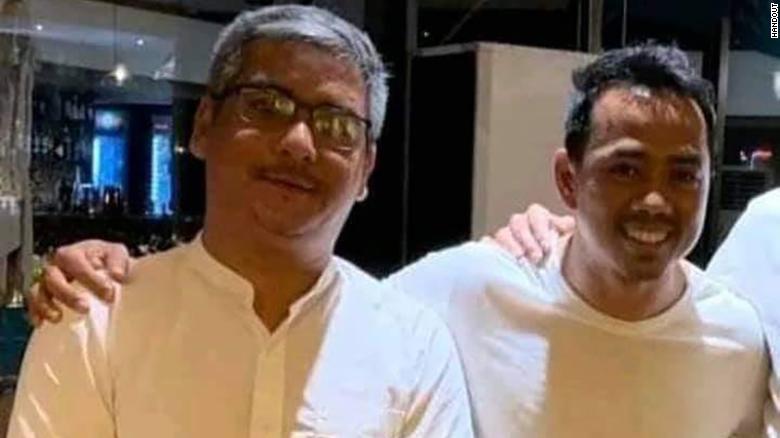 Journalists Nathan Maung and Hanthar Nyein in Myanmar.
Nathan Maung believed he would die in the interrogation cell.
“I thought, if we survived for two days at the beginning, we’ll be alive … but after that then nobody knows,” he said. “When they started giving us drinking water I thought, OK, we won’t die, we’ll live.”
Nathan Maung said he meditated to help get through the mental and physical trauma. “That’s the only thing that saved us from the hell,” he said.
But his ordeal was not over.
After 15 days, Nathan Maung said he was transferred to a detention center adjoining Myanmar’s Insein Prison, an overcrowded penitentiary of about 10,000 inmates that has a reputation for ill-treatment and terrible conditions. For two more weeks, he was kept in a large cell with about 80 other people — all student activists, protesters, and NLD members, he said. Then he was moved to solitary confinement, where he stayed until his release on June 14.

Nathan Maung and Hanthar Nyein’s treatment in detention are not isolated incidents.
On Tuesday, Human Rights Watch reported that many of the thousands of people arbitrarily detained by the military have been subjected to torture, routine beatings and other ill-treatment since the coup.
“Myanmar’s military and police often hold detainees in custody for extended periods, in overcrowded and unhygienic interrogation centers and prisons. Those detained are frequently kept incommunicado, unable to contact relatives or legal counsel,” the organization wrote in the report. It added the victims “described beatings, burnings from lit cigarettes, prolonged stress positions, and gender-based violence.”
Manny Maung, HRW’s Myanmar researcher and no relation to Nathan Maung, said in a statement that since the coup, authorities have been using torture “without fear of repercussions.”
“The sheer brutality of the beatings and abuse shows the lengths to which Myanmar’s military authorities are going to silence anyone opposing the coup,” she said.
Nathan Maung said he believes he was arrested because the military saw him “as an enemy.” 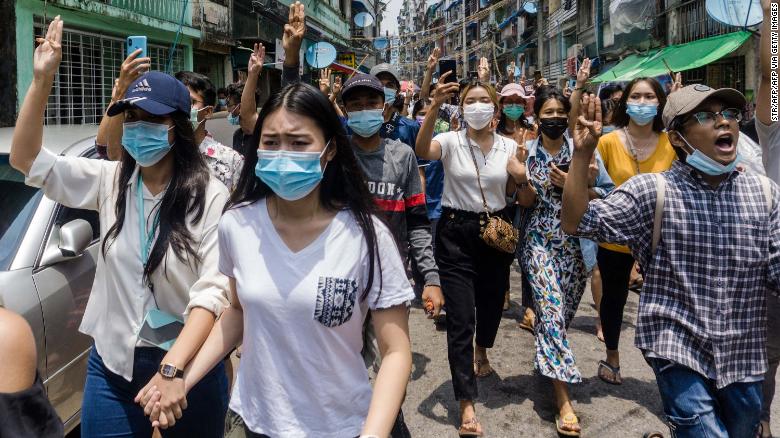 He was one of at least 88 journalists arrested since the military takeover as part of a crackdown on independent media. Many media workers have been forced into exile abroad or have fled to rebel-controlled areas in the jungles. Those who remain in the cities have gone into hiding, and swap safe houses every few days to avoid arrest.
“They tortured me because I believe in democracy and human rights and freedom of expression,” Nathan Maung said.
The military junta has struggled to consolidate its power over the whole country, as it continues to face mass public opposition. Large-scale nationwide protests seen in the months following the takeover were brutally suppressed. In their place, local militia groups have formed to defend towns and villages from military violence and battles between junta forces and armed resistance groups are being waged on multiple fronts around the country.
“Civil war is happening now, it’s already a failed state,” Nathan Maung said.
Nathan Maung said the international community cannot stand by while the junta continues to operate with impunity and lawlessness against its people and called for “aggressive action” against the military.
“We don’t have time to wait and see. There are thousands refugees going to flee to the border, a humanitarian crisis happening now,” he said.
Standing in a park, surrounded by beech trees in Washington, DC — thousands of miles away from the cells, the torture, and the violence — Nathan Maung feels torn, but says he plans to return to Asia and base himself in neighboring Thailand to continue fighting for a democratic Myanmar.
“Sometimes, I dream I really went back to prison, because my body is here but my mind is with my friends, my journalists, my country,” he said.
“All my life, I have been working for a free Burma, as citizen and as a journalist. Until I die, I have to work for that. I have to take care of my people. They deserve democracy and human rights,” he said.
— Caitlin Hu contributed to this report.
CNN News
https://nd-burma.org/wp-content/uploads/2021/06/mh.jpg 441 1500 ND Burma https://nd-burma.org/wp-content/uploads/2020/04/ndbLogo-296x300.png ND Burma2021-06-28 11:50:292021-06-29 12:02:08Released American journalist says Myanmar military using torture to hunt down opposition leaders