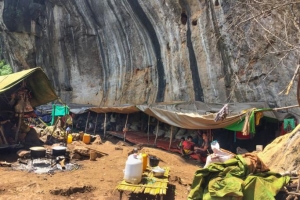 This picture taken on June 1, 2021 shows people taking refuge in a jungle area in Demoso, Kayah state, after they fled from conflict zones where fighting between the Myanmar military and members of the People’s Defence Force (PDF) took place as the country remains in turmoil after the February military coup. Photo: AFP

A member of a local refugee relief team told Mizzima that tens of thousands of refugees in Kayah State are currently facing food shortages.

Relief teams are sending food as far as they can reach but refugees West of Demawso, Daw Nga Kha Kone Thar 4 mile, Loi Nam Fa and Shan-Kayah border are out of reach for relief teams and are facing a lack of rice and provisions, there is also a high price and scarcity of commodities in the vicinity.

Due to military attacks against refugee camps in the eastern part of Demawso, Loi Yin and Moe Byel, refugees have been forced to flee to different places. In addition, the military burnt food left over from the camps when refugees fled according to an official.

“Weekly Update on the Situation of Human Rights in Myanmar Post-Coup”...

Deadly reprisals: regime steps up attacks on civilians in retaliation for conflict...
Scroll to top