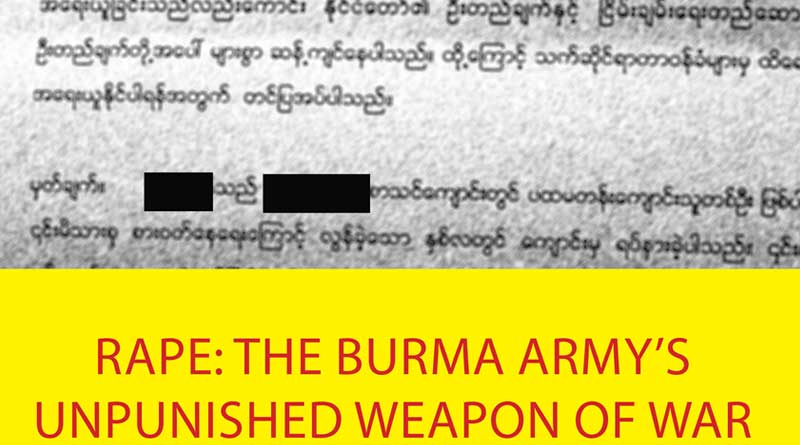 In October 2016, amid renewed violence in Rakhine state, it was reported that “dozens” of women had been raped by Burma/Myanmar army soldiers. The story shocked international media and the United Nations Special Representative on Sexual Violence in Conflict called on the Government to conduct an investigation into the alleged incidents.

However, the Burma/Myanmar army has long used rape as a weapon of war, especially against Burma’s/Myanmar’s ethnic nationalities. Despite the hundreds of rapes that have been recorded by Burma’s/Myanmar’s NGOs and civil society organizations (CSOs), no member of Burma’s/Myanmar’s government forces has ever been punished for committing rape or sexual violence. This is because under Burma’s/Myanmar’s 2008 Constitution the army gifted itself immunity from the country’s laws, meaning allegations of rape are only investigated internally by the army, if at all.

This has resulted in soldiers being able to rape with impunity. A 2002 report by the Shan Women’s Action Network called it a ‘license to rape’. This immunity is an infringement of international law as the UN explicitly “does not recognize any amnesty for […] crimes against humanity, war crimes, and other serious violations of international humanitarian law.”

organizations have recorded the testimonies of 95 women who have been raped or suffered sexual violence at the hands of the Burma/Myanmar army, police force or Border Guard Force (BGF). Each of these cases was recorded in ethnic nationality areas.

However, when examining the data gathered by other NGOs and CSOs in Burma/Myanmar the number of rapes and cases of sexual violence committed by Burma/Myanmar government forces is clearly significantly higher. Indeed, international organizations and NGOs have repeatedly accused the army of a ’systematic’ campaign of rape to terrorize and subjugate ethnic nationality communities.

In January 2014, the Women’s League of Burma (WLB) published a report documenting 104 cases of sexual abuse in ethnic areas over a period of 4 years. 41 of the cases were accounts of brutal gang rape and some of the victims were as young as 8 years old. 27 of the women were either murdered or died from their injuries. In November 2016, the WLB published an updated report to mark the International Day to End Violence Against Women, which said the organization had documented 92 cases of violence (not specifically sexual violence) against women by government forces between 2010 and 2015, and 18 cases for the period 2015-2016.

The 2014 WLB report included such cases as the 2012 gang rape and prolonged torture by Burmese/Myanmar troops of a grandmother in a church in Luk Pi village near the Kachin-China border. During a Burma/Myanmar army offensive against Kachin rebels in Northern Burma/Myanmar, soldiers found the woman sheltering in a church. About ten troops beat her with rifle butts, stabbed her with knives, stripped her naked and gang-raped her over a period of three days. The woman has suffered from severe mental illness since the ordeal. Despite there being a witness to the attack, the Burma/Myanmar army has not opened any investigation into this crime.

Rape has been recognized by the United Nations as a weapon of war used in conflict across the globe. The 2008 UN Security Council Resolution on Women Peace and Security highlights that “women and girls are

particularly targeted by the use of sexual violence, including as a tactic of war to humiliate, dominate, instil fear in, disperse and/or forcibly relocate civilian members of a community or ethnic group.” Rape has also been committed by Ethnic Armed Groups (EAOs), though not on the same scale as by the Burma/Myanmar army.

There is also a reluctance of victims to report due to shame and fear of retribution The WLB notes that women in Karen, Kachin and Chin states who have been victims of sexual violence are expelled from their villages on the assumption that the village must be ‘cleansed’ of the victims. The military is also able to close off conflict affected areas of Burma/Myanmar to outside observers such as journalists and aid workers, meaning that reports of individuals or systemic rape cases cannot be verified.

New government, old system
The beginning of 2016 saw Burma’s/Myanmar’s first civilian-led government in more than half a century take power under Daw Aung San Suu Kyi and her National League for Democracy (NLD) party. Ethnic nationalities had overwhelmingly given the NLD their vote over ethnic parties so as to support the party most associated with resistance to the military dictatorship.

However, the autonomy the army enjoys under the 2008 Constitution and the accompanying institutional separation of powers means that the NLD has no formal command over the military’s actions. The Government’s silence in the face of repeated reports of systematic rape in ethnic nationality areas jars with Daw Aung San Suu Kyi’s frequently repeated claim that the peace process is her Government’s priority and that “we can do nothing without peace in our country.” As human rights expert David Baulk points out in an essay for the Wall Street Journal “If left unchecked, impunity for grave abuses in Burma’s ethnic states will only stifle the country’s development.”

On 15 November this year, ND-Burma member organization the Kachin Women’s Organization of Thailand (KWAT) released a report examining ongoing Burma/Myanmar army offensives and abuses going on in Northern Burma/Myanmar under the NLD Government, highlighting the fact that the perpetrators of the rape and murder of two Kachin teachers in January 2015 remained at large and that a 73 year-old victim of a military sexual assault attack in April 2015 had passed away in June 2016 without seeing justice. The report went further, noting that in both instances police investigation into the cases had been deliberately obstructed by the military. Burma’s/Myanmar’s criminal defamation law has also been used to intimidate and prosecute victims and witnesses who have spoken out.

Fighting for justice for survivors
The Burma/Myanmar army continues to use rape as a weapon of war as soldiers enjoy impunity for their crimes and the NLD leadership is silent in the face of a litany of accusations. This must end. The new government must also commission an independent investigation into systematic sexual violence committed by the army.

The draft National Law on Protection and Prevention of Violence against Women (PoVAW), on which work began over three years ago, must finally be passed.

Burma/Myanmar must begin honoring its commitments under international law. The country has signed the Declaration of Commitment to End Sexual Violence in Conflict but has not taken any concrete action to follow the guidelines set out therein. At its 64th session in July 2016, the UN’s Committee on the Elimination of Discrimination against Women (CEDAW) in its concluding remarks on Burma/Myanmar observed that:

“Continuing sexual violence perpetrated by the military and armed groups against rural women and ethnic minority women, in particular in Kachin, Kayah, Kayin Mon and Rakhine States; widespread impunity enjoyed by perpetrators of such violence as well as threats and revictimization of women who attempt to report such cases; the low rate of prosecution of perpetrators of gender-based violence against women, in particular when such crimes are committed by the military and armed groups; and the conferment of immunity on perpetrators of crimes of sexual violence.”

The most recent WLB report notes that lawyers who try to use CEDAW provisions in court are faced with objections from judges, who order them to use “local criminal law” instead.

However justice for victims does not have to be limited to prosecution of perpetrators, which faces huge resistance from the army and has also not yet been advocated for by the civilian government or Daw Aung San Suu Kyi. Aileen Thomson from the International Center for Transitional Justice (ICTJ) in a discussion with ND-Burma listed medical care, including psycho social support, as one form of reparations that can greatly benefit survivors. Providing medical support services to victims of sexual violence as part of a larger health package benefitting conflict survivors also prevents rape victims being identified and subsequently stigmatized. “State sanctioned human rights violations do not just affect the victims, but sow distrust in communities and populations as whole. For trust to be re-established and for the country to be able to move forward a process of recognition and reparations must begin,” said Ms Thomson. 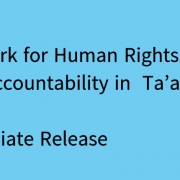