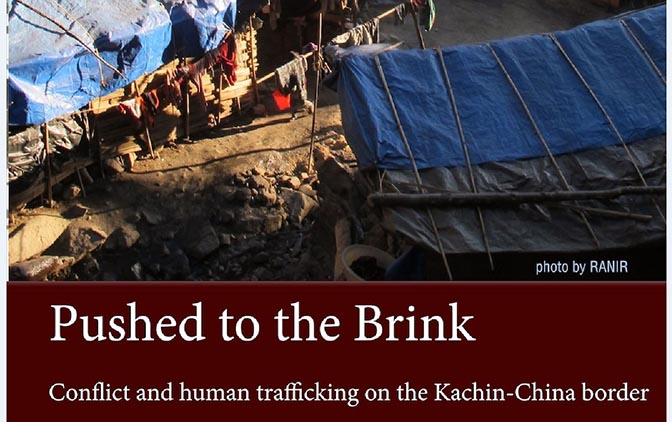 The Burmese government’s renewed war against the Kachin has exponentially increased the risk of human trafficking along the China-Burma border. New documentation by KWAT indicates that large-scale displacement, lack of refugee protection and shortages of humanitarian aid have become significant new push factors fuelling the trafficking problem.

Burma Army offensives against the Kachin Independence Army since June 2011 and widespread human rights abuses have driven over 100,000 villagers from their homes, mainly in eastern Kachin State.  The majority of these refugees have fled to crowded IDP camps along the China border, which receive virtually no international aid.  Desperate to earn an income, but with little or no legal option to pursue migrant work in China, many cross the border illegally.  Their lack of legal status renders them extremely vulnerable to exploitation by traffickers, who use well-trodden routes to transport and sell people into bonded labor or forced marriage as far as eastern provinces of China.

Although ongoing attacks and massive social upheaval since the start of the conflict have hampered systematic data collection, KWAT has documented 24 trafficking cases from Kachin border areas since June 2011, mostly involving young women and girls displaced by the war, who have been tricked, drugged, raped, and sold to Chinese men or families as brides or bonded laborers.  The sale of women and children is a lucrative source of income for traffickers, who can make as much as 40,000 Yuan (approximately $6,500 USD) per person.  While some manage to escape, and may be assisted by Chinese authorities in returning home, others disappear without a trace.

Kachin authorities and community-based groups have played a key role in providing help with trafficking cases, and assisting women to be reunited with their families. No trafficked women or their families sought help from Burmese authorities. The Burmese government lists an anti-trafficking border liaison office at Loije on the Kachin-China border, but it is unknown to the community and thought to be non-functional.

Far from seeking to provide protection to the internally displaced persons (IDPs) and mitigate trafficking risks, the Burmese government has continued to fuel the war, block humanitarian aid to IDPs in Kachin controlled areas, and even attack and destroy IDP camps, driving refugees into China. It has also closed some of the immigration offices on the Kachin-China border which could provide border passes for refugees to legally seek work in China.

It is thus ironic that in 2012, Burma was recognized in the U.S. State Department’s Annual Trafficking in Persons Report as increasing its efforts in combating human trafficking, resulting in a rise from its bottom-level ranking for the first time in the history of the report, and a corresponding increase in financial support to Burma’s quasi-civilian government.

It is urgently needed to address the structural problems that have led to mass migration and trafficking in the past and also spurred the recent conflict.  The Burmese military’s gross mismanagement of resource revenues from Kachin State over the past few decades, and ongoing land confiscation, forced relocation, and human rights abuses, have pushed countless Kachin civilians across the Chinese border in search of peace and the fulfillment of basic needs. These problems led to the breakdown of the 17-year ceasefire between the Kachin Independence Army (KIA) and the military-dominated government in 2011. Refusing to engage in dialogue to address Kachin demands for equality and equitable development, the government launched attacks to seize total control over the wealth of resources in Kachin State.

Resolving the current conflict via genuine political dialogue would not only be a step towards peace, but also a concrete move towards curbing human trafficking from Kachin areas.  Launching a range of reforms dealing with the political and economic factors driving people beyond Burma’s borders is critical to addressing trafficking. Therefore, KWAT recommends the following:

To the Burmese government

To the Chinese government

To the international community