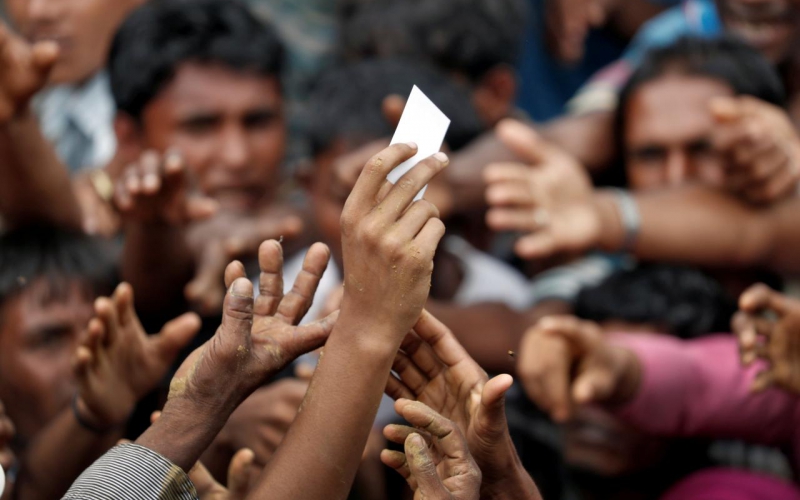 Veronica Collins, ND-Burma
Abuses reportedly being carried out in Rakhine are the same as have been documented across the country – especially in ethnic nationality areas – since 2004, writes Veronica Collins of the Network for Human Rights Documentation in Burma.

At a recent democracy forum held in Burma’s capital Nay Pyi Taw, Daw Aung San Suu Kyi was clear about who she believes is to blame for the country’s problems. “The victims of the past, those who can’t shatter the shackles of the past, have caused a lot of hindrances in the democratic transition,” she told those assembled.

The Nobel Laureate’s comments came before the current crisis in Rakhine, where the Burmese military has been accused of a campaign of “ethnic cleansing” by the UN, resulting in the most rapid outflow of refugees since the Rwandan genocide in 1991. Those fleeing the violence arrive in Bangladesh with testimonies of horrific human rights violations, bullet wounds and marks of sexual violence.

It seems it is not victims, but the military that is a ‘hindrance’ on Burma’s path to democracy.

For the last 13 years, the Network for Human Rights Documentation (ND-Burma) has been recording human rights violations and fighting for justice for victims. The abuses reportedly being carried out in Rakhine are the same we have been documenting across the country – especially in ethnic nationality areas – since 2004. Though some violations are committed by ethnic armed organizations, the large majority are carried out by government security forces.

As the world’s attention is on Rakhine, the military has in fact renewed offensives in ethnic nationality areas on the other side of the country. As always, these have been accompanied by allegations of rights violations against civilians.

Indeed, ND-Burma’s documentation suggests that the military has not been restrained by Daw Aung San Suu Kyi’s government. Over the course of 2016 – the NLD’s first year in office – ND-Burma recorded almost double the number of human rights violations than in the previous year. As in Rakhine, denial of wrongdoing and impunity for abuses continue to be the norm.

A refusal to examine the country’s bloody past has resulted in the military carrying on with business as usual. ND-Burma believes the only way to stop the cycle of violence is to deliver justice for Burma’s many victims of human rights violations. Those that have committed grave human rights violations need to be held accountable and victims be given the support they need to rebuild their lives.

Currently, impunity and illiberalism is coded into the country’s institutions and laws. The military is not under civilian control and the Constitution it drafted in 2008 provides soldiers de facto immunity from prosecution. 25% of seats in the parliament are reserved for the military and three important ministries continue to be under their control.

When the NLD took office only last year, hope was sky high, both at home and abroad. The Dalai Lama spoke of a “historic milestone for Myanmar,” and “the immense goodwill and worldwide support for this flowering of democracy.” Having refused to investigate the military’s past abuses against civilians, this hope has quickly evaporated.

As a start, Burma needs to give unfettered access to the UN Fact Finding mission to investigate allegations of grave human rights abuses across the country. Most victims ND-Burma interviews say they want nothing more than an end to conflict and guarantees that no one will ever face these abuses again. This will require institutional reform and a drastic recalibration of the military’s role in Burmese politics.

In a case recorded by ND-Burma in 2010, a monk was arrested and tortured by the military for carrying out political activities in support of the NLD. When he refused to speak, the soldiers beating him said “we have the right to kill you, we will not be punished and nobody can take us to court because we are the state caretakers.”

If this attitude is ever to change, Burma will need to start talking about justice.

The Network for Human Rights Documentation (ND-Burma) is a 13-member organization whose members represent a range of ethnic nationalities, women and the LGBTI community. We have been documenting human rights abuses and fighting for justice for victims since 2004.

Memory of Sacrifice: Memory, Justice and the Saffron Revolution