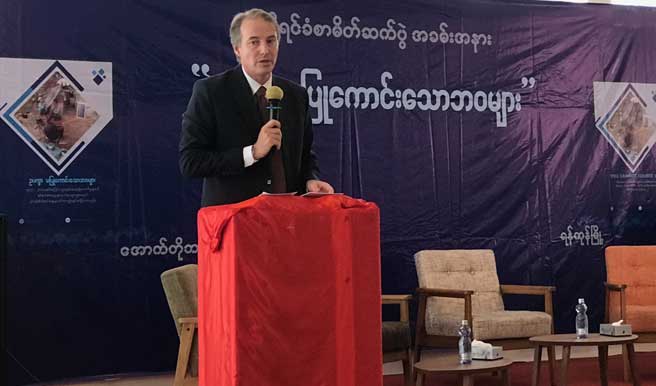 Welcome and Mingalaba, Ladies and Gentleman, friends, and thank you for inviting me to deliver the opening remarks for the launch of the report “You cannot ignore us”. 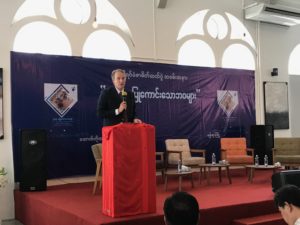 Let me thank the Network for Human Rights Documentation Burma, the organisations and people behind it – it is an honour not only for me, but also for the EU to launch this publication together with you here today.

Let me also congratulate you on the important work that this report represents.
I have already had the pleasure to meet some of the people behind the report and was impressed by your work and determination and commitment to human rights defenders and political prisoners.

The congratulations extend, of course, to all the individuals and organisations behind this report; and we of course commend the victims for their courage to speak out.

The report “You cannot ignore us” comes at a crucial time. Democratic transition that started in 2011 has brought big change to the whole of Myanmar. 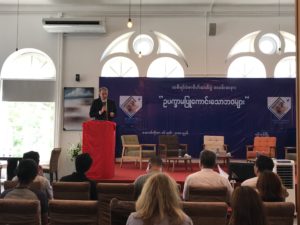 If we take a step back, we can see that many things, including human rights, have improved over the past years in Myanmar.

This should serve as an encouragement that change is possible – and that everyone should intensify their determination in defending and promoting human rights at this important moment.

The human rights violations described, not only in this report, but in many others as well, therefore cannot, or rather “should not” be ignored. Because ignoring the past, however painful, carries a risk of repeating it.

This is why transitional justice is so central to nation-building as experiences from across the world, Europe included, have taught us.

Past crimes must be dealt with. There is a very personal reason for this. In fact, I was touched by the humbleness of many of the victims quoted, which also reflected their desire that what was done to them would not be done to anyone again in the future.

As one victim put it, “I don’t have any feelings of hate and revenge. […] I don’t want other villagers to face this kind of torture.”

This is an admirable attitude – not of revenge, but in pursuit of happiness of future generations. Because the research is clear: unless countries deal with the skeletons in the closet, the cycle of violence is highly likely to continue.
How you do it is entirely up to you. You outline very well the different forms transitional justice can take: tribunals, truth commissions, restitution, compensation, rehabilitation, symbolic satisfaction, guarantees of non-recurrence and reform of laws and institutions.

What is the right path for a country is for its people themselves to debate and find out.

What we do believe is that the process should be participative, consultative and include outreach; it should be rights-based and victim-centred; and it should include a gender dimension.

The European Union stands ready to support such a path, but it is upon the people of Myanmar themselves to find it.

My last comment: sometimes it takes the extraordinary courage and humility of political leaders to set a new course, one that heals the scars of the nation and allows former enemies to face the future together.

European history is full of such moments of courage. In fact, the European Union is in itself the result of visionary and bold recognition of past mistakes and the need to build a common future.

But let me give just one picture to illustrate a powerful act of reconciliation in Europe. 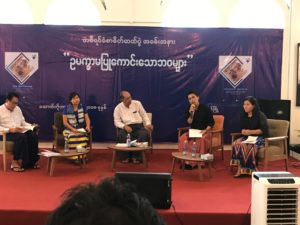 Picture this: in 1970, then West German chancellor Willy Brandt is visiting Warsaw, and in front of a monument to the Jewish victims of the Warsaw Ghetto Uprising, he unexpectedly falls to his knees, paying tribute to the millions of Jews murdered by his own country during the Holocaust. This gesture was part of the process to heal our wounds, between Germany and Jews, between East and West, between past and future generations. It helped hand over a stronger society to the next generations of Europeans.With your report, you thus not only give a voice to the voiceless, you also make an important contribution to keeping Myanmar on its path to democracy.
Thank you very much, djezu tin ba de.

YOU CANNOT IGNORE US: Victims of human rights violations in Burma from 1970...