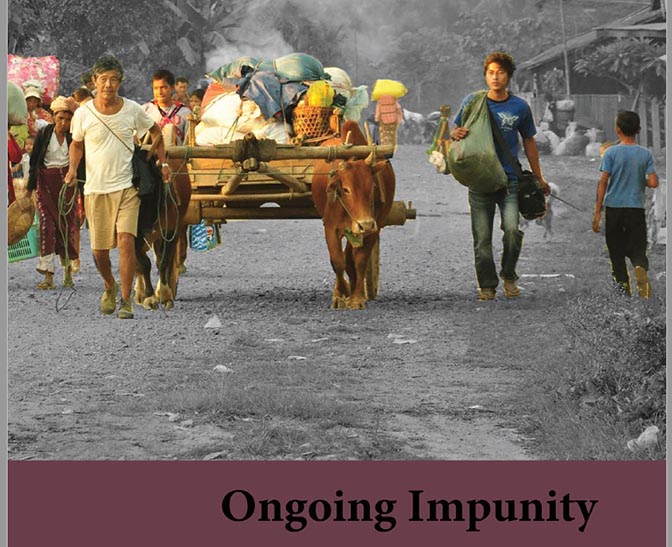 This report provides an update of atrocities committed by the Burma Army against civilians since it broke its 17-year ceasefire with the Kachin Independence Army (KIA) one year ago. It highlights the particular suffering of women during the conflict, who have been forced to be porters, used as sex slaves, gang-raped and killed.

Since the start of the conflict, there has been a huge deployment of Burmese troops into Kachin State and northern Shan State. Currently about 150 battalions are being used to crush the KIA, tripling the number of Burmese troops in the area. These troops have deliberately targeted civilians for abuse, causing vil- lagers to flee in terror, leaving large swathes of countryside depopulated.

There is strong evidence that Burmese troops have used rape systematically as a weapon of war. In the past year, KWAT has documented the rape or sexual assault of at least 43 women and girls, of whom 21 were killed. The rapes have been widespread, occurred in thirteen townships, by ten different battalions. Women have been openly kept as sex slaves by military officers, and gang-raped in church.

There has been complete impunity for these crimes. When the husband of a Kachin woman abducted by the Burmese military tried to press charges, the Naypyidaw Supreme Court dismissed the case without even hearing his evidence.

The continued abuse against civilians has swelled the numbers of internally displaced persons in Kachin State to over 75,000, most of whom are sheltering in makeshift camps along the China border, where little international aid has reached them.

KWAT is calling on the international community to denounce the ongoing human rights abuses, and maintain pressure on the Burmese government to immediately implement a nationwide ceasefire, pull back Burma Army troops from ethnic areas and start dialogue with the United Nationalities Federal Council towards a process of genuine political reform.

Extreme Measures: Torture and Ill Treatment in Burma since the 2010 Electio...