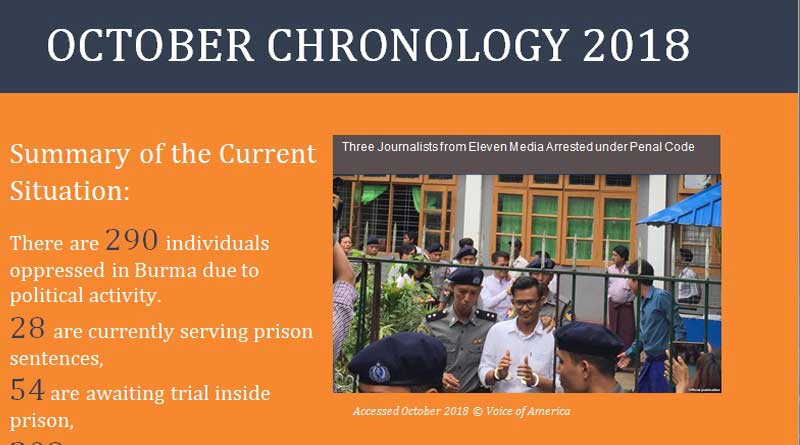 October was another grim month for Burma’s press freedom. Three senior journalists from Eleven Media were charged under Section 505(b) of the colonial era Penal Code by the Yangon Regional Government. 505(b) is used frequently to suppress freedom of speech. Eleven Media allegedly criticised the Yangon Regional Government. The accused are managing editors Kyaw Zaw Lin, Nari Min, and chief reporter Phyo Wai Win. Such trials can financially cripple small media corporations. The trio were arrested for deeming to cause “public distrust in the company”. These actions from elected officials is unacceptable in Burma, a country in the midst of transition into a democracy. The intervention of President U Win Myint in the case is welcomed, but his advice has thus far gone unheeded. In the lead up to the UN’s ‘Day to End Impunity for Crimes against Journalists’, this was yet another disappointing set back for media freedom in Burma.

Rather than periodic recommendations from the echelons of power, Burma needs comprehensive reform of its many outdated laws.

This month marked another chapter in the trial of the Tanintharyi Journal. On October 1 the weekly journal was charged by the Dawei Township court in Tanintharyi Region under Article 25(b) of the Media Law for a satirical piece published in the Journal’s November 20, 2017 issue. The piece titled “Electioneering Smile” allegedly satirized regional Chief Minister Lei Lei Maw as the fictional Shwin Gwan Gwep lawmaker. If found guilty they could be fined up to 1,000,000kyats ($628) for ‘deliberately affecting the reputation of a specific person or an organisation, if not concerned with public interests and human rights’. On October 26, the Supreme Court in Naypyitaw rejected an appeal to drop the charge filed on August 14. Without trying to understand the  nature of satire, charges of defamation is concerning for media freedom. The Eleven Media trial and this lawsuit demonstrates the continued deterioration for press freedom in Burma. Moreover, freedom of expression is also under attack from a variety of defamation cases.

On October 23 former member of the NLD, Magway Division Lower House MP, Tin Aung Tun charged Dr Myo Nyunt under Section 10 of The Law Protecting the Privacy and Security of the Citizen, at Minbu Police Station. The case essentially stems from a series of remarks made to reporters following an NLD executive committee meeting. An inter-party dispute that could now escalate into jail time. A state of affairs perfectly encapsulating Burma’s judicial predicament. Following the NLD committee meeting, Dr Myo Nyunt told reporters that Tin Aung Tun had resigned because “party rules were too strict and they were also not happy that they had to make cash contributions to the party”. Tin Aung Tun quickly followed with a lawsuit because “what he said is not true and damaged my reputation”. Article 8(f) of The Law Protecting the Privacy and Security of Citizens makes it a crime to act “in any way to slander or harm a citizen’s reputation in the absence of an order, permission or warrant issued in accordance with existing laws or permission from the president or a Union-level government body”. Article 10 states that those found guilty will be sentenced to between six months and three years and a substantial fine. The Government must take action and amend this restrictive law.

The Law Protecting the Privacy and Security of Citizens was used again this. On October 26 Aung Than Wai was sentenced to six months imprisonment for criticising former Arakan State Secretary. Aung Than Wai was charged for a facebook post allegedly criticising the State Government following the Mrauk-U riots.

PAPPL continues to be used against activists to restrict freedom of expression. In October, two committee members of the Movement for Democracy Current Force (MDCF), Thet Zin and Kyaw Zin Lat, were charged under Section 20 of PAPPL. They both held protests calling for the International Criminal Court (ICC) recommendation for action to be taken against Burma’s Generals. Aung Myint, Myat Kyaw, Kyaw Moe, and Thet Myo Aung were charged at Kyauktada Police Station under Section 199 of PAPPL, for supporting the Fu Yun labour strike. All Burma Federation of Student Union (ABFSU) members, Ninn Aung and Wai Yan were arrested by an unknown group. A total of 81 activists and civilians have been facing trial outside prison and inside prison under PAPPL. Liberal democratic societies respect human rights and allow people to protest freely. In this case however, those cases illustrate that Burma has failed to respect these rights. AAPP urges to protect the rights of its citizens by immediately amending PAPPL.

Arbitrary arrests have continued in ethnic areas this October.  Two members of Arakan Youth Conference (AYC) Aung Zaw Lin and Khine Bo Bo Buthidaung Town, and May Yu Tun the member of the Arakan National Party (ANP) in Pauktaw Township were arrested and charged under Section 302 of the Penal Code in regards to the death of a Military Intelligence Corporal in Sittwe Town, Arakan State. Arresting youths from these organizations creates concerns for political freedom as it suppresses their political participation. These actions contravene International Laws, ICCPR and as well as local law, and the 2008 Constitution. Therefore, AAPP urges the Government to immediately release these activists and show the Government is committed to protecting the freedom and security of its citizens.

In addition, arresting, charging and sentencing civilians for unlawful association or without probable cause restricts the freedoms of citizens and infringes on their basic human rights. The following incidents from October highlight the ongoing issue of arbitrary arrests, sentences and unlawful charges under vague and repressive laws.

Principle 10 of the Body of Principles for the Protection of All Persons under Any Form of Detention or Imprisonment stipulates that, “anyone who is arrested shall be informed at the time of his arrest of the reason for his arrest and shall be promptly informed of any charges against him”. However, those who are arbitrarily arrested do not know why they are detained, and thus have their basic rights infringed. As long as the Government is unable to solve these problems, the National Reconciliation process will remain delayed. Therefore, AAPP calls on the Government to release all the people who have been arrested, charged and sentenced and show that the Government is committed to the rights of the ethnic minorities and to National Reconciliation.

Land confiscations and disputes continued to occur this October.

On October 6, President U Win Myint told department officers in Magway Townhall that solving confiscated land issues without corruption is imperative to making sure farmers do not have any grievances with the process. However, from our observations, land disputes have not ceased. Problems related to receiving compensation, the full amount of compensation, or the proper confiscated land back continue. Because of these problems, their livelihood and social life suffer. Burma signed an agreement of the ICESCR, so it should comply and follow its regulations. Therefore, AAPP urges the Government to protect its farmers by enacting an effective farmland law and protect the rights of its farmers.

What Is Transitional Justice Fact Sheet

Estimating Trafficking of Myanmar Women for Forced Marriage and Childbearing...
Scroll to top