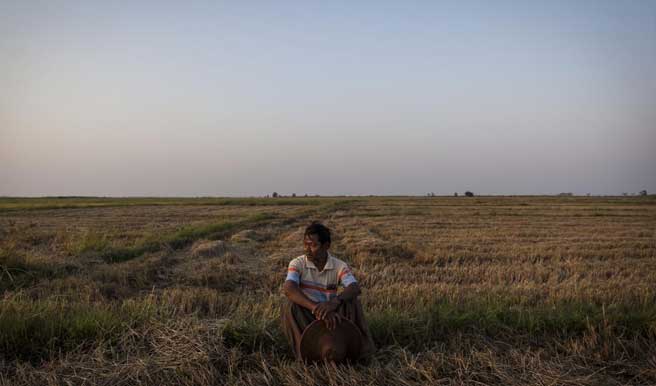 Disputes over land remain one of the central challenges in Myanmar’s evolving reform process. Land confiscations and forced evictions were a major feature of decades of military rule and internal armed conflict. Small farmers bore the brunt as government officials, military commanders, and their cronies seized land for personal and institutional enrichment; authorities promoted development plans without regard for those affected; and the military and ethnic armed groups took advantage of fighting and displacement to grab vast swathes of territory.

Despite some protections under the law, government officials frequently confiscated land while providing limited or no notice and no compensation, often instantly depriving farmers of their only source of income and regular source of food.[1] As a result, countless rural families struggled to pay for food, health care, and their children’s education. While the National League for Democracy (NLD) government, which took power in March 2016, has redoubled efforts to address the issue, large numbers of farmers have been left in the lurch, their livelihoods taken from them and their family’s future uncertain.

The total number of acres illegally confiscated in recent decades is unknown, but estimates are in the millions. In 2016, a government official, citing the findings of the Farmers Affairs Committee in the Upper House of Parliament, said “as many as 2 million acres of land across Burma could be considered ‘confiscated.’”[2]

Myanmar’s population remains concentrated in rural areas where farming is the primary means of obtaining a livelihood.[3] Land confiscations have had a disproportionate impact on rural farmers, most of whom own modest plots of land. As Myanmar’s larger reform process has led to increased media freedoms and less enforcement of laws restricting public protests, once-suppressed grievances have risen to the surface, leading to greater activism and widespread calls for land reform.

Recognizing the gravity of the problem, the Myanmar government has in recent years undertaken several initiatives to address land confiscations by investigating claims and recommending compensation or the return of land.

In 2012, the military-installed parliament established the Farmland Investigation Commission, an initiative seemingly begun with an eye on public opinion as the country moved toward multi-party elections. The commission investigated cases of land confiscation from as far back as 1988.[4] In 2013, the Land Utilization Management Central Committee was established to implement the recommendations of the Farmland Investigation Commission.[5] Both were dissolved in 2016, shortly after the NLD, led by Aung San Suu Kyi, took power after overwhelmingly winning national parliamentary elections on November 8, 2015.[6]

During its roughly four years of operation, the Farmland Investigation Commission claims to have received some 20,000 complaints, though estimates of the number of complaints received, reviewed, and left unresolved by the commission vary widely.[7] According to the commission’s secretary-general, as of June 2015, the commission had heard thousands of cases and returned over 335,000 acres of land, benefitting more than 30,000 families. But according to Namati, a local charity that works on land issues in Myanmar, of the cases the commission reviewed, many were reportedly “collective cases”—those in which claims were made on behalf of a group of people or a community—and just 4 percent of complainants were deemed entitled to compensation.[8]

Several other reforms were also instituted in the years before the NLD took power. Two new land laws were passed in 2012: the Farmland Law and the Virgin, Fallow, Vacant Management Law.[10] Under the 2008 Myanmar constitution, all land is officially the property of the state, yet together these laws created something akin to a private property system. However, protections against land confiscation were still relatively weak.[11] In January 2016, the outgoing cabinet adopted the National Land Use Policy. Although it is not binding, the policy could provide a partial roadmap for the reform of Myanmar’s land laws.[12] So far, implementation of the National Land Use Policy has been scant, though in January 2018 the government established the National Land Use Council, which provides for the creation of committees to assist carrying out the land use policy.[13]

After taking office in March 2016, the NLD, which had made land issues a central plank in its 2015 election manifesto (saying that the party would “strive” to return “illegally-lost land” and make “payment[s] of compensation and restitution”) moved quickly to address land issues.[14] On June 6, 2016, the government created the “Central Reinvestigation Committee for Confiscated Farmlands and Other Lands” (the “Reinvestigation Committee”). The government hastily declared that it would solve all land confiscation issues within six months.[15] Since then, the government claims to have settled thousands of claims, though thousands more cases have been filed and remain unresolved in addition to the 5,000 or so cases left unresolved by the previous government’s commission.[16]

Since establishing the Reinvestigation Committee, the government has taken steps to reform the process of resolving land confiscation cases. One important feature of the Reinvestigation Committee is that it provides an opportunity for participation by civil society groups on committees established at different administrative levels. It has reserved seats on committees at each administrative level—state/region, district, township, and village tract—for nongovernmental representatives, including some for civil society groups. In doing this the NLD has signaled a commitment to a more inclusive and fair process for resolving often complex land issues.[17] However, research conducted by civil society groups indicates that some of these committees remain ineffective or inactive, particularly the committees established below the township level.[18] In February 2018, the government also formed four groups to monitor the activities of the Reinvestigation Committee, but those committees are comprised solely of government officials.[19]

However, for many of those dispossessed of their land, there has yet to be any positive result. While tens of thousands of acres were released following the recommendation of the Farmland Investigation Commission to the various ministries, the actual return of land to small farmers and villagers has proven more complicated, leaving land and villagers in limbo. Hundreds of people have been arrested by the police, which remains under military control, for staging protests as they await the resolution of their claims.[20] Many protesters have been charged with trespassing and vandalism, among other crimes. In some cases, the courts have handed down prison sentences.[21]

It is not surprising that the NLD government has struggled to solve the myriad longstanding problems associated with Myanmar’s confusing land laws and knot of competing claims. Many cases are extremely complicated, as military land confiscations were followed by sales to corporations and businesses, followed by additional sales to others, making it difficult to create a system that is fair to the original owners, subsequent tenants, and those who later bought the land in good faith. During different periods of Myanmar’s history, dozens of laws were enacted, making the body of laws regulating land acquisition and sales a confusing web of overlapping, and sometimes contradictory, rules difficult to navigate by the vast majority of people it affects. And given the powerful individuals and institutions involved in past land transfers, many farmers and land rights activists have little hope the NLD can quickly solve the problem.[22]

Since 2016, the NLD-led government has both ratified the International Covenant on Economic, Social and Cultural Rights (ICESCR) and proposed several amendments to laws that affect ownership and use of land. Being a party to the ICESCR carries with it additional obligations under international law, particularly with respect to ensuring the rights to adequate housing and an adequate standard of living, and protections against forced evictions.[23]

The amendments proposed and discussed by the government include the cornerstones of a body of some 70 laws that regulate land use: the Farmland Law, the Vacant Fallow and Virgin Land Management Law, and the 1984 Land Acquisition Act. An attempt to reform the 2012 Farmland Law by the parliament in 2017 was met with widespread criticism from local and international nongovernmental organizations for failing to allow for proper consultation from communities. They also criticized the proposed amendments for failing to adequately protect land tenure security and for failing to conform with the National Land Use Policy, among other shortfalls. [24] The process of amending the Land Acquisition Act also continues. Amendments to the act circulated in 2017 were criticized for incorporating overly broad and ambiguous language pertaining to acquisitions for a “public purpose,” and for legalizing “urgent” acquisitions that can take place within 48 hours, which could facilitate international law violations.[25] A subsequent amended draft of the same law circulated in mid-2018 provides some additional clarity pertaining to “public purpose” but otherwise retains overly broad and ambiguous language, and similarly sanctions “urgent acquisitions” with few apparent protections for land holders.[26]

This long history of farmers being dispossessed of their land and livelihood without compensation has left countless people in Myanmar destitute, insecure, and frustrated. As Myanmar looks to modernize and attract foreign direct investment, it needs to clarify, harmonize, and streamline its laws and ensure that land tenure is protected. Solving historic land confiscations and disputes will not be easy, but the government, military, and civil society groups should work together to resolve this chronic source of instability and grievance. Myanmar’s future depends on it.