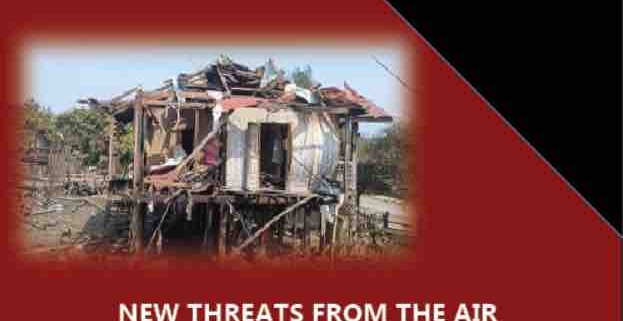 New report maps out SAC war crimes in northern Burma
A new report by the Kachin Women’s Association Thailand (KWAT) provides evidence, including detailed
maps, of war crimes by forces of the State Administration Council (SAC) regime in Kachin State and northern Shan State during the past six months.
“New Threats from the Air” reveals a new and deadly trend of airstrikes over populated villages in Kachin
State, in apparent retaliation for conflict losses along strategic transport routes. Five airstrikes in Putao,
Hpakant and along the Irrawaddy river killed two villagers and injured thirteen, including six children, in
the first few months of this year.
Maps show how SAC troops from the notorious assault divisions ID 33, ID 88 and ID 99, have fired artillery
shells directly into civilian areas. Thirteen shelling incidents during the past six months killed eight villagersand injured twenty, including six children.
Maps also provide evidence of ongoing confidence of impunity for sexual violence by SAC troops. A rape
attempt by a SAC soldier in Kutkai on April 12 took place only a few kilometers from where a soldier from
the same battalion raped an elderly woman in November last year.
The report documents thirteen incidents of indiscriminate shooting by SAC troops, injuring seven civilians
and killing eleven – including a seven-year-old boy killed in his bed in Myitkyina, when troops shot randomly into civilian houses following a bomb explosion in the town.
Twenty-three people have been arbitrarily arrested by SAC forces across Kachin State, including seven
who were severely tortured to make them confess to being members of the Kachin Independence Army
(KIA) or People’s Defence Forces (PDF). Dozens of villagers, including women, have been forced to walk
between SAC troops as human shields in Momauk, Hpakant and Namtu.
Ongoing fighting and SAC abuses have caused new displacement of over 5,700 villagers across northern
Burma during the past six months.
KWAT is calling urgently for increased diplomatic and economic pressure on the military regime to end
their atrocities, and enable the transfer of power to a democratically elected government under a new federalconstitution.