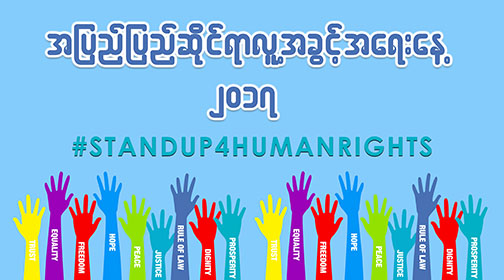 ND-Burma statement on International Human Rights Day: “We are ready to help deliver justice for Burma’s many victims of human rights violations”

With over 6,000 human rights violations recorded since 2004, ND-Burma wants to help bring about justice and national reconciliation

Thirteen years ago, 9 civil society organizations based on the Thai-Burma border came together to form the Network for Human Rights Documentation Corporation (now the Network for Human Rights Documentation, or ND-Burma). Burma was ruled by a brutal military dictatorship and Daw Aung San Suu Kyi entering her tenth year under house arrest. There were well over a thousand political prisoners and the military was continuing its decades’ long campaign of brutal violence against Burma’s ethnic nationalities.

And yet the 9 groups who risked their lives to come together in 2004 knew it didn’t have to be this way, that what was happening to them, to their friends, families and communities was fundamentally wrong, and that they could change it. They were Karen, Shan, and Mon, as well as former political prisoners. They had spent their whole lives under military dictatorship, cut off from the rest of the world, yet they knew that every human being on earth is endowed with fundamental rights and freedoms.

Much has changed since 2004. Daw Aung San Suu Kyi now rules alongside her former jailers. Most of the political prisoners incarcerated then have been released.

Yet much remains the same. Burma’s jails are being filled once again, this time with journalists trying to hold the powerful to account. The military’s campaign of violence against ethnic nationalities continues unabated; ND-Burma has in fact documented an uptick in human rights violations since the civilian government took power. The country is once again facing international condemnation following military campaigns in Rakhine, Shan and Kachin.

In his 2004 report on Burma, the UN Special Rapporteur called for action to hold those guilty of human rights violations accountable. ND-Burma began its work gathering evidence for the day when Burma’s many victims of rights violations would finally see justice. Our database now holds some 6,000 cases. Our friends and colleagues in the many organisations that make up Burma’s formidable civil society have thousands more.

Human rights are universal, as is the pain when they are violated. A woman raped in Kachin suffers no less than one raped in Syria or Sweden. Only those in comfortable positions who can be certain their rights will never be abused would ever argue otherwise.

In 2017, ND-Burma is a 13-member organization whose members represent a range of ethnic nationalities, women and the LGBTI community. We have been documenting human rights abuses and fighting for justice for victims since 2004.

‘I Still Remember’
Scroll to top