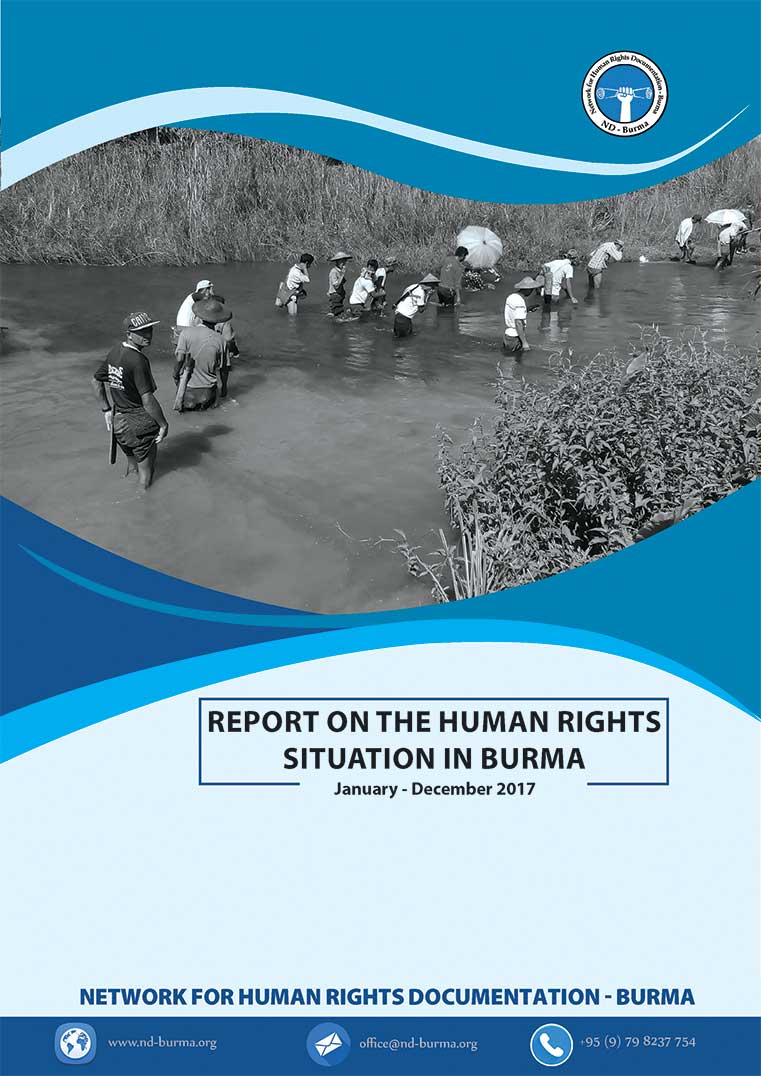 released its 2017 report on the human rights situation, which found that ongoing conflict between the military and ethnic armed organisations has resulted in continued abuses against non-combatants, predominantly by state security forces. The military continues to block civilian attempts to seek justice through pay-offs, efforts to confuse or deceive victims through complicated military administrative procedures, and direct threats.

The press release can be found here in English and here in Burmese.

The report can be found here in English and here in Burmese.

March also saw our partner Asia Justice and Rights release a report examining the ongoing impact of human rights violations on women survivors. The report was co-produced with ND-Burma member theTa’ang Women’s Organisation and our Reparation Working Group member the Vimutti Women’s Organisation. The report can be found here in English and here in Burmese, with a video featuring survivors’ testimonies here.

Former child soldier sentenced to two years in jail for speaking about his experience;
Trial of Ta’ang legal advisor continues despite weak case against him

A former child soldier was sentenced to two years’ imprisonment for giving an interview about his experience of being forcibly conscripted by the Burma army. He was charged under section 505(b) of the Penal Code, which criminalises statements “likely to cause fear or alarm to the public”. Ko Aung Ko Htwe could be facing further charges for reportedly standing on a copy of the 2008 Constitution in protest at his arrest. A link to the interview that landed him the sentence can be found here. Human Rights Watch published a detailed description of the case here.

Meanwhile the trial of Ta’ang legal advisor Mai Myo Aung continued despite three witnesses saying he had not been present at the shooting for which he is being investigated. Mai Myo Aung’s next hearing is on 6 April – this will be the 10th hearing in this case.

Armed clashes occurred between the Burma army and the Karen National Liberation Army (KNLA) – a signatory to the Nationwide Ceasefire Agreement (NCA). According to the Karen Peace Support Network,fighting erupted after the Burma army entered KNLA-controlled territory without receiving prior permission and started to build a military road, dig trenches, and erect barracks. This violates the terms of the NCA and led to some 2,000 people fleeing the fighting. Local leaders of the besieged area signed a petitionto State Counsellor Daw Aung San Suu Kyi calling on troops to immediately withdraw and end road construction.

The government said it would provide over 120m kyats in funding to IDPs in Myaing Gyi Ngu IDP camp in Karen State. The Department of Social Welfare said 1,117 people would receive 100,00 kyats each and 76 households would receive 200,000 kyats.

In Shan State, a local NGO documented the murder of two civilians and the torture of another by Burma army soldiers.

Burma’s President U Htin Kyaw stepped down from his post, citing health reasons. U Win Myint was elected as the country’s new President and vowed in his inauguration speech that his government would“try its best, with full impartiality, to bring about democracy and the respect for human rights that our people long for.”

The army reiterated its commitment to preserving section 59(f) of the Constitution, which indirectly bars Daw Aung San Suu Kyi from assuming the presidency. The military’s unofficial political arm, the Union Solidarity and Development Party (USDP), claimed it has been the victim of “democratic bullying” by the NLD and says it was ok to label the party “nationalist.” The military’s Commander-in-Chief warned that people are “inciting hatred” against the army despite the fact that it is continuously taking steps to ensure the country enjoys “eternal peace”.

The upper house of Parliament approved a tightening of the Peaceful Assembly and Peaceful Procession Law, which has been criticised by rights groups for being used to jail activists. The amendments include one revision which could result in imprisonment for “anyone who instigates, tempts or persuades others intentionally or knowingly [joins a demonstration] to disrupt national security, the rule of law, tranquility and public morale”. The bill will now return to the lower house, from where it will pass to the President to be signed into law unless there is objection from MPs.

The government is also considering a Draft Law on International Non-Governmental Organizations, which would give it greater oversight over the work of international organisations and NGOs. An interview with an NLD spokesperson on the law can be found here. The parliament also approved a $7.8m body to monitor the internet for people who use it to “harm the stability” of the country.

The Chair of the UN Fact Finding Mission, tasked with investigating allegations of human rights violations in Burma, said the evidence investigators had collected pointed to “crimes against humanity” having been committed by government security forces. After describing harrowing accounts of victims, he said:

“The road to peace may be long and painful, but it is achievable. It starts with acknowledgment – acknowledgement of people’s existence, their identity, their suffering, and their human rights. It must be accompanied by remedies – action to restore to the extent possible, to compensate, and to bring justice. Both are necessary to prevent further violations.”

The UN Special Rapporteur on Myanmar also released her report on the human rights situation and called for accountability for perpetrators of mass abuses. The report describes in detail the situation in the country and should be read in full here. The UN human rights chief echoed the call for accountability. An EU-sponsored resolution at the UN Human Rights Council extending the mandate of the Special Rapporteur was rejected and the government said the General who ran the operations in Rakhine State was being investigated alongside other members of the security forces.

Humanitarian aid groups in Burma face the most difficulties reaching people in need, according to a study.

ND-Burma member the Assistance Association for Political Prisoners (AAPP) opened a new museum in Yangon documenting the struggle of current and former political prisoners. According to AAPP’s records, there were 248 political prisoners in Burma at the end of March, with 54 serving time and 194 awaiting trial.

A survey conducted by the My Justice legal NGO found that two thirds of people view the law as a means of controlling society, as opposed to protecting individual rights. An informative breakdown of the result can be found here.

Here a helpful interactive tool from local NGO The Ananda to understand how laws are made in Burma.

The New Mon State Party (NMSP), one of two groups to sign the NCA in February this year, has beenprevented from holding public consultations by the military, which has led to the NMSP having to cancel the national-level political dialogue it planned to hold on 6 April. Public consultations are a way for signatory groups to get local input before holding national-level political dialogues, which then feed into the Panglong peace sessions.

The other armed group to sign the NCA in February, the Lahu Democratic Union (LDU), said it would try toestablish a Lahu self-administered zone.

Two rival armed groups in northern Shan State have clashed throughout March, displacing hundreds and killing two civilians. The Restoration Council of Shan State/Shan State Army – South (RCSS/SSA-S) and Ta’ang National Liberation Army (TNLA) have had armed clashes since 2015, when the RCSS/SSA-S signed the NCA, and fighting has intensified in recent months.

IDPs who were displaced by fighting between the Arakan Army and government forces two months ago started to return to Burma.

Villagers in northern Karen State protested against a proposed dam project on the Salween River, saying it would harm the natural beauty of the area and negatively affect livelihoods.

Some 600 protesters in Rakhine State demanded compensation for land that had been confiscated as part of the $2.5 billion Sino-Myanmar Shwe pipeline and deep-water port project, a part of China’s wider “Belt and Road” initiative

Cheery Zahau, Daw Khin Than Htwe and Ko Swe Win received the EU’s Shuman Award for human rights.Ko Swe Win, who is the Editor of Myanmar Now, said upon accepting his award that only the promotion of human rights could stop growing intolerance and hostility in society.

The Ministry of Ethnic Affairs together with the private sector established the Myanmar Ethnic Entrepreneur Association to promote economic development in the country’s ethnic regions.

The Irrawaddy regional government has said it will fully finance the 2019 Chin national day celebrations in line with Article 13 of the Ethnic Rights Protection Law. Chin national day is held on 20 February every year and was financed by donations in 2018.

Myanmar to free more than 8,000 prisoners in New Year amnesty
Scroll to top