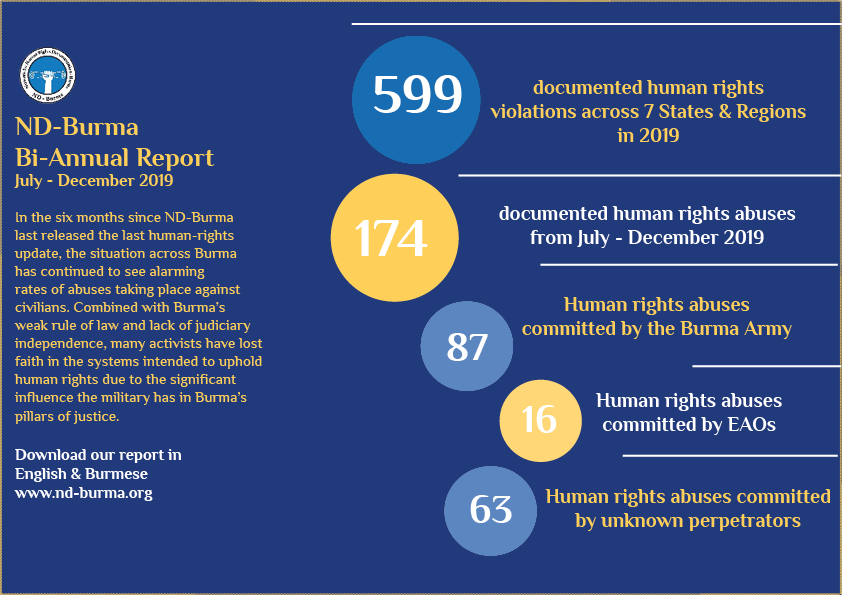 The latest report by the Network for Human Rights Documentation-Burma (ND-Burma) details testimonies and analysis on the decline of civilian safety
in Burma. Throughout the reporting period of July to December 2019, ND-Burma members documented 174 human rights violations with an alarming number of clashes in Rakhine and northern Shan States, as well as a notable decline in basic rights and freedoms. ND-Burma has concluded that the delays to a successful transition to a free, fair and democratic Burma are compromised by the Burma Army’s reluctance to give up power.

Rising tensions between the Burma Army and Ethnic Armed Organizations (EAOs) has contributed to a growing fabric of misjustice and engrained impunity from the country’s state actors. Ceasefires have been agreed upon and violated against the backdrop of faltering peace negotiations. Additionally, hostilities have been heightened by a combination of new alliances and a lack of accountability for the injustices that have taken place. Warfare was particularly active in northern Rakhine and Shan State townships with the main perpetrators of rights abuses being the Burma Army. Civilians sustained serious injuries and in many cases death from landmines, inhuman treatment while being detained and arbitrarily arrested as well as indiscriminate shelling and gunfire in civilian areas. These abuses are all exacerbated by an unstable security situation.

Not only is an urgent end to the conflict in Burma long overdue, but so are reforms to the law. In our latest report, ND-Burma makes recommendations for strengthened accountability mechanisms to hold perpetrators of injustices accountable.

What is the situation of political prisoners in Myanmar after their release...
Scroll to top