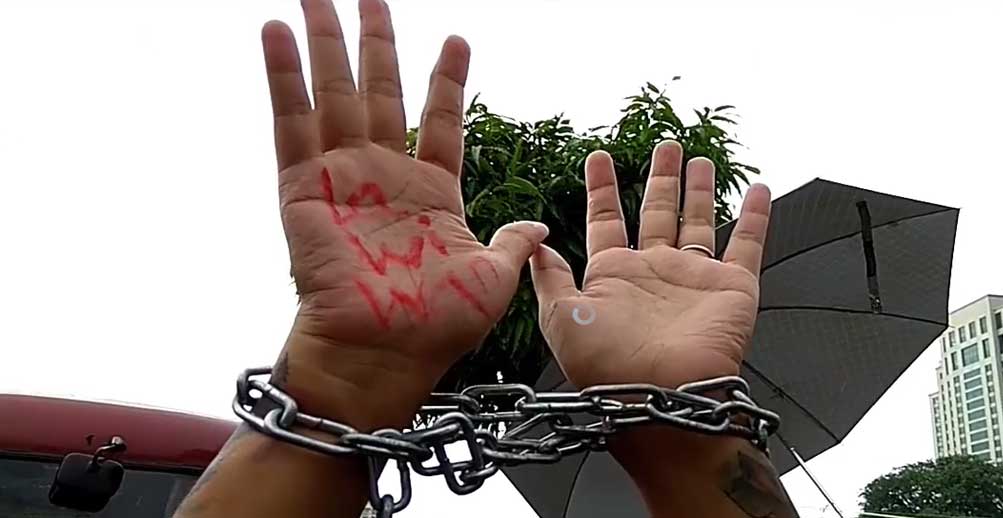 To mark the International Day in Support of Victims of Torture on 26 June, ND-Burma co-organized an event in Yangon with the Association of Political Prisoners (AAPP), the Women’s League of Burma (WLB), the Vimutti Women’s Organization (VWO), and Asia Justice and Rights (AJAR). At the event torture survivors and civil society organizations working with them gave their testimonies and outlined what support the Government needs to provide in order for victims to rebuild their lives.

Survivors and civil society organizations documenting human rights abuses stressed that torture is an ongoing practice in Burma and is especially prevalent in ethnic nationality areas. The organizers called on the Government to put an end to state sanctioned torture, to sign the UN Convention Against Torture, and to include the issue of reparations and rehabilitation for torture survivors in peace process discussions. The first Burmese translation of the UN Convention Against Torture was also launched at the event.

The full statement released on the day can be found here.

On 29 June ND-Burma joined 60 local and international right organizations in calling on the Government to repeal the vaguely worded Article 66d of the Telecommunications Law, which has repeatedly been used to stifle criticism of the Government and the military.

The Committee to Protect Journalists had earlier this month said it had received assurances from the Ministry of Information that the Government would be removing the most punitive elements of the law. However, the law continued to be used to silence journalists in June. This month also saw three journalistsarrested under the Unlawful Association Act 17(1) for meeting with ethnic armed organizations while reporting on a story.

ND-Burma and its Reparations Working Group held their 3rd Reparations workshop in Yangon on 8-10 June.  Members discussed their findings from the victim needs assessments they have been conducting across Burma over the last 6 months. These found that survivors and their families predominantly want recognition of what happened, rehabilitation to rebuild their lives, and reform of laws and institutions to ensure Burma finally puts an end to systemic human rights violations. Members therefore reiterated the Working Group’s focus on reparations as opposed to criminal justice.

The Reparations Working Group is made up of ND-Burma’s 13 members as well as the following civil society organizations: Genuine Public Servants, Open Myanmar Initiative, Vimutti Women’s Organization, Future Light Center and the ‘88 Generation, as well as independent human rights activists.

To mark the International Day for the Elimination of Sexual Violence in Conflict on 16 June a number of local groups advocating for women’s rights held an event in Yangon which highlighted that rape by security forces continues unpunished in Burma.

Nang Pu, founder of the Kachin State Women’s Network and Director of the Kachin-based Htoi Gender and Development Foundation, said:  “Not taking action against the perpetrators is the same as allowing them to commit rape.”

Women political prisoners demand recognition of their contribution to democracy

On 21 June, ND-Burma Reparations Working Group member the Vimutti Women Organization held anevent In Yangon bringing together former women political prisoners who called for recognition of the sacrifices they have made in the struggle for democracy. Former prisoner of conscience Daw Aye Aye Than said: “People think we have gained democracy easily, but we believe people, especially the younger generation, should know that such achievements have been yielded from those who made sacrifices.”

In a positive move, the end of June saw the start of a Government investigation into whether 140 acres of land seized by former government officials in Dekkhinathiri, Naypyitaw, should be returned to their original owners. The Committee on Confiscated Farmlands and Other Lands is investigating to see whether the land is being cultivated and if not may be able to return it to the farmers under the Vacant Land Management Law. The farmers say they received very little or no compensation from the former officials. Lower House Speaker U Win Myint said: “I ask this to demand fairness and justice for those who had their lands confiscated unfairly.”

As of March 2017 the Central Review Committee on Confiscated Farm Lands had received a total of 3,980 complaints, of which it has settled 212.

June also saw a number of farmers being compensated for land that had been seized in Magway region to make space for housing for Government officials. The Kachin parliament also voted to reclaim vacant land that was seized and redistribute it to the original owners.

About ND-Burma
ND-Burma is a 13-member organization whose members represent a range of ethnic nationalities, as well as women and the LGBTI community. We have been documenting human rights abuses and fighting for justice for victims since 2004.