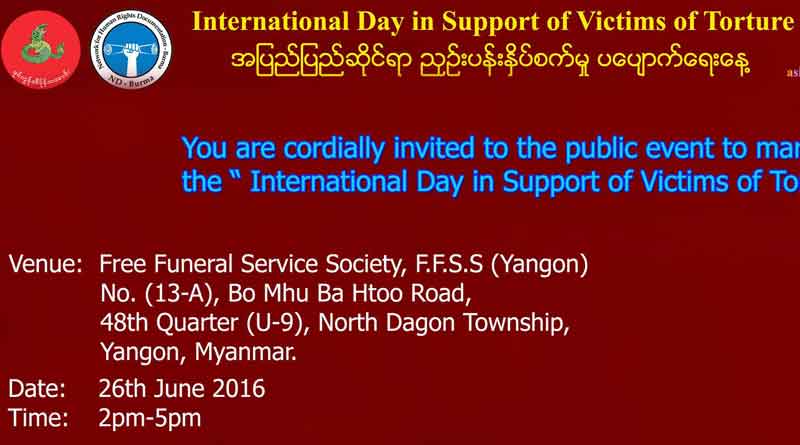 Today, June 26, is International Day in Support of Victims of Torture. ND-Burma expresses our solidarity with and support for the hundreds of thousands of victims of torture and their families throughout the world. On this day, we feel it is important to bring light to the torture still being perpetrated in Burma and call for immediate action by the government to bring an end to these atrocious acts.

Torture was, and still is used in Burma as a weapon to suppress dissent by denying victims the inherent dignity of the human being. Torture has a lasting impact on the victim’s physical and psychological well-being and often exposes them to lasting trauma. In Burma, torture has routinely been perpetrated against political prisoners and members of ethnic minorities particularly in conflict areas. While there is hope for improvements in human rights under a new government who has promised to make national reconciliation a priority, ND-Burma continues to document cases of torture throughout the country.

Torture has been carried out systematically in prisons and detention centers in Burma for years. Political prisoners, especially, have been subjected to a variety of methods of torture. A recent report by the Assistance Association for Political Prisoners (AAPP) and Former Political Prisoner Society (FPPS) demonstrated the systematic and widespread nature of torture in Burma, with 72 percent of former political prisoners surveyed reported having been subject to physical torture and 75 percent to psychological torture. The report details various methods of torture including beatings with rods and chains, hooding, forced stress positions, genital mutilation, electric shocks, sleep deprivation and solitary confinement. Victims of these abuses remain throughout the country in desperate need of support and rehabilitation.

The extent of the use of torture in Burma is particularly pronounced in areas with non-signatory ethnic armed organizations (EAOs). The intensification of ongoing conflict between EAOs and the Burma Army has caused many human rights violations, including arbitrary detention – often justified under the Unlawful Association Act – and torture. One torture survivor, arrested by the Burma Army outside his house in Kachin State in December 2011, was accused of being an insurgent and tortured to extract a confession. “Even though I denied being an insurgent member and insisted I was a civilian, they slashed me with a dagger each time I denied it. They slashed my neck with the dagger six times in total. After this they tortured me to the point of disfiguration. They kept me tied up for five days and starved me.” This man’s detention, interrogation and torture lasted for over two months before he was sentenced to two years imprisonment under the Unlawful Association Act.

Ta’ang Women’s Organization (TWO) and Ta’ang Students and Youth Organisation (TSYU) continue to document cases of arbitrary arrest and torture by the Burma Army and EAOs across Shan State. Just this month, the Shan Human Rights Foundation documented the torture of five villagers from Shan State by the Burma Army, two of them under suspicion of being Shan rebel fighters. Moreover, they accused the Burma Army of having killed three civilians during clashes with the SSPP/SSA-N. In Kachin State, two villagers from Waingmaw Township, reported that they were detained and tortured by the Burma Army under suspicion of being members of the Kachin Independent Army (KIA) on May 23. The severe beating of a civilian by four police was also reported in Arakan State on May 25. Unfortunately, these are not isolated cases, and are common practice during clashes between the Burma army and EAOs.

Torture is strictly prohibited under international law. Article 5 of the Universal Declaration of Human Rights (UDHR) states that “no one shall be subjected to torture or to cruel, inhuman or degrading treatment or punishment.” As a UN member state, Burma is obliged to adhere to this standard. The Convention Against Torture and other Cruel, Inhuman or Degrading Treatment or Punishment (CAT) and its Optional Protocol (OPCAT) further embeds the illegality of torture and obligates states that ratify them to take measures to prevent acts of torture as well as to provide all torture victims with effective and prompt redress, compensation and appropriate social, psychological, medical and other forms of rehabilitation. Under OPCAT these measures are to be periodically reviewed by an independent monitoring body. Currently Burma has not signed or ratified the convention or its optional protocol.

In the spirit of the International Day in Support of Victims of Torture, ND-Burma urges the government to:

Ratification of key human right treaties will demonstrate the government’s commitment to bring a permanent end to the practice of torture in Burma.

“After release I had to restart my life from the beginning” The Experiences...

Acknowledgment and Rehabilitation of Torture Survivors is Key to Building Peace...
Scroll to top